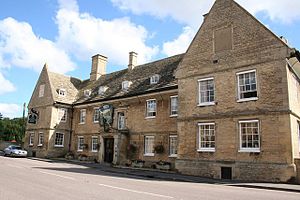 The Haycock, Wansford in England

Wansford, sometimes Wansford-in-England[1] is a village just off the Great North Road (A1) near Peterborough and eight miles south of Stamford. Wansford station, 1.5 miles S.E. of the centre of the village, is the home of the Nene Valley Railway.

The Haycock hotel, a coaching inn, is situated to the south of the stone bridge over the River Nene. 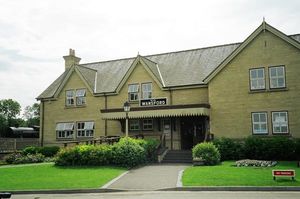 Wansford is actually two separate villages under different parish councils. Wansford Parish Council, within the area of Peterborough Unitary Authority, comprises the village north of, and including, Wansford Old Bridge.

The village to the south of Wansford Old Bridge (The Haycock side) is represented by Sibson-cum-Stibbington Parish Council and comes under Huntingdonshire District Council. Wansford station is actually in Stibbington parish. There is a GP surgery, Wansford and Kings Cliffe Practice on Yarwell Road, to the north of the river.

It was split between two counties until 1965-1974 when it became under one authority, (Huntingdon and Peterborough). The boundary post between the Soke of Peterborough (the north side of the Nene) and Huntingdonshire (the south bank) is still there halfway across the bridge.[2]

On 2 May 2007 the helicopter of Phillip Carter, entrepreneur and owner of the Haycock, was found, crashed nearby in woods at Kings Cliffe.

According to local folklore, the name Wansford-in-England comes from the tale of a local man who fell asleep on a hayrick and upon awakening found himself floating down the River Nene. He asked a traveller on the riverbank where he was, and upon hearing the reply "Wansford", asked, "Wansford in England?". The name stuck.[3]