From Infogalactic: the planetary knowledge core
Jump to: navigation, search
This article is about the district of Rostock in Germany. For the German discus thrower, see Wolfgang Warnemünde.

Warnemünde (German pronunciation: [vaʁnəˈmʏndə], literally Mouth of the Warnow) is a seaside resort and a district of the city of Rostock in Mecklenburg, Germany. It is located on the Baltic Sea and, as the name implies, at the estuary of the river Warnow.

Founded in about 1200, Warnemünde was for centuries a small fishing village with minor importance for the economic and cultural development of the region. In 1323 Warnemünde lost its autonomous status as it was purchased by the city of Rostock in order to safeguard the city's access to the Baltic Sea. It was not until the 19th century that Warnemünde began to develop into an important seaside resort. Today Warnemünde has approximately 8,400 inhabitants.

Once completely dependent on the fishing industry, Warnemünde's economic alignment has shifted inevitably from the primary to the secondary and tertiary sector. Besides the Nordic Yards Warnemünde ship yard ( the former Warnowwerft ), the economy largely depends on tourism. The construction of a modern cruise line centre in 2005 has contributed crucially to Warnemünde's establishment as the most important harbour for cruise line ships in Germany.

Warnemünde was formerly the site of the original LFG aircraft factories during World War I. Prior to World War II a number of other companies, mostly related in some way to the now bankrupt LFG, started operations in the area. These included Heinkel and Arado Flugzeugwerke. The factories and surrounding living areas were bombed several times during the war. Many of these factories were used to form Warnow Werft.

File:Teepott1.jpg
The lighthouse and Teepott 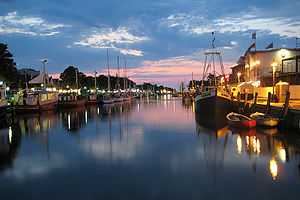 Being a centre of maritime traffic, the district of Warnemünde comprises numerous navigational aids, the oldest being the lighthouse, built in 1897, and still currently in use. In the summer, the tower, approximately 37 metres (121 ft) high, allows visitors to enjoy an impressive view over the Baltic Sea and the northern districts of Rostock. Warnemünde's other famous landmark, the nearby Teepott (Teapot in German) with its Hyparschale-curved roof, is an interesting living example of East German architecture. Built in Bauhausstile and opened for the first time in 1926, it burned down at the end of WWII. Rebuilt in the 1960s with a curved roof and renovated in 2002, it today houses various restaurants. 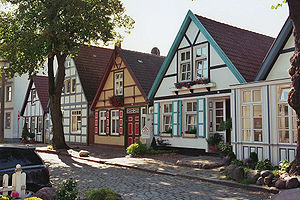 Typical old fishermen houses in the oldtown of Warnemünde.

In the vicinity of the canal called der Alte Strom (Old Channel), with its various restaurants, pubs and traditional fishing boats, regional specialties are offered in a fish market. At Am Strom 53 you will find the Edvard Munch House, where the famous norwegian painter of The scream lived from 1907 to 1908.

Warnemünde's large, sandy beaches are the broadest on the German Baltic Sea coast and stretch out over a length of 3 kilometres (1.9 mi).

There is a simple 1:1 billion scale model of the Solar System, the Warnemünder Planetenwanderweg,[1][2] with a 1.4m diameter sphere as a model of the Sun installed near the light house, and signs with true scale depictions of the planets at the appropriate distances of their orbits along a coastal walking trail westwards. Some of these signs are over a kilometre apart, and the total length of the Planetenwanderweg is close to 6 km (5,870m). The model includes Pluto and has not been updated since Pluto was reclassified as a dwarf planet. Walking along the Planetenwanderweg allows hikers to get an intuitive idea of the relative distances between the orbits of the planets and the Sun.

The district of Warnemünde has a Baltic-influenced oceanic climate (Cfb) according to the Köppen climate classification system.

There are a lot of musicians and bands in Warnemünde who are involved in cultural events.

Because of the low current and good sailing conditions, Warnemünde is one of the best sailing grounds in Germany. The beach is especially good for kitesurfing, windsurfing, underwater diving, swimming and nordic walking. In the summertime there are a lot of international competitions like the yearly sailing event Warnemünde Week in July. Many people flock to Warnemunde to witness these competitions.