From Infogalactic: the planetary knowledge core
Jump to: navigation, search
For other uses, see Watergardens (disambiguation). 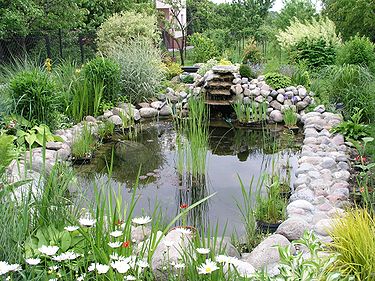 A water garden in a private residence

Water gardens, also known as aquatic gardens, are a type of man-made water feature. They can be defined as any interior or exterior landscape or architectural element whose primary purpose is to house, display, or propagate a particular species or variety of aquatic plant. The primary focus is on plants, but they will sometimes also house ornamental fish, in which case the feature will be a fish pond.

Water gardening is gardening that is concerned with growing plants adapted to pools and ponds. Although water gardens can be almost any size or depth, they are typically small and relatively shallow, generally less than twenty inches in depth. This is because most aquatic plants are depth sensitive and require a specific water depth in order to thrive. The particular species inhabiting each water garden will ultimately determine the actual surface area and depth required. 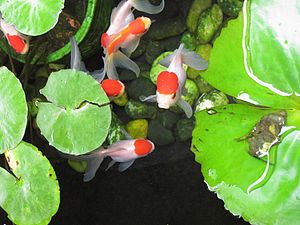 When the aquatic flora and fauna are balanced, an aquatic ecosystem is created that will support sustainable water quality and clarity. Elements such as fountains, statues, waterfalls, boulders, underwater lighting, lining treatments, edging details, watercourses, and in-water and bankside planting can add visual interest and help to integrate the water garden with the local landscape and environment.

Water gardens, and water features in general, have been a part of public and private gardens since ancient Persian gardens and Chinese gardens. For instance, the (c. 304) Nanfang Caomu Zhuang records cultivating Chinese spinach on floating gardens. Water features have been present and well represented in every era and in every culture that has included gardens in their landscape and architectural environments. Up until the rise of the industrial age, when the modern water pump was introduced, water was not recirculated but was diverted from rivers and springs into the water garden, from which it exited into agricultural fields or natural watercourses. Historically, water features were used to enable plant and fish production both for food purposes and for ornamental aesthetics.

Though the term "water garden" is normally used to describe a particular type of natural or man-made water feature that is used for a relatively specific purpose, there are many other types, styles and designs of water feature. 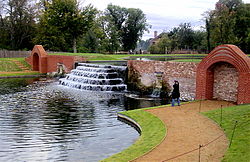 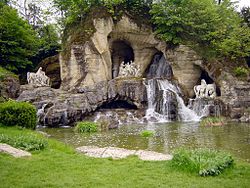 Bosquet of the baths of Apollo, in the gardens of Versailles 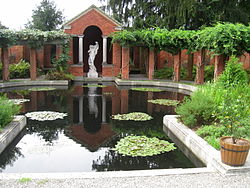 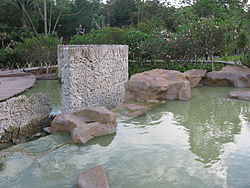 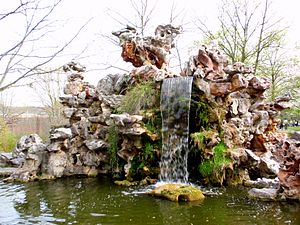 The sixteenth century in Europe saw a renewed interest in Greek thought and philosophy, including the works of Hero of Alexandria about hydraulics and pneumatics. His devices, such as temple doors operated by invisible weights or flowing liquids, and mechanical singing birds powered by steam, motivated several European palaces to create similar clever devices to enhance their public image.

In Italy several royal houses constructed large water gardens incorporating mechanical devices in water settings. The best-known is the Villa d'Este at Tivoli, constructed in 1550 AD. A hill cascaded with many fountains and grottoes, some with water-driven figures that moved or spouted water. Popularity spread across Europe with the well-known water garden at Hellbrunn Palace built with many water-powered human and animal performing figures and puppet theaters, and folly fountains that erupted without notice to surprise visitors.[1]

On a constructed stream, placing rocks in the path of the water makes small patterns, rapids and waterfalls. The rocks disrupt the waterflow, causing splashing and bubbles that can make pleasant sounds and micro-habitats for plants, fish, and wildlife. Well-placed rocks can create splashing water that adds oxygen to prevent hypoxia: the more bubbles, the more dissolved oxygen in the water. 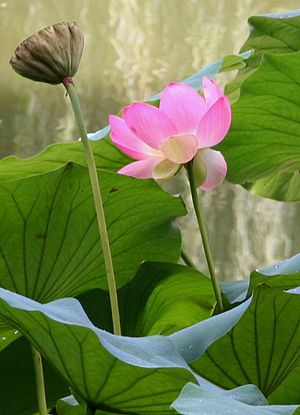 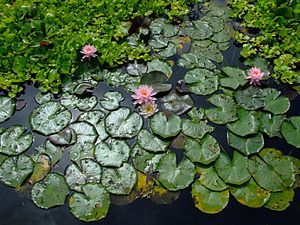 Some areas of the United States do not allow certain of these plants to be sold or kept, as they have become invasive species in warmer areas of the country, such as Florida and California.

Algae are found in almost all ponds. There are hundreds of species of algae that can grow in garden ponds, but they are usually noticed only when they become abundant. Algae often grow in very high densities in ponds because of the high nutrient levels that are typical of garden ponds. Generally, algae attaches itself to the sides of the pond and remains innocuous. Some species of algae, such as "blanket weed", can grow up to a foot a day under ideal conditions and can rapidly clog a garden pond. On the other hand, free floating algae are microscopic and are what cause pond water to appear green. Blanket weed, although unsightly, is actually a sign that the water is clean and well-balanced. Green water (free floating algae) means there are too many nutrients in the water, usually from rotting vegetation or too many fish for the space. Killing the free floating algae with chemicals will often cause it to die, rot, and then make the problem even worse as more nutrients enter the water. Adding more floating or submerged (unpotted) plants can help with the green water, as they can take the nutrients out of the water. There are also filters that can be installed to remove the nutrients and all types of algae from the water. Many ponds naturally go green early in the spring and then clear up. 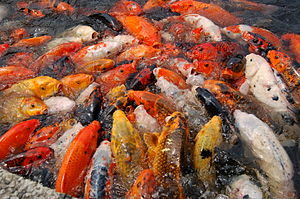 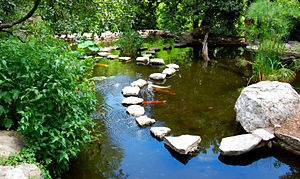 Fishpond with stepping stones and stream 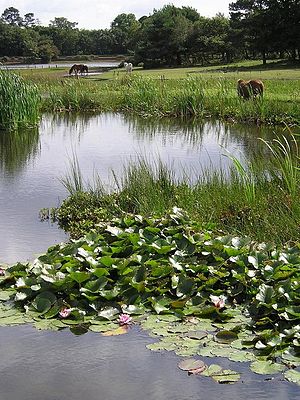 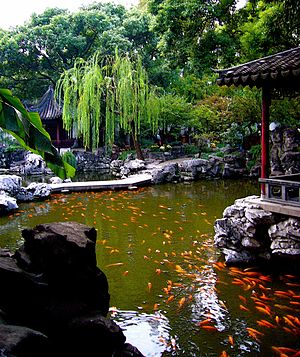 Fish in a pond in Yuyuan Garden, Shanghai

Often the reason for having a pond in a garden is to keep fish, often koi, though many people keep goldfish. Both are hardy, colorful fish which require no special heating, provided the pond is located in an area which does not have extremes of temperature that would affect the fish. If fish are kept, pumps and filtration devices are usually needed in order to keep enough oxygen in the water to support them. In winter, a small heater may need to be used in cold climates to keep the water from freezing solid. Examples of common pond fish include:

Small aquatic snails are usually found in ponds that contain plants. Some people purchase apple snails to keep in their water garden. "Melantho snails" of the genus Lymnaea are also used.

Ponds located in suburban and rural areas often attract amphibians such as Common Frogs and Fire Salamanders and reptiles such as turtles, lizards, and snakes.

Garden ponds can attract attention from predators such as (in North America) raccoons, herons, snakes, and domestic cats. These predators can be a danger to fish. Owners of koi are often particularly careful to create protected areas as some varieties are very expensive. 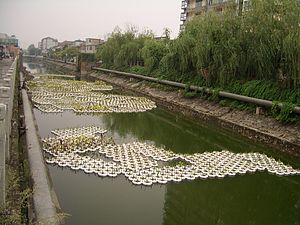 Water plants cultivated in the Yangzhuanghe Canal in Yangzhou, China