Wayman Elbridge Adams (September 23, 1883 – 1959)[1] was an American Painter who was born in Muncie, Indiana, that demonstrated a keen interest in drawing and painting throughout his early years. Adams later received formal instruction in the arts at the Herron School of Art of Indianapolis. Thereafter, he continued his studies under the guidance of master painter William Merritt Chase in Florence. Adams continued to thrive as an artist, later continuing his travels while advancing his skills as an oil painter focusing on figures, genre, murals and portraits.[citation needed]

During his career, Adams lived and worked in New York, as well as in California, becoming well known throughout artistic circles across the United States for his rapid approach to painting stylized portraits of very prominent persons, including authors, painters and political leaders. Adams approach to portraiture earned him a nickname of "lightning" among artists and educators, as his portraits were often completed in one sitting. 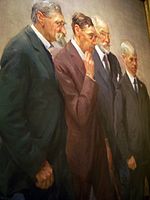 Adams' career flourished, especially after completing the portrait of Booth Tarkington. This study brought Adams national recognition as a gifted professional portraiture artist. Notwithstanding the attention to portraits of important figures from all walks of life, Adams lesser known studies revolving around ethnicity constituted one of the most intriguing aspects of his work.

In 1959, Wayman Elbridge Adams died in the city of Austin, Texas at 72 years of age.