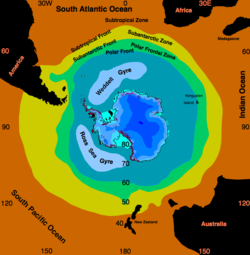 The Weddell Gyre is one of the two gyres that exist within the Southern Ocean. The gyre is located in the Weddell Sea, and rotates clockwise. The gyre is formed by interactions between the Antarctic Circumpolar Current and the Antarctic Continental Shelf. Due to the Coriolis force acting to the left in the Southern Hemisphere and the resulting Ekman transport away from the centres of the gyre, these regions are very productive due to upwelling of cold, nutrient rich water.