Weirton (pron. WEER-ton) is a city in Brooke and Hancock counties in the U.S. state of West Virginia. Located primarily in Hancock County, the city lies in the northern portions of the state's Northern Panhandle region. As of the 2010 census, the city's population was 19,746. It is a principal city within the Weirton-Steubenville, WV-OH Metropolitan Statistical Area.

The small village called Holliday's Cove — which is now most of downtown Weirton — was founded in 1793. (It eventually lost the apostrophe.) In 1909, Ernest T. Weir arrived from neighboring Pittsburgh and built a steel mill later known as Weirton Steel Corporation just north of Holliday's Cove.[5] An unincorporated settlement called Weirton grew up around the mill that, by 1940, was said to be the largest unincorporated city in the United States. By then Hollidays Cove and two other outlying areas, Weirton Heights and Marland Heights, which as their names suggest were on hilltops or ridges surrounding the "Weir–Cove" area, had also incorporated.

Hollidays Cove Fort was a Revolutionary War fortification constructed in 1774 by soldiers from Ft. Pitt. It was located in what is now downtown Weirton, along Harmons Creek (named for Harmon Greathouse), about three miles from its mouth on the Ohio River. It was commanded by Colonel Andrew Van Swearingen (1741–1793) and later by his son-in-law, Captain Samuel Brady (1756–1795), the famous leader of Brady's Rangers. In 1779, over 28 militia were garrisoned at Hollidays Cove. Two years earlier, Colonel Van Swearingen led a dozen soldiers by longboat down the Ohio to help rescue the inhabitants of Ft. Henry in Wheeling in a siege by the British and Indian tribes in 1777. That mission was memorialized in a WPA-era mural painted on the wall of the Cove Post Office by Charles S. Chapman (1879–1962). The mural features Col. John Bilderback, who later gained infamy as the leader of the massacre of the Moravian Indians in Gnadenhutten in 1782.[6] 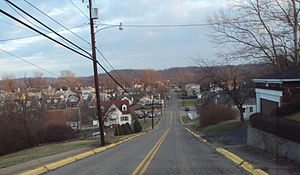 On July 1, 1947, all of these areas — Hollidays Cove, Marland Heights, Weirton Heights, and unincorporated Weirton — merged and formed the city of Weirton as it currently exists. Thomas E. Millsop, the head of the Weirton Steel division of the other Ernest T. Weir company, National Steel Corporation, was elected as the city's first mayor. The city charter was approved by voters in 1950.

Also home to Weirton is the Weirton Steel Corporation which was once a fully integrated steel mill employing over 12,000 people. It was the largest private employer and the largest taxpayer in West Virginia. This is no longer true. Due to reorganization of the steel industry, not only within the United States but worldwide, the Weirton plant, now part of the international giant Arcelor Mittal, currently operates only the tin-plating section of the mill (though still one of the country's largest tin-plate makers), with only 1,200 workers. During the early 1980s the employees of Weirton Steel endeavored to purchase the mill from National Steel Corporation as the largest ESOP (Employee Stock Ownership Program) in the nation, saving the mill from bankruptcy.[7]

Some civic leaders are attempting to attract businesses and homeowners from the neighboring Pittsburgh metropolitan area, marketing Weirton as a bedroom community, taking advantage of the close proximity to the Pittsburgh International Airport and major interstates.

The city of Weirton is located at Lua error in Module:Coordinates at line 668: callParserFunction: function "#coordinates" was not found. (40.41, −80.58).[9] It extends from the Ohio border on the west to the Pennsylvania border on the east at a point where the northern extension of West Virginia is five miles across. Therefore, it is the only city in the United States that borders two other states on two sides, and its own state on the other two sides.

Weirton is across the Ohio River from Steubenville, Ohio, and about 35 miles west of Pittsburgh, Pennsylvania, along U.S. Route 22. Pittsburgh International Airport is less than 30 miles away. With the opening of the Findlay Connector (PA Turnpike 576, future I-576) in October, 2006, the highway distance to the airport has decreased to about 20 miles.

By 2011, the city and its two counties had attracted the attention of the New York Times which noted the town was dwindling in population. The article reported that Brooke County had just 71 live births for every 100 deaths and that Hancock County was in similar straits. This has led, the article claimed, to a reduction in civic institutions.[13]

There were 8,839 households of which 24.8% had children under the age of 18 living with them, 44.8% were married couples living together, 13.0% had a female householder with no husband present, 4.5% had a male householder with no wife present, and 37.7% were non-families. 32.9% of all households were made up of individuals and 15.1% had someone living alone who was 65 years of age or older. The average household size was 2.22 and the average family size was 2.78.

There were 8,958 households out of which 23.8% had children under the age of 18 living with them, 51.4% were married couples living together, 10.6% had a female householder with no husband present, and 34.3% were non-families. 30.8% of all households were made up of individuals and 15.9% had someone living alone who was 65 years of age or older. The average household size was 2.25 and the average family size was 2.79.

The following people have been elected Mayor of Weirton since the city's incorporation in 1947: 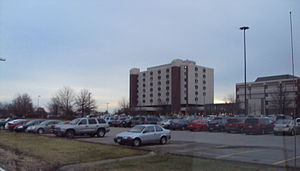 Historically, Weirton's economy, as well as that of the region, was dominated by the steel industry, with the biggest employer being ArcelorMittal Steel.

Over the years as the steel industry declined, the local economy has become more diversified, with retail services and medical services recording the largest increases.

Weirton Medical Center is a large 238 bed hospital that services patients from all over the region, and is one of the city's largest employers today employing over 1,000 people.

Due to the area's close proximity to Pittsburgh, Pennsylvania, there is also a growing number of workers who work in Pittsburgh and commute from Weirton.

Weirton was the subject of a photo essay, "Weir's Weirton," in the Life issue of September 13, 1937. The issue's front cover featured a portrait of Ernest Tener Weir.

Weirton has attracted the attention of Hollywood filmmakers and writers on several occasions: