West New York was incorporated as a town by an act of the New Jersey Legislature on July 8, 1898, replacing Union Township, based on the results of a referendum held three days earlier.[19][20] West New York underwent a massive growth at the beginning of the 20th century, driven by development of textile industries that made North Hudson the "Embroidery Capital of the United States".[21]

The town was populated mainly with Italian Americans and German Americans.[22][23] The 1960s saw an influx of Cuban émigrés to the area,[24] once called Havana on the Hudson; it has since has become one of the United States cities with a majority Hispanic population. Simultaneously, high-rise apartments, some of the tallest buildings in North Hudson, were built along Boulevard East,[25][26] adding to the population of the town, giving it one of highest population densities in the country. Since the 1980s the Hudson waterfront, which had been part of the Weehawken Terminal has been redeveloped from industrial to residential and recreational uses, including the Hudson River Waterfront Walkway. 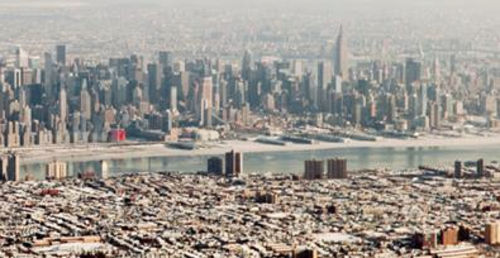 West New York is one of North Hudson's communities atop The Palisades above the Hudson River, and home to the highest point in the county.[27] Its Hudson Waterfront has been known as Bulls Ferry since before the American Revolutionary War. Bergenline Avenue is its main commercial thoroughfare, while the wide two-way 60th Street is a major cross-town thoroughfare, and site of Town Hall. More than half of U.S. Presidents have streets bearing their name in the town.[28]

Bergenline Avenue is the main shopping district of North Hudson. West New York's Urban Enterprise Zone, one of seven established by legislation in 1996, covers portions of Bergenline Avenue from 49th to 67th Streets. In addition to other benefits to encourage employment within the Zone, shoppers can take advantage of a reduced 3½% sales tax rate (versus the 7% rate charged statewide) at eligible merchants.[39][40]

Until the 1880s, the primary commercial area of West New York was Palisade Avenue. An influential citizen named Henry Kohlmeier who lived there objected to the noise created by horse-drawn public coaches, which led to the route being transferred one block west to what is now Bergenline Avenue (formerly Lewis Street), which runs parallel to Palisade Avenue, and which remains the city's main commercial thoroughfare. Currently the longest commercial avenue in the state, boasting over 300 retail stores and restaurants, Bergenline runs through not only the entire length of West New York from north to south, but also through Union City, Guttenberg and North Bergen, making it the main commercial strip for North Hudson. Also known as the "Miracle Mile", Bergenline's largest concentration of retail and chain stores begins at the intersection of 32nd Street in Union City, and continues north until 92nd Street in North Bergen.[41] Bergenline Avenue is also used as the route for local parades, such as the annual Memorial Day Parade[42] Cuban Day Parade[43] and Dominican-American Parade.[44] 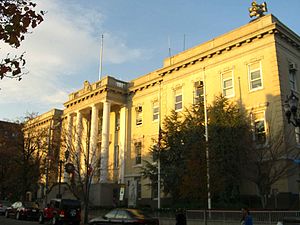 Since 1931, West New York has been governed under the Walsh Act form of New Jersey municipal government by a five-member commission. Commission members are elected at-large in nonpartisan elections to serve four-year terms of office on a concurrent basis. Each Commissioner is assigned to head one of five departments. The Commission selects one of its members to serve as Mayor.[5]

In the May 2011 municipal election, the "Together We Can" slate of five candidates led by Roque took all five seats on the Town Council, knocking off the slate of incumbents led by then-mayor Silverio Vega.[57] At the town council's reorganization meeting, the five commissioners unanimously voted to appoint Roque to a four-year term as Mayor of West New York.[58]

In February 2015, Cosmo Cirillo was selected to fill the vacant seat of Rubin Vargas, making Cirillo the youngest commissioner on town history at the age of 27.[59] 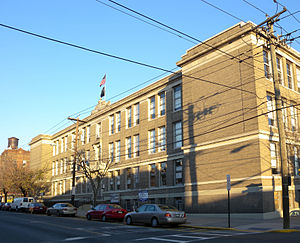 West New York is served by West New York School District for pre-Kindergarten through twelfth grade. The district is one of 31 former Abbott districts statewide,[82] which are now referred to as "SDA Districts" based on the requirement for the state to cover all costs for school building and renovation projects in these districts under the supervision of the New Jersey Schools Development Authority.[83][84]

Private schools in West New York include St. Joseph of the Palisades Grammar School, which is overseen by the Roman Catholic Archdiocese of Newark.[97]

West New York does not have its own fire department, but is one of five municipalities served by the North Hudson Regional Fire and Rescue.[99]

The West New York Emergency Medical Squad consists of 26 people (as of May 2011) who are based at the EMS house on 62nd Street, which houses four trucks, to which each is assigned two workers. The Squad's second, larger facility, at 66th Street, opened May 11, 2011.[100]

West New York's Emergency Medical Services was among the many Hudson County agencies that responded to the January 2009 crash of US Airways Flight 1549, for which they received accolades from the survivors.[101][102] 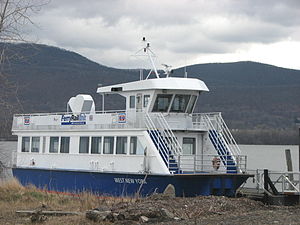 This New York Waterway ferry named West New York is not used on the routes which serve the town.

The Bergenline Avenue station[105] of Hudson-Bergen Light Rail is located at the city line with Union City, while the Weehawken Port Imperial is located on the Weehawken waterfront at the foot of Pershing Road near the NY Waterway ferry terminal. Regular ferry crossings of the Hudson River run daily.[106]

West New York is located within the New York media market, with most of its daily papers available for sale or delivery. The Jersey Journal is a local daily paper based in Jersey City. Local weeklies include the free bilingual paper, Hudson Dispatch Weekly,[107] a former daily,[108] The West New York Reporter, which is part of the Hudson Reporter group of local weeklies, and the Spanish language El Especialito.[109] River View Observer is a monthly newspaper that covers the Hudson County waterfront market.

In the late 2000s, West New York, Weehawken, Union City and North Bergen came to be dubbed collectively as "NoHu", a North Hudson haven for local performing and fine artists, many of whom are immigrants from Latin America and other countries, in part due to lower housing costs compared to those in nearby art havens such as Hoboken, Jersey City and Manhattan.[110]

People who were born in, residents of, or otherwise closely associated with West New York include: