The West Vancouver Memorial Library (WVML) is a public library that serves the District of West Vancouver, British Columbia, Canada.

It was founded in 1950 as a memorial to honour those who gave their lives during the Second World War so future generations would have the freedom to pursue knowledge without let or hindrance.[1] The Library has a circulation rate of 21.32 per capita, the highest circulation rate per capita in Canada.[2]

Although West Vancouver Memorial Library did not officially open its doors until November 11, 1950, the District of West Vancouver was peppered with small circulating libraries throughout the first half of the twentieth century. As early as 1919, Mrs. Effie M. Field was loaning books from her dry goods and children's clothing store at 14th St. and Bellevue Ave.; however, in 1921, the Hollyburn Public Library Association took over Mrs. Field's modest collection of books, with the intention of turning it into a municipally funded public library. By 1926, the library's collection grew to over 1000 books, and after moving into George Gimmill's modern drug store at 1402 Marine Dr., the library was able to expand even further.[3] 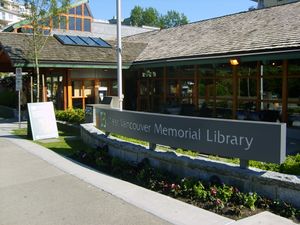 Harsh economic times during the 1930s led to sharp reductions in provincial funding, and in 1933, the library was officially closed. West Vancouver residents were deeply affected by the Great Depression, although throughout the latter half of the decade, there was a proliferation of small private lending libraries in a number of stationery and gift shops.

With the onset of the Second World War, the economy of West Vancouver was centred on the War effort, along with the rest of Canada, but by the summer of 1944, a petition requesting the establishment of a municipal public library was presented to West Vancouver City Council. On December 16, the by-law was approved, and shortly after the end of the War, the municipality voted that a library be constructed as a War Memorial.

Designed by West Vancouver architect R. A. D. Berwick, the library was opened on November 11, 1950 with Elizabeth Musto as the library's first official librarian. Shortly thereafter, a stained glass window was generously donated to the library, featuring a reproduction of a painting by Sir Frank Bernard Dicksee entitled "Harmony," created by Master craftsman John Henry Dearle. West Vancouver Memorial Library was only narrowly voted in as the municipality's official War Memorial—a close second (by only one vote) was a Civic Center. Other possibilities included a hospital, a swimming pool, a chapel, a town clock, and a community gymnasium. The library is situated in the 1900 block of Marine Dr., and since it was officially opened in the year 1950, it was given the street number 1950 by the municipality. Oddly enough, the library's construction totalled $19,500.

Since the end of the War, West Vancouver's population had risen steadily, and after just five years of being open, the library was circulating an impressive 12.76 books per capita.[3] In 1957, Weekend Magazine published a photostory about West Vancouver Memorial Library entitled "North America's Busiest Library," and in 1960, The Vancouver Sun also proclaimed that the library was the "Most Busy Library in Canada." Not surprisingly, then, the library has experienced a constant need for expansion, and with a series of renovation projects, the library itself has grown to meet the needs of its flourishing community. The library has continually maintained a high rate of circulation, and at present has the second highest circulation per capita in BC.[4]

West Vancouver Memorial Library has a number of Events and Programs for patrons of all ages.

Children are welcome to attend Babytime, Tales for Twos, Storytime Fun (3Y-5Y), as well as Family Storytime—all of which feature a variety of stories, songs, action rhymes, and more.

Teens aged 12–15 are welcome to join the library's Teen Advisory Group (TAG). One general meeting is held every month, as well as one event, project or workshop per month. Past events/projects that the TAG has been involved with include:

Teens are also welcome to participate in the library's Book Buddies program, which involves helping and encouraging children with their reading skills.

Adults are welcome to attend any number of the library's many programs including computer training seminars, database training, author readings, book clubs, slide shows, film viewings, book launches, along with a number of special events that might include a Wine Appreciation Evening, or a Photography Exhibition.

A cabin at 15th St. and Ottawa Ave. in 1942. From the William Mcphee collection

The library has a number of multilingual materials including those in Chinese, Tagalog, Japanese, Spanish, Korean, French, and Persian. With more than 2,500 books, West Vancouver Memorial Library has the largest and most comprehensive Persian collection in British Columbia.

Through a generous bequest from Robert Leslie Welsh, the West Vancouver Memorial Library has been able to offer a number of music-related programs, materials, and technologies for the general public.

Now in its fourth year, the Library's Friday Night Concert Series features a wide spectrum of live music. With six concerts each season - September, October, November, January, February & June, there is a wide range of performances including Argentine tango, Cuban jazz, opera and fado. Concerts are free and open to all.

The library also offers Kodaly Orff Music for Children, a 6 week sampler for preschoolers, offered three times a year. Children experience the joy of making music through song, games, dance and instruments. A great introduction to the Kodaly Method, which also develops skills children will carry with them to further music lessons.

An extensive collection of CDs is also available at the library, along with classical and popular music performances on DVD, and an expanding collection of music books and scores. Patrons can listen to CDs in the Music Listening Room.

Friends of the Library

The Friends of the Library also provides hospitality for the Library's official and social events like the monthly Artist receptions, Author events, and Concert Series. They sponsor the annual North Shore Writers' Festival, the Summer Reading program, and they also help out when the Library Foundation holds its annual croquet benefit.

The West Vancouver Memorial Library Foundation is a nonprofit organization that was established in 1986 to receive, administer and distribute gifts made to enhance Library services beyond the scope of normal funding. These additional services and facilities have helped to make the Library a more interesting, helpful and user-friendly place.

The Foundation recognizes that the strength of the library stems from well-trained staff, ample high-quality materials, the latest technology and well-equipped buildings. A strong library system enriches the community by expanding minds and enriching lives; the efforts of the Foundation seek to support this goal.

The Foundation's current initiatives include:

The West Vancouver Memorial Library Foundation is very grateful for the support it has received from past donors. Future donations can be made to the Foundation in person or online.