West Virginia's 1st congressional district is located in the northern part of the state. It is the most regularly drawn of the state's three districts.

It includes the industrial Rust Belt area of the state's northern panhandle which includes the district's third largest city, Wheeling, as well as Fairmont, Clarksburg, and the college town of Morgantown, the home of the main campus of West Virginia University. The largest city in the district is Parkersburg; the second largest is Morgantown. It also includes many rural farm and timber producing areas. The district has almost no population change reported in the 2010 Census change relative to the other 2 districts, as growth around Morgantown and Parkersburg offset population loss elsewhere, and the district was carried over unchanged for the next ten-year cycle.

Despite the lack of turnover in the congressional seat, the 1st is not considered safe for either party. The cities are Democratic strongholds, while the rural areas are much more conservative and have a tendency to swing Republican more often. State legislators are roughly equally split between both parties. 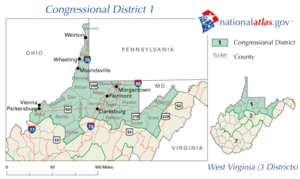