West Virginia Route 2 is a state highway in the US state of West Virginia. It generally parallels the Ohio River along the western border of the state, from U.S. Route 60 in Huntington (just west of the East End Bridge) northeasterly to U.S. Route 30 in Chester (just south of the Jennings Randolph Memorial Bridge).

WV 2 is a variable two-lane and four-lane highway from its northern terminus at Chester to Wheeling.

File:WV2hbhd.jpg
A stretch of WV 2 located in northeastern Cabell County

For a time, Route 2 deviated from its current alignment to follow a more northeasterly route from New Cumberland to US 30 via the unincorporated area of New Manchester. The current alignment of WV 2 passing the Mountaineer Race Track and Gaming Resort to US 30 was formerly numbered WV 66 and is reflected as such in many of the county highways in the area. The former routing of WV 2 is now WV 8.

On June 23, 2000, work began on a project that widened WV 2 from two to four lanes from Weirton at US 22 (Robert C. Byrd Expressway) south to CR 8 near Follansbee. The project length was just 0.9 miles. Work was supposed to be complete by June 31, 2001, however, construction wrapped up on October 31 at a cost of $21,444,875.[2] The project entailed stabilizing the hillside by reshaping the highwall, widening the roadway with four 12-foot (3.7 m) lanes, creating 10-foot (3.0 m) outside shoulders, and 8-foot (2.4 m) interior shoulders. 3.9 million cubic yards of earth were removed during the excavation process. 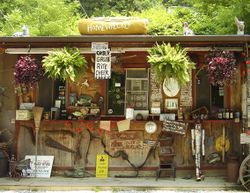 Within the six-year plan produced by the West Virginia Department of Transportation is a four-lane upgrade for WV 2 between McKeefrey and Parkersburg. Ranked 55th, this project has an estimated price tag of $432,000,000.[4]

WV 2 was reconstructed from Lesage to Glenwood as an improved two-lane highway with shoulders on a four-lane right-of-way in the mid-1980s. Currently, there are long-range plans to widen WV 2 from WV 193 near Barboursville northeast to Point Pleasant to four lanes at a cost of $237,300,000.[4] Even further down the road is WV 2 widening from Point Pleasant to Interstate 77 at a cost of $207,300,000. The projects are ranked 86th and 98th,respectively.