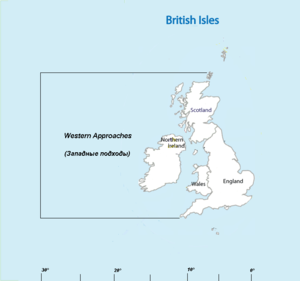 The Western Approaches is an approximately rectangular area of the Atlantic ocean lying immediately to the west of the British Isles.[citation needed] The north and south boundaries are defined by the corresponding extremities of the British Isles. The coast of the mainland forms the eastern side and the western boundary is the 30 degree meridian, which passes through Iceland. The area is particularly important to the United Kingdom, because many of its larger shipping ports lie within it.

The term is most commonly used when discussing naval warfare, notably during the First World War and Battle of the Atlantic during the Second World War in which Nazi Germany's Kriegsmarine attempted to blockade the United Kingdom using submarines (U-boats) operating in this area. Since almost all shipping to and from the United Kingdom passed through this area, it was an excellent hunting ground and had to be heavily defended.

Upon moving from Liverpool, the 'Liverpool & Glasgow Salvage Co.' became headquartered in Port Bannatyne on the Isle of Bute (situated in the Clyde Estuary) and was responsible for all marine casualties in Western Approaches. Its ocean-going tugs brought back countless torpedoed vessels including the Greek ship 'Leonidas del Varmis', the Dutch ship 'Volendam' (carrying 325 children all of whom survived, with only one crew casualty), the 'Coronda' (more than 20 bodies or part-bodies buried in North Bute), the 'San Demetrio' (of war-movie fame), and the 'Imperial Transport' (only half of which, miraculously, was brought into Kilchattan Bay). More details including photographs can be found here: Bute at War