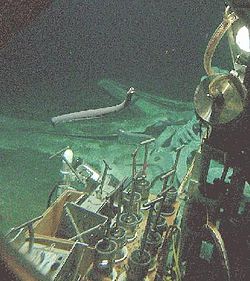 The skeleton of a gray whale lies on the Santa Cruz Basin seafloor as a hagfish swims into view of the US Navy's deep-sea submersible ALVIN.[1]

A whale fall is the carcass of a cetacean that has fallen into the Bathyal or Abyssal zone on the ocean floor.[2] As they are found at depths of 2,000 m or 6,600 ft, they create complex localized ecosystems that supply sustenance to deep-sea organisms for decades.[3] This is unlike in shallower waters, where a whale carcass will be consumed by scavengers over a relatively short period of time. It was with the development of deep-sea robotic exploration that whale falls were first observed in the late 1970s.[4] 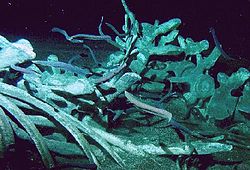 Skeleton of a 35-ton, 13-m gray whale that has been on the seafloor of the Santa Cruz Basin (around 1700 m deep) for 18 months. Animals visible include swimming, eel-like hagfish, and thousands of amphipods and newly settled, juvenile clams.[1] 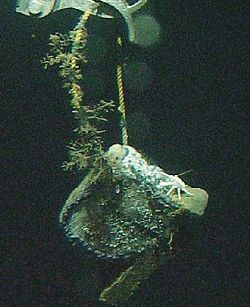 A whale bone being recovered from the Santa Catalina Basin floor five years after experimental emplacement. The bone surface contains patches of white bacterial mats and a squat lobster. Hydroids have sprouted on the loop of yellow line attached to the bone.[1]

The earliest indication that whale carcasses could host specialized animal communities occurred in 1854 when a new mussel species was extracted from a piece of floating whale blubber. By the 1960s, deep sea trawlers unintentionally recovered other new mollusc species including limpets (named Osteopelta) attached to whale bones.[5]

The first recorded abyssal whale fall was discovered by Navy bathyscaph pilots Lt Ken Hanson, ETCM(SS) George Ellis and LT Tom Vetter diving in bathyscaph Trieste II (DSV-1) on 19 February 1977 (at Lua error in Module:Coordinates at line 668: callParserFunction: function "#coordinates" was not found.). The skeleton of the carcass, which was completely devoid of organic tissue, remained intact and collapsed flat on the seafloor. The submersible recovered a jawbone and phalanges. The whale was considered to be a gray whale based on the size of the bones and the skeleton, the lack of teeth and its location west of Santa Catalina.[6]

Another whale fall was discovered accidentally by a team of marine biologists led by University of Hawaii oceanographer Craig Smith in 1987. The DSV Alvin identified the remains using scanning sonar at 1,240 m (4,070 ft) in the Catalina Basin.[5]

Other whale falls have since been found by more researchers and deep-sea explorers as well as naval submarines. The increase in detection is largely due to the use of cutting-edge side-scan sonar which can minutely examine the ocean floor for large aggregations of matter.

A consistent group of organisms inhabits whale falls in all oceans. The mussels and vesicomyid clams from Alvin's discovery belonged to groups that harbor chemosynthetic bacteria which can draw energy from inorganic chemicals. Their only known habitats were sunken wood and hydrothermal vents. The lucinid clams' only other habitats were seeps and anoxic seafloor sediments. Similarly, a snail inhabited only anoxic sediments.[5]

Scientists have concluded from the data recorded from Santa Catalina, as well as other cases off the California coast, that there are at least three stages of decomposition associated with a whale fall.[5]

The initial period begins with "mobile scavengers" such as hagfish and sleeper sharks actively consuming soft tissue from the carcass. Consumption can be at a rate of 40–60 kilograms (88–132 lb) per day over a two-year period.[5]

The second stage introduces the "enrichment opportunists". These are animals which colonize the bones and surrounding sediments that have been contaminated with organic matter from the carcass and any other tissue left by the scavengers. This process can take up to two years.[5]

Finally "sulfophilic bacteria" anaerobically break down the lipids embedded in the bones. Instead of oxygen, they reduce dissolved sulfate SO2−
4 and excrete hydrogen sulfide. Due to the toxicity of H
2S, only resistant chemosynthetic bacteria survive. The bacterial mats provide nourishment for mussels, clams, limpets and sea snails. As whale bones are rich in lipids, representing 4–6% of its body weight, the final digestion stage can last between 50 and possibly 100 years.[5]

The differences in stage patterns between whale falls is likely to be related to carcass size. Large, intact whale falls appear to pass through the three decomposition stages, while the stages on smaller or partial carcasses may be truncated. Researchers believe the presence of 1 cm (0.39 in) Osedax (Latin: bone-devourer) may be a contributing factor in the successional differences. Also known as zombie worms—so called because they have no eyes or mouth—they were first discovered in the deep Submarine Monterey Canyon in southern California in 2002.[7] Other examples have since been discovered off Sweden, Japan, and Antarctica. Osedax larvae have no digestive tract; instead they float through the oceans until they encounter a carcass. The worms then grow appendages resembling tiny trees that absorb oxygen. A root-like structure grows into the bone; these contain symbiotic bacteria which make an acid that breaks down proteins within the bone. The process supplies nutrients for the worms. When these worms sexually mature, eggs are released to start the cycle over.[5][8]

In 1989, scientists hypothesized that some species (such as Osedax) might use whale falls as stepping-stones to extend their range across multiple chemosynthetic communities. They estimate that 690,000 carcasses/skeletons of the nine largest whale species are in one of the three stages at any one time. This estimate implies an average spacing of 12 km (7.5 mi) and as little as 5 km (3.1 mi) along migration routes. They hypothesize that this distance is short enough to allow larvae to disperse/migrate from one to another.[5]

Whale fall fossils from the late Eocene and Oligocene (34-23 MYA) in Washington and from the Pliocene in Italy include clams that also inhabited non-chemosynthetic environments. Chemosynthetic-only animals do not appear until the Miocene (23 to 5 MYA) in California and Japan. This may be because the lipid content of early whale bones was too low.[5]

The discovery of the limpet Osteopelta in an Eocene New Zealand turtle bone indicates that these animals evolved before whales, including possibly inhabiting Mesozoic (251-66 MYA) reptiles.[9] They may have survived in seeps, wood-falls and vents while waiting out the 20 million year gap between the reptiles' extinction and whales' emergence. Another possibility is that these fossils represent a prior, dead-end evolutionary path, and that today's whale fall animals evolved independently.[5]