From Infogalactic: the planetary knowledge core
Jump to: navigation, search
This article is about a religious concept. For other uses, see Wheel of time (disambiguation).

The Wheel of time or wheel of history (Kalachakra) is a concept found in several religious traditions and philosophies, notably religions of Indian origin such as Hinduism and Buddhism, which regard time as cyclical and consisting of repeating ages. Many other cultures contain belief in a similar concept: notably, the Q'ero Indians in Peru, as well as the Hopi Indians of Arizona.

The Wheel of Time or Kalachakra is a Tantric deity that is associated with Tibetan Tantric Buddhism, which encompasses all four main schools of Sakya, Nyingma, Kagyu and Gelug, and is especially important within the lesser-known Jonang tradition.

The Kalachakra tantra prophesies a world within which (religious) conflict is prevalent. A worldwide war will be waged which will see the expansion of the mystical Kingdom of Shambhala led by a messianic king.

The philosopher Marcus Aurelius saw time as extending forwards to infinity and backwards to infinity, while admitting the possibility (without arguing the case) that "the administration of the universe is organized into a succession of finite periods".[1]

In an interview included with the audiobook editions of his novels, author Robert Jordan has stated that his bestselling fantasy series The Wheel of Time borrows the titular concept from Hindu mythology.[citation needed]

Several episodes of the American TV series Lost feature a wheel which can be physically turned in order to manipulate space and time. In a series of episodes during the fifth season, the island on which the show takes place begins to skip violently back and forth through time after the wheel is pulled off its axis. 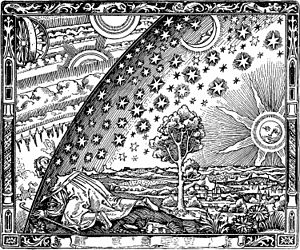