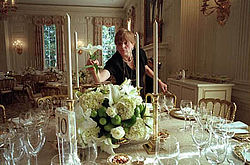 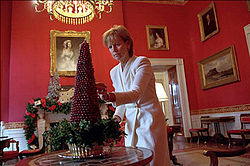 Assistant White House Floral Designer Wendy Elsasser adds final touches to a holiday cranberry topiary in the Red Room of the White House. The cranberry topiary is now a 20 year plus tradition and is placed on the room's guéridon designed by cabinetmaker Charles-Honoré Lannuier c. 1810.
File:Westwingconservatoriesc1900.jpg
Conservatories covered the West Colonnade and site of the current West Wing in the 19th century.

The White House Chief Floral Designer is responsible for the planning, design, arrangement and placement of all floral decorations for the First Family, their private entertaining, and official state functions at the White House, the official residence and principal workplace of the President of the United States. The current Chief Floral Designer is Hedieh Ghaffarian.[1]

The 1902 renovations of the White House removed the greenhouses, and constructed the West Wing and East Wing. Flowers were brought from nearby government greenhouses. With the advent of plane transportation, flowers began to arrive from distant destinations: Florida, Colorado for First Lady Mamie Eisenhower's favored pink carnations, and southern California.

Until the administration of John F. Kennedy, floral arrangements at the White House had been extremely formal in style. Guided by advice from her horticulturalist friend Rachel Lambert Mellon, First Lady Jacqueline Kennedy began to use looser and more relaxed arrangements, many based upon 16th-century Flemish floral and fruit still lifes. China dishes from previous administrations were used as vases, including two 18th-century dessert coolers used by the Madisons. The White House collection of vermeil tableware, previously only on display in the Vermeil Room, was also utilised for arrangements. The position of Chief Floral Designer was established, and Rusty Young was the first to occupy the position, continuing to work into the Johnson and Nixon administrations.

In addition to the ongoing production of fresh-cut floral displays for the White House, the Chief Floral Designer oversees the annual holiday decoration of the house.