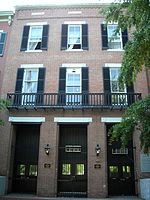 The White House Conference Center is an annex building of the White House in Washington, D.C. The Colonial Revival building is located across Pennsylvania Avenue at 726 Jackson Place and was used as a temporary press location during remodeling of the James S. Brady Press Briefing Room from August 2006 to June 2007.[1][2]