Einthoven was born in Semarang on Java in the Dutch East Indies (now Indonesia). His father, a doctor, died when Einthoven was a child. His mother returned to the Netherlands with her children in 1870 and settled in Utrecht. His parents ancestry was Dutch, his mother's ancestry was Dutch and Swiss[2][3] In 1885, Einthoven received a medical degree from the University of Utrecht. He became a professor at the University of Leiden in 1886.

In 1902 he became member of the Royal Netherlands Academy of Arts and Sciences.[4]

He died in Leiden in the Netherlands and is buried in the graveyard of the Reformed Church at 6 Haarlemmerstraatweg in Oegstgeest.[5]

Before Einthoven's time, it was known that the beating of the heart produced electrical currents, but the instruments of the time could not accurately measure this phenomenon without placing electrodes directly on the heart. Beginning in 1901, Einthoven completed a series of prototypes of a string galvanometer. This device used a very thin filament of conductive wire passing between very strong magnets. When a current passed through the filament, the magnetic field created by the current would cause the string to move. A light shining on the string would cast a shadow on a moving roll of photographic paper, thus forming a continuous curve showing the movement of the string. The original machine required water cooling for the powerful electromagnets, required 5 people to operate it and weighed some 270 kilograms. This device increased the sensitivity of the standard galvanometer so that the electrical activity of the heart could be measured despite the insulation of flesh and bones. 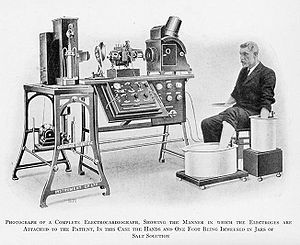 Although later technological advances brought about better and more portable EKG devices, much of the terminology used in describing an EKG originated with Einthoven. His assignment of the letters P, Q, R, S and T to the various deflections is still used. The term Einthoven's triangle is named for him. It refers to the imaginary inverted equilateral triangle centered on the chest and the points being the standard leads on the arms and leg.

After his development of the string galvanometer, Einthoven went on to describe the electrocardiographic features of a number of cardiovascular disorders. Later in life, Einthoven turned his attention to the study of acoustics, particularly heart sounds which he researched with Dr. P. Battaerd.

In 1924, Einthoven was awarded the Nobel Prize in Medicine for inventing the first practical system of electrocardiography used in medical diagnosis.[6]