From Infogalactic: the planetary knowledge core
Jump to: navigation, search
This article is about the 19th century Georgia politician. For the 18th century U.S. military officer, see William Crawford (soldier). 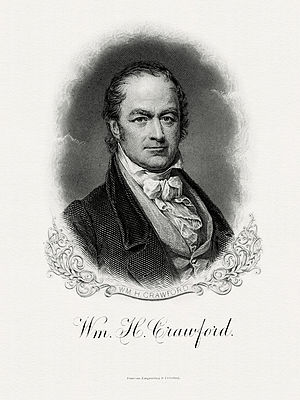 Bureau of Engraving and Printing portrait of Crawford as Secretary of the Treasury.

Crawford was born on February 24, 1772 in the portion of Amherst County, Virginia that later became Nelson County. The son of Joel Crawford and Fanny Harris. He moved with his family to Edgefield County, South Carolina in 1779, and to Columbia County, Georgia in 1783. Crawford was educated at private schools in Georgia and at Richmond Academy in Augusta. After his father's death, Crawford became the family's main financial provider, and he worked on the Crawford family farm and taught school. He later studied law, was admitted to the bar in 1799, and began to practice in Lexington. Also in 1799, Crawford was appointed by the state legislature to prepare a digest of Georgia's statutes.

In 1803, Crawford was elected to the Georgia House of Representatives as a member of the Democratic-Republican Party, and he served until 1807. He allied himself with senator James Jackson. Their enemies were the Clarkites, led by John Clark. In 1802, he shot and killed Peter Lawrence Van Alen, a Clark ally, in a duel. Four years later on December 16, 1806, Crawford faced Clark himself in a duel, resulting in Crawford's left wrist being shattered by a shot from Clark, but he eventually recovered.[1] In 1807, Crawford joined the 10th United States Congress mid-term as the junior U.S. Senator from Georgia when the Georgia legislature elected him to replace George Jones, an appointee who had held the office for a few months after the death of Abraham Baldwin.

In 1811, Crawford declined to serve as Secretary of War in the Madison administration.

In 1813, President James Madison appointed Crawford as the U.S. minister to France during the waning years of the First French Empire; Crawford held that ministerial post until 1815, shortly after the end of the War of 1812.

Upon Crawford's return, Madison appointed him as Secretary of War. After slightly more than a year of satisfactory service in that post (and after disclaiming interest in the 1816 Democratic-Republican nomination for President), Crawford moved within the Cabinet to become Secretary of the Treasury. He remained in that position through the rest of Madison's term and Monroe's entire administration, which ended in 1825.

Crawford was again a leading candidate for the Democratic-Republican presidential nomination in 1824. However, Crawford was put out of the running because of a paralytic stroke he suffered in 1823 that was brought on by a prescription given to him by his physician.[2] The Democratic-Republican Party split around this time and one of the splinter groups nominated Crawford.

Despite Crawford's improved health (and the support of former presidents Madison and Jefferson), he finished third in the electoral vote, behind New Orleans war hero Andrew Jackson and Secretary of State John Quincy Adams. He thus was still in the nominal running when the Presidential election ended up in the House of Representatives, due to the provision within the Twelfth Amendment giving a line on the House ballot to each of the top three candidates, but his stroke made him a non-factor there.

Refusing Adams's request that he remain at the Treasury, Crawford then returned to Georgia, where he was appointed as a state superior court judge. Crawford remained an active judge until his death a decade later.

Crawford was nominated for vice president by the Georgia legislature in 1828 but later withdrew after support from other states was not forthcoming. Crawford also considered running for vice president in 1832 but decided against it in favor of Martin Van Buren. Crawford also considered running for president again in 1832 but dropped the idea when Andrew Jackson decided to seek a second term.

During the 1820s, Crawford was a member of the prestigious society Columbian Institute for the Promotion of Arts and Sciences, who counted among their members former presidents Andrew Jackson and John Quincy Adams and many prominent men of the day, including well-known representatives of the military, government service, medical and other professions.[3] Crawford also served as a Vice President in the American Colonization Society from its formation in 1817 until his death.

Crawford is buried at the site of his home, about one-half mile west of the current Crawford city limit. 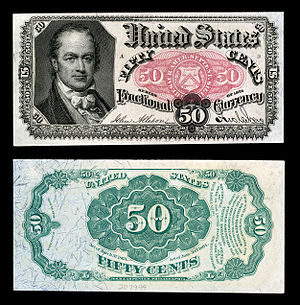 The following are named in honor of William H. Crawford.[4]