Woodbridge is a town in New Haven County, Connecticut, United States. The population was 8,990 at the 2010 census.[1] It is one of the wealthiest towns in Connecticut, ranking 8th in the state per the 2010 US Census in terms of per capita income, and is home to many of the faculty of Yale University. The town center is listed on the National Register of Historic Places as Woodbridge Green Historic District.

Woodbridge was originally called "Amity", having been carved out of land originally belonging to New Haven and Milford as an independent parish in 1739. In 1742, the Rev. Benjamin Woodbridge was ordained in Amity, and it is after him that the modern town was named.

In 1661, the town was the location of one of the hideouts of the "Regicides" — three of the judges who signed the death warrant for King Charles I of England. The ruins of their hideout can be found on the nearby West Rock ridge, which runs along the town's eastern border.

Thomas Darling (1720–1789), a tutor at Yale College and later an entrepreneur in New Haven, moved to town in 1774. His home is now the Darling House Museum, operated by the Amity & Woodbridge Historical Association.[2] The original farms of Woodbridge were located in the area of the West River Valley known as "The Flats".

In the modern era, Woodbridge has undergone significant suburbanization.

Woodbridge is governed by a 6-member Board of Selectmen.

In April 2006, Edward Maum Sheehy (Democrat) became First Selectman. Sheehy served on the Board of Selectmen for 27 years as a regular selectman. The Board of Selectmen elected Sheehy First Selectman by a 3 to 2 vote, along party lines, to replace Amey Marella (Republican), who stepped down to accept a job as Deputy Commissioner of the Connecticut Department of Environmental Protection. Before becoming First Selectwoman in 2001, Marella was an attorney with the United States Environmental Protection Agency. Edward Sheehy was reelected in May 2009 to another two year term.

Beecher Road School is the town's pre Kindergarten - Grade 6 school. It is run by a principal, Gina Prisco, and assistant principal Lisa Sherman.[4]

As part of the Amity school system, Woodbridge shares a middle school with the town of Bethany, which is located north of Woodbridge.

Woodbridge also shares the Amity Regional High School with the neighboring towns of Bethany and Orange. The high school is located in Woodbridge's town center area. It has recently undergone extensive renovations in order to accommodate the extra ninth grade coming in from all three towns.

Woodbridge is informally divided into two distinct parts—central Woodbridge, which occupies the western hilly side of town, and the area known as The Flats, which occupies the eastern slice of town bordering the less wealthy West Rock and the New Haven neighborhood of Westville.

Neighboring towns are Bethany to the north, Hamden to the east, New Haven to the southeast, Orange to the south, and Derby, Ansonia, and Seymour to the west. 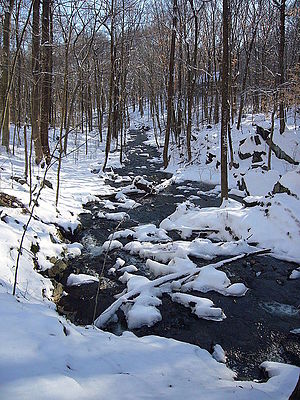 Below Wepawaug Falls in Woodbridge

Woodbridge is home to several organizations that protect undeveloped land and historic sites, including the Woodbridge Land Trust and the Woodbridge Park Association.[6] The town has an extensive system of preserved hiking trails open to the public, notably the 93-acre (380,000 m2) Alice Newton Street Memorial Park and the 22-acre (89,000 m2) Wepawaug Falls area. Some of the land has been donated by residents.[7]

There were 3,103 households out of which 40.3% had children under the age of 18 living with them, 73.7% were married couples living together, 6.5% had a female householder with no husband present, and 17.7% were non-families. 15.3% of all households were made up of individuals and 9.8% had someone living alone who was 65 years of age or older. The average household size was 2.84 and the average family size was 3.17.

On the National Register of Historic Places