The World Club Challenge is an annually held competition between the winners of the Australian NRL and the European Super League. The first such match was played in 1976 but did not become a regular fixture until the late 1980s. It was also punctuated in the 1990s by the Super League war but has been held every year since 2000. The North Queensland Cowboys are the current champions, having defeated the Leeds Rhinos 38–4 in 2016.

The competition began so unofficially in 1976 as a match between Sydney's Eastern Suburbs and Premiership winners St Helens. In 1987, another unofficial match took place when Wigan chairman Maurice Lindsay invited Manly-Warringah to Central Park.[1]

The first official World Club Challenge was between Widnes and Canberra in 1989. Three further matches, each involving Wigan, were staged in the early 1990s with the 1994 match being staged in Australia. This would be the last time for 20 years that this would happen.

If only we could see a genuine contest between Wigan and Brisbane – a World Club final. Alas, it will never happen. Oh sure, a game might be arranged, but logistics dictate that one side would be out of season, rusty or tired, and away from home.

After the 1994 match logistical issues meant the concept was put on hiatus until it was revived in 1997. With the outbreak of Australia's Super League War in 1995, the World Club Challenge was not staged again until 1997 when the competition was restructured to include twenty-two clubs from the Australian and European Super Leagues. With six rounds in two hemispheres and $1,000,000 prize money, the competition was prohibitively expensive to stage and reportedly lost over $5,000,000. This, coupled with the poor ratings and attendances both in Australia and Europe, led to the competition being postponed for two seasons. 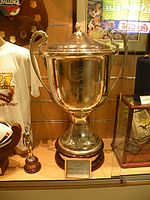 Returning to a one-off match between the League champions in 1998, a World Club Challenge as a show-piece fixture at Ellis Park in Johannesburg was mooted.[3] However this didn't eventuate.

When it was resurrected in 2000, the World Club Challenge was once more played between the winners of the premierships in Australasia and Europe. During this period it was contested annually in the United Kingdom in late January or early February, before the commencement National Rugby League season and the Super League season. Over this period Super League teams dominated the tournament winning 7 of 9 matches, and this led one Australian commentator to deride the competition, citing the British refusal to play the game outside of the UK, the effects of jet lag on an Australian team who arrived in England only a couple of days before the game, and wintry conditions as reasons for Australian team's poor performance. In addition, the games were being played at the beginning of the new season instead of at the end of the previous season, so the rosters of both sides had normally changed considerably, therefore the teams that took the field were not the ones that won the respective premierships. For these reasons, it was viewed as merely a pre-season warm up game by most Australasian teams and fans.[4][5]

Since the 2009 tournament, its popularity has increased with stronger crowds and also with Australian teams taking the concept more seriously, Australian teams were arriving earlier to acclimatize the players and often organising warm up games with other super league sides and this created a much stronger showing and improved results. This also led to an increased movement to having the tournament staged in Australia. During this period, the matches were fixtured in late February, still before the commencement National Rugby League season but in the early stages of the new Super League season.

In September 2014 it was announced that the World Club Challenge name would be changed to the World Club Series with six clubs participating - 3 from each league.[9] It took place between February 20–22, 2015, and featured three matches, the first and second essentially being two exhibition games and the final game being for the Championship trophy between the two respective premiers as in previous years.[10]

18 teams have competed in the World Club Challenge with 12 teams being successful and being crowned world champions.

The World Club Challenge has been sponsored sporadically since its formation with 7 different sponsors.