Wright Township is a township in Luzerne County, Pennsylvania, United States. The population was 5,651 at the 2010 census.[1]LawEnforcement is provided by the Wright TWP Police they are located in the Municipal building they employ over 8 officers. The Township has a Park with tennis courts a basketball court and a Park. 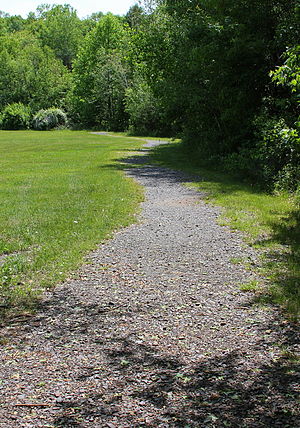 According to the United States Census Bureau, the township has a total area of 13.3 square miles (34.5 km2), all of it land.

There were 2,005 households, out of which 35.0% had children under the age of 18 living with them, 69.3% were married couples living together, 7.4% had a female householder with no husband present, and 20.7% were non-families. 18.1% of all households were made up of individuals, and 9.7% had someone living alone who was 65 years of age or older. The average household size was 2.70 and the average family size was 3.09.

Wright Township contains a very popular recreational park.[3] It is located between Route 309 and South Main Road in the community of Mountain Top. The park includes four tennis courts, two blacktop basketball courts, a baseball field, and two soccer fields. The park is located in a wooded area and contains many nature trails. The basketball courts and one of the tennis courts are lighted during the spring and summer months. It also has an ice hockey rink and a splash fountain for kids in addition to the playground. The park is very well kept and hosts camps for children during the working hours of the summer, so parents can feel safe leaving their children. Wright Townships is the location of the trailhead to the Black Diamond Trail—a section of the D&L Trail.