Hokkien, a Min Nan variety of Chinese spoken in Southeastern China, Taiwan and Southeast Asia, does not have a unitary standardized writing system, in comparison with the well-developed written forms of Cantonese and Mandarin. Since there is no official standardizing body for Hokkien except within Taiwan, there are a wide variety of different methods of writing in Vernacular Hokkien. Nevertheless, vernacular works written in the Hokkien dialect are still commonly seen in literature, film, performing arts and music.

Prior to the modern era, the main written language of China was Classical Chinese, which has grammar and vocabulary based on Old Chinese used in ancient times. Whilst the written form of Chinese remained static, the spoken varieties of Chinese diverged further away. In the early 20th century, reformers in China saw the need for language reform and championed the development of a writing system that allowed Chinese people to write the language the same way they speak, and eventually the vernacular language movement took hold, leading to the development of the standardized written language known as Vernacular Chinese. Because Mandarin Chinese had the largest number of speakers amongst all varieties of Chinese, it was chosen as the basis for the vernacular standard.

However, there are various differences between the spoken Chinese varieties, such as Mandarin, Cantonese and Hokkien, such as variations in vocabulary and grammatical particles, meaning that Vernacular Chinese is less suited for writing texts spoken in Hokkien. Various expressions in Hokkien, as with other Chinese varieties, do not have associated Chinese characters in Vernacular Chinese, meaning that some words originally could not be written. In the case of Cantonese, a vernacular system specifically for writing Cantonese was developed in Hong Kong, then a British colony. On the other hand, since Hokkien was never standardized, different people began to use various separate methods to solve the issue of Hokkien-specific words, where such words would eventually be written using either a Latin-based script, phonetically using bopomofo, or through the use of a Chinese character chosen phonetically with no relation to the original word via meaning.[1]

Varieties of Hokkien are spoken in Fujian Province in mainland China, Taiwan, Chinese communities in Malaysia, Singapore, and other Chinese expatriate communities. Initially there was no effort by the government of the Republic of China on Taiwan, nor other governments, to create a standardized Hokkien vernacular. During the initial stages of Kuomintang rule in Taiwan, the official Kuomintang language policy was to promote the use of Mandarin Chinese in everyday speech, and to discourage the use of other dialects such as Hokkien and Hakka; this was done in an attempt to promote national linguistic unity, and to promulgate a Chinese identity over that of a Taiwanese one for political reasons.[1] Following the Taiwan localization movement, education and everyday usage of spoken and written Hokkien by local Taiwanese became more widely used. A Chinese character online dictionary for Hokkien was released in 2008 by the ROC Ministry of Education.[2] Nevertheless, within literature circles there is still ongoing debate over which writing system should be used to write Taiwanese Hokkien, and controversy exists between the various rival systems currently used to write Hokkien. Today usage of languages remains a politicized issue in Taiwan. In Singapore, in an effort to promote Mandarin as a lingua franca amongst ethnic Chinese through the Speak Mandarin Campaign, usage of other varieties such as Hokkien is discouraged.

Today, whilst Taiwanese Hokkien speakers speak in their variety of Hokkien, they would officially write in Vernacular Chinese for formal documents, and only use vernacular Hokkien writings during informal occasions. In Taiwan, vernacular Chinese is used for academic writings, newspaper articles and television news report headlines, whilst Hokkien writings are used in novels, songs lyrics, film subtitles, theatrical and opera scripts, and in informal communication. 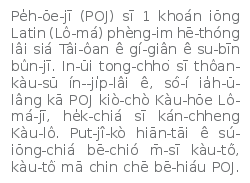 Pe̍h-ōe-jī (Chinese: 白話字) is a Latin alphabet developed by Western missionaries working in Southeast Asia in the 19th century to write Hokkien. Pe̍h-ōe-jī allows Hokkien to be written phonetically in the Latin script, meaning that phrases specific to Hokkien can be written without having to deal with the issue of non-existent Chinese characters. Currently usage of Pe̍h-ōe-jī is restricted to some Taiwanese Christians, non-native learners of Hokkien, and native-speaker enthusiasts in Taiwan. POJ remains the Taiwanese script with "the richest inventory of written work, including dictionaries, textbooks, literature [...] and other publications in many areas".[3]

Pe̍h-ōe-jī can also be used along with Chinese characters in a mixed script called Hàn-lô, where words specific to Hokkien are written in Pe̍h-ōe-jī, and words with associated characters written in Han Characters.

Sample text: 我像離水ㄟ魚 ("I am like the fish that has left the water", with ㄟ being used for ê)

During the period of Taiwan under Japanese rule, a Kana-based system was introduced to gloss Hokkien writing in Chinese characters, as well writing as other languages of Taiwan.

The character for the third person plural (they) in some Hokkien dialects, 亻因 (in), is present within the Unicode Standard (U+2A736 𪜶); however only a very limited number of fonts currently support its display.

In many cases, when writing Hokkien using Chinese characters phonetically, the use of characters is entirely unrelated to the original meaning of the phrase. While most Hokkien morphemes have standard designated character, they are not always etymological or phono-semantic. Similar-sounding, similar-meaning or rare characters are commonly borrowed or substituted to represent a particular morpheme. In addition, there may be many different ways to write a specific Hokkien phrase using Chinese characters. Wanhua District in Taipei is commonly written as 萬華 in Chinese (literally "ten thousand flowers"); however, the original meaning of the location name, pronounced Báng-kah in Taiwanese Hokkien (old character form 艋舺), is a rendering of a non-Chinese indigenous name for "boat".[1] Along with location names, common words also have orthography problems due to non-standardization; chhit-thô or thit-thô (lit. "play (around)") is commonly written as 𨑨迌; however, neither characters have anything to do with the act of "playing" (the characters mean "near" and "cunning, deceitful").[1] Within Robert Cheng's publication of a Han character edition of the Taiwanese Hokkien novella Kho-ai e siu-jin (lit. "Beloved Enemy") by Lai Jinsheng, the word lo˙-moa, meaning "gangster" and cognate with Vernacular Chinese liúmáng (流氓), is transcribed as 鱸鰻; these two phonetically-used characters literally translate to "perch-eel".[1]

Additional examples include the word for "beautiful" (美 bí is the literary form), which has the vernacular morpheme suí represented by characters such as 媠 (an obsolete character), 婎 (a vernacular reading of this character) and even 水 (transliteration of the sound suí), and "tall" (高 ko is the literary form), whose morpheme kôan is 懸.[6] Common grammatical particles are not exempt; the negation particle m̄ (not) is variously represented by 毋, 呣 or 唔, among others. In other cases, characters are invented to represent a particular morpheme (a common example is the non-standard character 亻因 in, which represents the personal pronoun "they"). In addition, some characters have multiple and unrelated pronunciations, adapted to represent Hokkien words. For example, the Hokkien word bah ("meat") has been reduced to writing via 肉, which has etymologically unrelated colloquial and literary readings (he̍k and jio̍k, respectively).[7][8] In other cases, a character is borrowed to represent a morpheme with the same meaning, but a different pronunciation; the morpheme kē ("low", as in kē-thn̂g 低糖 'low sugar') has been assigned the character 低, whose phonetic reading is te, by the Republic of China's Ministry of Education. Another case is the word 'to eat,' chia̍h, which is often transcribed in Taiwanese newspapers and media as 呷 (a Mandarin transliteration, xiā, to approximate the Hokkien term), even though its recommended character in dictionaries is 食.[9]

Victor H. Mair makes an estimate that if "pure, unadulterated spoken vernacular Taiwanese" were written exclusively in Chinese characters, with minimal use of Mandarin phrases, over 25% of morphemes would have no character, about 25% would have arbitrarily selected (yet more or less conventionally accepted) characters that are homophones or near-homophones, 10% would be written using characters exclusive to Hokkien, and 40% would be written with characters that have the correct sound and meaning. However, in more colloquial styles of Taiwanese Hokkien, the proportion of morphemes written with conventionally accepted characters would drop even lower than 40%.[1]

Moreover, unlike Cantonese, Hokkien does not have a universally accepted standardized character set. Thus, there is some variation in the characters used to express certain words and characters are can be ambiguous in meaning. In 2007, the Ministry of Education of the Republic of China formulated and released a standard character set to overcome these difficulties.[10] These standard Chinese characters for writing Taiwanese Hokkien are now taught in schools in Taiwan.

When writing Hokkien in Chinese characters, some writers create 'new' characters when they consider it impossible to use existing ones; this corresponds to similar practices in character usage in Cantonese, Vietnamese chữ nôm, Korean hanja and Japanese kanji. These are usually not encoded in Unicode (or the corresponding ISO/IEC 10646: Universal Character Set), thus creating problems in computer processing.

The following table lists a few examples displaying differences in vocabulary between Vernacular Chinese based on Mandarin, and Taiwanese Hokkien written in Chinese characters:

In addition, Hokkien literature can consist of phrases that are vernacular to Hokkien, as well as literary terms originating from Classical Chinese. The following list of Taiwanese Hokkien words is adapted from a list by scholar Ong Iok-tek, contrasting vernacular terms with relevant literary terms;[11] the English translations have been added by Mair.[1]