Xàbia (Valencian: [ˈʃabia]) or Jávea (Spanish: [ˈxaβea]) is a coastal town in the comarca of Marina Alta, in the province of Alicante, Valencia, Spain, by the Mediterranean Sea. Situated behind a wide bay and sheltered between two rocky headlands, the town has become a very popular small seaside resort and market town. Half of its resident population and over two thirds of its annual visitors are foreigners.[1] 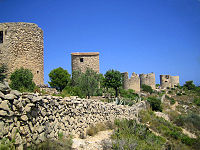 The area was first inhabited in prehistoric times, 30,000 years ago by cave dwellers on Montgó.[according to whom?][citation needed] Subsequent residents have included Stone and Bronze-age peoples, Romans, Greeks, Phoenicians, Visigoths, Germanic, Carthaginians, and Moors.[citation needed] Roman fishing boats used the port, and there is evidence that dates the Roman occupation of Xàbia to the 2nd century BC, it makes Xàbia the oldest known Roman site on the coast with a commercial port for fish and minerals.[citation needed]

In the 6th century AD. Christian Visigoth monks, came to Xàbia and founded the monastery of Sant Martí, which likely gave its name to the cape in the area named Cap San Martí. Hermenegild, son of the Visigoth king Leovigild of Toledo, sought refuge in the Monastery after angering his father by marrying a Christian girl. When his father's troops arrived to arrest him all but one monk fled to Portichol; Hermenegild and the old monk were killed.[2] Several people with Visigoth names still live in the area.

There is little left of the Moors other than some inscribed gravestones and ceramics, although they were here from about 714 AD until they were expelled in 1609.[3] The hermitage of Popol, dates to the 14th century. 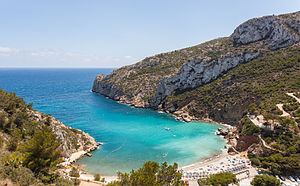 Xàbia is situated in the north of the province, on the easternmost point of the Mediterranean coast. The island of Ibiza lies some 90 kilometres (56 mi) to the east, and it can be seen on clear days. Flat, fertile agricultural land stretches for miles inland, criss-crossed by small streams and used primarily for growing citrus and olive trees. The coastline of Xàbia features four capes; Cabo de San Antonio, Cap de la Nau (the largest), Cap Negre and Cap Martí.[4]

The Montgó Massif, which shelters Xàbia, is the highest summit of the region standing at a height of over 750m. The Parque natural del Macizo del Montgó was declared in 1987, stretching across the area of La Plana to the cape of Sant Antoni.[5]

The port has a gravel beach and marina, known as Duanes de la Mar. Whilst the history of the harbour stretches back to the 15th century, the first jetty was built in 1871 and it became an important gateway for the export of raisins.[6] The raisin trade collapsed at the end of the 19th century, and the settlement became only a fishing harbour. The modern harbour was built in the 1950s and 1960s. The nautical club has been in the central area of the harbour since 1963. The landmark is the church of Mare de Déu de Loreto, built in 1967 in the shape of an oval boat keel, to resemble a fishing vessel bursting through the waves.[6]