Yinghuo-1 was a Chinese Mars-exploration space probe, intended to be the first Chinese spacecraft to explore Mars. It was launched from Baikonur Cosmodrome, Kazakhstan, on 8 November 2011, along with the Russian Fobos-Grunt sample return spacecraft, which was intended to visit Mars' moon Phobos.[2][6] The 115-kg (250-lb) Yinghuo-1 probe was intended by the CNSA to orbit Mars for about two years,[1] studying the planet's surface, atmosphere, ionosphere and magnetic field.[7] Shortly after launch, Fobos-Grunt was expected to perform two burns to depart Earth orbit bound for Mars. However, these burns did not take place, leaving both probes stranded in orbit.[8] On 17 November 2011, Chinese state media reported that Yinghuo-1 had been declared lost by the CNSA.[9] After a period of orbital decay, Yinghuo-1 and Fobos-Grunt underwent destructive re-entry on 15 January 2012, finally disintegrating over the Pacific Ocean.[5][10]

On 26 March 2007, the director of the China National Space Administration, Sun Laiyan, and the head of the Russian Space Agency, Anatoly Perminov, signed a landmark space co-operation accord, entitled the "Cooperative Agreement between the China National Space Administration and the Russian Space Agency on joint Chinese-Russian exploration of Mars". One stipulation of the agreement was the construction and launch of the Yinghuo probe and its Russian counterpart, Fobos-Grunt.[4] 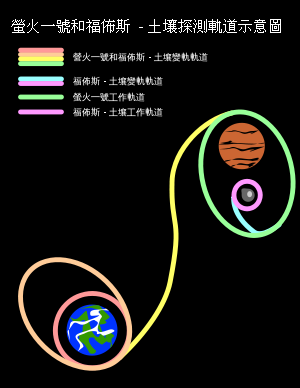 Following its transit to Mars, Yinghuo-1 was planned to separate from Fobos-Grunt in October 2012[13] and enter a 72.8-hour equatorial Martian orbit,[1] with an orbital inclination of approximately 5 degrees.[citation needed] Fobos-Grunt and Yinghuo-1 would have conducted Mars ionosphere occultation experiments together,[14] although Fobos-Grunt's primary objective was to obtain surface samples from the Martian moon Phobos. Yinghuo-1 would have experienced periods of up to 8.8 hours in darkness when its orbit carried it over Mars' nightside; it would have run on reserve power during these periods, as its solar panels would have been unusable without direct sunlight.[1]

On 17 October 2011, the completed Yinghuo-1 satellite arrived at Baikonur Cosmodrome with Fobos-Grunt, beginning payload processing operations in preparation for its November launch.[15]

China's Yinghuo-1 and the Russian Fobos-Grunt spacecraft were launched together aboard a Ukrainian Zenit rocket with a Fregat upper stage from Baikonur Cosmodrome, Kazakhstan, on 8 November 2011.[2][13] Shortly after launch, Fobos-Grunt was expected to perform two burns to depart Earth orbit and begin its journey to Mars. However, these burns did not take place, stranding the two spacecraft in their parking orbit.[16] Despite repeated efforts to contact Fobos-Grunt and rectify the problem, the spacecraft continued to lose altitude.[17] On 17 November, Chinese state media formally declared the Yinghuo-1 probe lost,[9] and Fobos-Grunt's orbit gradually began to decay.

On 14 January 2012, it was reported that Fobos-Grunt and Yinghuo-1 were beginning their final descent into Earth's atmosphere, falling at a rate of several hundred metres per hour from their 147-kilometre (91 mi) orbital altitude.[10] The two spacecraft completed their re-entry and disintegrated over the Pacific Ocean on 15 January.[5]