From Infogalactic: the planetary knowledge core
Jump to: navigation, search
Not to be confused with Yuba, California.

Yuba City is a city in Northern California and the county seat of Sutter County, California, United States. The population was 64,925 at the 2010 census.

Yuba City is the principal city of the Yuba City Metropolitan Statistical Area which encompasses all of Sutter County and Yuba County. The metro area's population is 164,138.[7][8] It is the 21st largest metropolitan area in California ranked behind Redding and Chico. Its metropolitan statistical area is part of the Greater Sacramento CSA.

The Maidu people were settled in the region when they were first encountered by Spanish and Mexican scouting expeditions in the early 18th century. One version of the origin of the name "Yuba" is that during one of these expeditions, wild grapes were seen growing by a river, and so it was named "Uba", a variant spelling of the Spanish word uva (grape).

The Mexican government granted a large expanse of land which included the area in which Yuba City is situated to John Sutter, the same John Sutter upon whose land gold was subsequently discovered in 1848. He sold part of this tract to some enterprising men who wished to establish a town near the confluence of the Yuba River and the Feather River, tributaries of the Sacramento River, with an eye to developing a commercial center catering to the thousands of gold miners headed upstream to the gold fields. At the same time, another town was developing on the eastern bank of the Feather River, the beginnings of what later would become Marysville.

By 1852, Yuba City, was a steamboat landing, had one hotel, a grocery store, a post office, approximately 20 dwelling homes with a population of about 150.

The county seat for Sutter County, CA was chosen to be Yuba City in 1854. The same year, however, voters decided that Nicolaus, CA would be a better location, and the county seat was moved there. County voters returned to their first choice of Yuba City two years later, in 1856, and it has remained the county seat since.[9]

Yuba City saw its first major influx of population after World War II, pushing residential areas west and south from the city's original center. Orchards were turned into residential areas as new homes were built to provide the amount of people migrating to the city.[10]

In December 1955, a series of storms dropped torrential rain throughout northern California. The deluge caused all the rivers in the region to overflow their banks and to break through levees. The Christmas Eve levee break at Yuba City was particularly disastrous, with 38 people losing their lives,[9] and heavy damage occurring in the downtown section. According to Dick Brandt, manager of the Yuba County airport in 1955, between 550 and 600 Sutter County residents were rescued from the floodwater by helicopter.[11]

On March 14, 1961, a B-52 Stratofortress carrying nuclear weapons, flying near Yuba City encountered a pressurization problem, and had to drop to a lower altitude. As such, more fuel than expected was used, and the aircraft ran out of fuel. It crashed before meeting with a tanker aircraft. The pilot gave the bailout command, and the crew egressed at 10,000 ft, except for the pilot, who ejected at 4,000 ft, while avoiding a populated area. The aircraft was destroyed. The weapons, two Mark 39 (3.8 megatons each) thermonuclear bombs (identified from declassified Department of Energy films and photographs) were destroyed on impact though no explosion took place, and there was no release of radioactive material as a result.[12]

On May 21, 1976, a school bus carrying members of the Yuba City High School's choir to a performance at Miramonte High School in Orinda, California plunged 28 feet off the exit ramp on I-680 at Marina Vista Road in Martinez, California. Twenty-seven students and one adult chaperone died and twenty-three students were seriously injured.[13]

Yuba City has been home to a significant Muslim population, including Pakistani-Americans descended from c. 1902 immigrants. In 1994 the Muslim community completed a mosque that cost an estimated $1.8 million and many hours of donated work. Soon after, the mosque was destroyed by an act of arson, the first time that a hate crime destroyed a mosque in the United States. Eventually the mosque was rebuilt with help of Sikhs, Mormons and other Christians, and more groups. The story is told in the 2012 documentary An American Mosque. 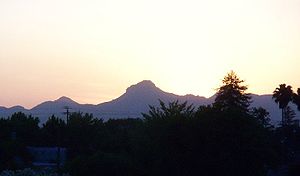 The Yuba City area is located 40 miles north of Sacramento and situated in the Sacramento Valley. It is home to the Sutter Buttes, the smallest mountain range in the world.[15] The Feather River borders the city to the east and the area is sometimes referred to as the "Feather River Valley", which divides the city from its neighbor Marysville.

Yuba City has a mediterranean climate (Csb according to the Köppen climate classification system) which consists of cool, wet winters and hot, dry summers. On average, January is the coolest and wettest month, and July is the hottest and driest. During the wet season from mid-October to mid-April, Yuba City sees frequent rain and is usually under the tule fog. Snow is rare in the valley, but cold waves from the north may bring some light snow and ice. Spring is wet in the beginning but becomes drier and warmer as summer months approach. May has some rain, but usually from thunderstorms, not winter storms. Rain is rare from June to September. The Delta Breeze, which comes from the Bay Area on summer nights, helps cool temperatures and adds humidity. At times the Delta Breeze is strong enough to bring coastal fog inland to the Sacramento Valley. Autumn starts out warm but becomes cooler, wetter, and foggier as the season progresses.

Yuba City is home to the largest dried fruit processing plant in the world,[21] Sunsweet Growers Incorporated. In 1988 Yuba City was home to the California Prune Festival. In 2001 the name was changed to the California Dried Plum Festival and in early 2003 directors announced the end of the festival's 15-year run in the Yuba-Sutter area. This was primarily due to rise in costs, difficulty in securing sponsors, and competition from other festivals.

Being a small town, retail and healthcare make up the largest sectors of the economy.[22] Some other notable employers include the Geweke Auto Group, Hilbers Incorporated, SharpeSoft, Jaeger Construction and Nordic Industries, Inc. Farming is also the most important part of the Yuba-Sutter area.

According to the City's 2014 Comprehensive Annual Financial Report,[23] the top employers in the city are:

Yuba City is known for its sizeable Sikh community.[24][25] The Sikh population in the Yuba-Sutter Area has grown to be one of the largest in the United States and one of the largest Sikh populations outside of the Punjab state of India. Each year on the first Sunday of November, Sikhs from the United States, Canada, India, the United Kingdom and throughout the world attend the Sikh parade in Yuba City, which commemorates the receipt by Sikhs of their Holy scripture, the Guru Granth Sahib, in 1708. The 4.5-mile-long parade features floats and a procession of parade participants. The 2005 parade drew an estimated 56,000 people while the 2007 parade was estimated to draw between 75,000 to 85,000 people of both Sikh and non-Sikh background. In 2008, an estimated 80,000 people came out for the event which is now considered one of the largest gatherings in Northern California.[26] In 2012, the parade participants rose to an estimated number of 150,000 people.

In the United States House of Representatives, Yuba City is in California's 3rd congressional district, represented by Democrat John Garamendi.[28] 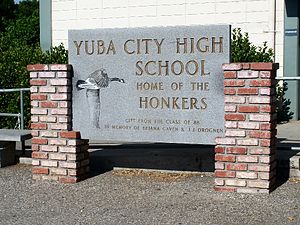 The main newspaper for Yuba City area is the Appeal-Democrat. The newspaper is printed in Marysville, but serves the entire Yuba-Sutter area. The Sacramento Bee is also widely sold and read in Yuba City.

Although KETQ-LP 93Q, KUBA-AM, KCYC-LP, KOBO, and KRYC-LP are the only radio stations within the city, there are a wide variety of others broadcasting nearby.