From Infogalactic: the planetary knowledge core
Jump to: navigation, search
For other uses, see ZTE (disambiguation).

ZTE operates in three business units - Carrier Networks(54%)-Terminals(29%)-Telecommunication(17%). ZTE's core products are wireless, exchange, access, optical transmission, and data telecommunications gear; mobile phones; and telecommunications software.[3] It also offers products that provide value-added services,[4] such as video on demand and streaming media.[5] ZTE primarily sells products under its own name but it is also an OEM.[6]

ZTE is one of the top five largest smartphone manufacturers in its home market,[7] and in the top ten, worldwide.

ZTE, initially founded as Zhongxing Semiconductor Co., Ltd in Shenzhen, China, in 1985, was incorporated by a group of investors associated with China's Ministry of Aerospace.[8] In March 1993, Zhongxing Semiconductor has changed its name to Zhongxing New Telecommunications Equipment Co., Ltd with capital of RMB 3 million, and created a new business model as a "state-owned and private-operating" economic entity. Ties to the state notwithstanding, the corporation has evolved into ZTE Corporation of being publicly traded having made an initial public offering (IPO) on the Shenzhen stock exchange in 1997 and another on the Hong Kong stock exchange in December, 2004.[8]

While the company initially profited from domestic sales,[9] it vowed to use money from its 2004 Hong Kong IPO to further expand R&D, overseas sales to developed nations, and overseas production.[10] Making headway in the international telecom market in 2006, it took 40% of new global orders for CDMA networks[11] topping the world CDMA equipment market by number of shipments.[12] That same year also saw ZTE find a customer in the Canadian Telus[13] and membership in the Wi-Fi Alliance.[14] More customers in developed nations soon followed Telus' lead, and in 2007 ZTE had sold to UK's Vodafone, Spain's Telefonica, and the Australian Telstra,[13] as well as garnering the greatest number of CDMA contracts globally.[15] By 2008 ZTE could claim its customer base was truly global, as it had made sales in 140 countries.[13]

In 2009, the company had become the worldwide third-largest vendor of GSM telecom equipment, and about 20% of all GSM gear sold throughout the world that year was ZTE branded.[16] As of 2011 it holds around 7% of the key 3GPP Long Term Evolution patents[17] and that same year launched the world's first smartphone with dual GPS/GLONASS navigation, MTS 945. ZTE claims to devote 10% of its annual revenue on research and development each year, and it could be producing patents and utility licenses at a furious pace.[18][19] ZTE has filed 48,000 patents globally, and with more than 13,000 patents granted. 90% more patents are invention-related. In two consecutive years (2011 and 2012), ZTE has been granted the largest number of patent applications globally,[20] which is the first for a Chinese company.[21] 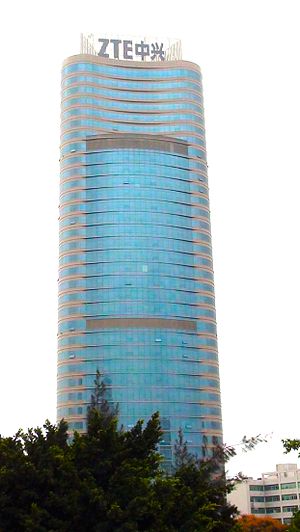 The ZTE Tower in Shenzhen

ZTE entered the Australian market in 2005,[22] and as of 2009 ZTE (Australia) Pty Ltd[23] acts as the exclusive supplier of ZTE handsets, network cards, and as OEM Supplier to customers, such as Telstra, and Optus in Australia.

A North American subsidiary of ZTE,[25] with headquarters in Richardson, Texas,[26] ZTE USA Inc offers wireless handset and networking solutions in the US. ZTE USA partners with NBA's Houston Rockets for the season of 2013-2014[25]

ZTE do Brasil Ltda. was founded in 2002 with headquarters in São Paulo and offices in Rio de Janeiro and Brasília; providing mobile devices and network solutions for the Brazilian market.

ZTE[27] was introduced in the Pakistani market in 1999 with its headquarters in Islamabad and major offices in Lahore and Karachi. Providing Telecom Equipment, Network Solutions and Managed Services to telecom operators in Pakistan i.e. PTCL, Telenor, Mobilink, Zong, SCO

Zonergy is a renewables company with interests in electricity generation through solar parks in China and Pakistan and palm oil cultivation in Indonesia to produce biofuels. ZTE is a major shareholder and was instrumental in the creation of the company in 2007 but holds a minority of the shares in the entity.[28] 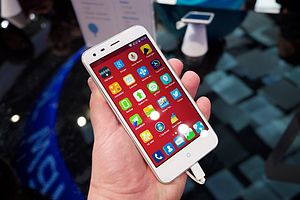 A ZTE Blade S6 Plus

At Mobile World Congress 2014 in Spain, Microsoft announced that ZTE is the latest hardware partner of Windows Phone platform.[40]

ZTE is also a provider of Core Routing and Core Network equipment, also known as Network Elements such as: 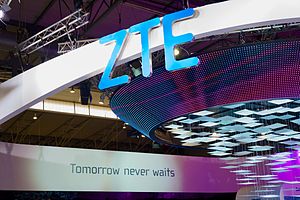 A good number of ZTE's customers are outside of China. During the 2000s, the majority were developing country mobile network operators, but ZTE products see use in developed countries as well. The UK's Vodafone, Canadian Telus, Australia's Telstra, as well as France Telecom have all purchased equipment from ZTE.[42]

Norwegian telecommunications giant Telenor, one of the world’s largest mobile operators, banned ZTE from "participating in tenders and new business opportunities because of an alleged breach of its code of conduct in a procurement proceeding” during a five-month time span ending in March 2009.[48]

Contract negotiations to build a broadband network for the Philippine government may have included improper activities.[49] The project was later canceled.[49]

In December 2010, ZTE sold systems for eavesdropping on phone and Internet communications to the government-controlled Telecommunication Company of Iran.[50] This system may help Iran monitor and track political dissidents.

At least one ZTE mobile phone (sold as the ZTE Score in the United States by Cricket and MetroPCS) can be remotely accessed by anyone with an easily obtained password.[32]

In 2012, politicians in the United States of America raised other security concerns regarding ZTE and another Chinese wireless equipment manufacturer, Huawei.[51]