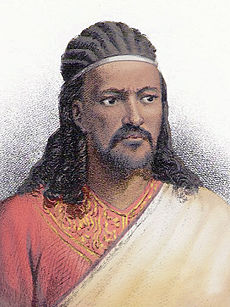 Tewodros II, who brought an end to the Zemene Mesafint

The Zemene Mesafint (Ge'ez: ዘመነ መሳፍንት zamana masāfint, modern zemene mesāfint, variously translated "Era of Judges," "Era of the Princes," "Age of Princes," etc.; named after the Book of Judges) was a period in Ethiopian history when the country was divided within itself into several regions with no effective central authority. It was a period in which the Emperors were reduced to little more than figureheads confined to the capital city of Gondar.

Crummey, Rubenson, Abir and Shiferaw Bekele agree that in all the disintegration, chaos, and anarchy, the Yejju lords ruled the country in the name of the Solomonic dynasty.[2] That being said, the term that perhaps needs to be precisely defined has to do with the appellation of the Yejju. Very often it is called the Yejju Dynasty. There is no problem with this name except that at times it created confusion with the Yejju province. It is preferable to call them by the name that they themselves preferred and by what others called them: Wara Seh. This appellation clearly refers to the family rather than to the province.[3] Scholars now agree that of the Wara Seh rulers, Ras Gugsa's reign (1800–1825) was characterized more by peace than by war.

The power of the Wara Seh rulers was much more than predominance. They exercised actual authority over the other lords. The latter were their tributary lords and the Wara Seh were suzerains or overlords.[4] To be sure, the Wara Seh did not exercise absolute authority outside of the provinces directly under their rule. These provinces extended from Begemeder across Chachaho Pass to the Amhara provinces of Maqet, Wadla, Dalanta, and Dawent. Their authority over the lords of the rest of the regions – Gojjam, Wollo, Semien, Tigray up to Hamasien, Wag and the like – was rather restricted to the power of making them pay regular tributes, be in attendance in their court for a given period of the year, participate in their wars and exercise right of appeal in matters of justice.[2] They also had the right of confirmation in their offices when new lords came to power in one way or another. At times, they even went to the extent of chaining some of their recalcitrant lords.[2]

During the Zemene Mesafint, various lords came to abuse their positions by making Emperors, and encroached upon the succession of the dynasty, by candidates among the nobility itself: for example, on the death of Emperor Tewoflos, the chief nobles of Ethiopia feared that the cycle of vengeance that had characterized the reigns of Tewoflos and Tekle Haymanot I would continue if a member of the Solomonic dynasty were picked for the throne, so they selected one of their own, Yostos, to be King of Kings (Negusa Nagast). However, the tenure of Yostos was brief and the throne came into the hands of the Solomonic house once again.

The reign of Iyasu II had brought the empire once again to disaster. He ascended the throne as a child, allowing his mother, Empress Mentewab to play a major role as his Regent. Mentewab had herself crowned as co-ruler, becoming the first woman to be crowned in this manner in Ethiopian history. Beyond the capital of Gondar, the Empire suffered from regional conflict between nationalities that been part of the Empire for hundreds of years—the Agaw, Amharans, Showans, and Tigreans—and the Oromo newcomers. Mentewab's attempt to strengthen ties between the monarchy and the Oromo by arranging the marriage of her son to the daughter of an Oromo chieftain from Yejju backfired in the long run.

Her attempt to continue in this role after the death of her son (1755) into the reign of her grandson Iyoas brought her into conflict with Wubit (Welete Bersabe), Iyasu's widow, who believed that it was her turn to serve as regent. When Iyoas assumed the throne upon his father's sudden death, the aristocrats of Gondar were stunned to find that he preferred to speak in the Oromo language rather than in Amharic, and favored his mother's Yejju relatives over the Qwarans of his grandmothers family. Iyoas further increased the favor given to the Oromo when adult. On the death of the Ras of Amhara, he attempted to promote his uncle Lubo governor of that province, but the outcry led his advisor Wolde Leul to convince him to change his mind.

The conflict between these two queens led to Mentewab summoning her relatives with their armed supporters from Qwara to Gondar to support her. Wubit responded by summoning her own Oromo relatives and their considerable forces from Yejju. Fearing that the power struggle between the Qwarans and the Yejju led by the Emperor's mother Wubit would erupt into an armed conflict, the nobility summoned the powerful Ras Mikael Sehul to mediate between the two camps. He arrived and shrewdly maneuvered to sideline the two queens and their supporters making a bid for power for himself. Mikael settled soon as the leader of Amharic-Tigrean (Christian) camp of the struggle.

Iyaos' reign becomes a narrative of the struggle between the powerful Ras Mikael Sehul and the Oromo relatives of Iyoas. Iyoas effectively had little say, as he inherited an empty Imperial treasury and depended heavily on his Oromo relations. As he increasingly favored Oromo leaders like Fasil, his relations with Mikael Sehul deteriorated. Eventually Mikael Sehul deposed the Emperor Iyoas (7 May 1769). One week later, Mikael Sehul had him killed; although the details of his death are contradictory, the result was clear: for the first time an Emperor had lost his throne in a means other than his own natural death, death in battle, or voluntary abdication. From this point forward the Empire devolved ever more openly in the hands of the great nobles and military commanders; because of its effects, Iyoas' assassination is usually regarded as the start of the Era of the Princes.

An aged and infirm imperial uncle prince was enthroned as Emperor Yohannes II. Ras Mikael soon had him murdered, and underage Tekle Haymanot II was elevated to the throne. Then Mikael Sehul was defeated in the Three battles of Sarbakusa and the triumvirate of Fasil, Goshu of Amhara, and Wand Bewossen of Begemder placed their own emperor on the throne. More emperors followed as these three fell from power and were replaced by other strongmen, who constantly elevated and removed emperors; Tekle Giyorgis is famous for having been elevated to the throne altogether six times and also deposed six times.

Meanwhile, Amha Iyasus of Shewa (1744–1775) wisely kept out of this endless fighting, devoting his energies to consolidating his kingdom and founding Ankober. This was a practice that his successors followed to the end of the kingdom.

The years from 1771 to 1784 constituted a sort of interregnum or a transition age between two eras – the era of the absolute monarchy and the era of rule by the Wara Seh rulers. Tekle Giyorgis I, whose first reign was from 1779 to 1784, tried to assert all over again some, if not all, of the powers of the monarchy. Unfortunately for him and the dynasty as a whole, he ended up losing everything. Ali I defeated him in early 1784 at a place called Afara Wanat and replaced him with Iyasu III who was a full puppet.[5] Two years later, in 1786, Ali I became Ras bitwadad and with his ascent to power, the Yejju Dynasty, or more precisely, the Wara Seh Dynasty came into being. Ras Ali I and his remaining Wara Seh family members became Enderases (Regents) of the Ethiopian Empire. Until the emergence of Kassa Hailu, the future Emperor Tewodros II, power was transferred from Ras Ali I to his brother Ras Aligaz. After the death of Ras Aligaz, Ras Wolde Selassie, hereditary ruler of Enderta and overlord of Tigray, became Enderase of the Empire, briefly taking power away from the Wara Seh rulers. Upon his death, power was transferred to Ras Aligaz's nephew, Ras Gugsa, who in turn transferred power to his sons Ras Yimam, Ras Mariye, and Ras Dori. After the death of Ras Dori, Ras Ali II, a nephew of Ras Gugsa, became Enderase.[6]

The Zemene Mesafint, which in a span of eighty-six years saw twenty-three emperors occupy the throne (some were placed on and removed from the throne numerous times) came to an end with the rise of Kassa Hailu – better known by his later throne name of Tewodros II of Ethiopia. Kassa won his way to control the imperial throne first by occupying Dembiya, then following a series of battles beginning with Gur Amba (27 September 1852) and ending with Battle of Derasge (1855), came to control all of Ethiopia. More importantly, with his triumph over Ras Ali II at the Battle of Aysal, Kassa Hailu ended the Wara Seh Dynasty, and with imperial power once again in the hands of a single man, the Zemene Mesafint is considered to have ended, and the history of Modern Ethiopia to have begun.