Zibad (Persian: زيبد‎‎, also Romanized as Zībad)[1] is a village in Zibad Rural District, Kakhk District, Gonabad County, Razavi Khorasan Province, Iran. At the 2006 census, its population was 868, in 288 families.[2]

Zibad, meaning beautiful, was a famous ancient city in Shahnameh. According to Shahnameh Ferdowsi (around 1000 AD), it was the place of a famous war called 12 rokh (12 hero) between Iran and Turan. Zibad also has an ancient qanat that may be more than 1600 years old. 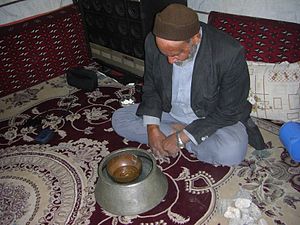 Reconstruction of the scene with a real manager of the water clock, Iran

According to Callisthenes, the Persians were using water clocks in 328 BCR to ensure a just and exact distribution of water from qanats to their shareholders for agricultural irrigation. The use of water clocks in Iran, especially in Zibad, dates back to 500BCE. Later they were also used to determine the exact holy days of pre-Islamic religions, such as the Nowruz, Chelah, or Yaldā - the shortest, longest, and equal-length days and nights of the years. The water clocks used in Iran were one of the most practical ancient tools for timing the yearly calendar.[2] .[3]