Znojmo (Czech pronunciation: [ˈznojmo]; German: Znaim) is a town in the South Moravian Region of the Czech Republic, the administrative capital of the Znojmo District. 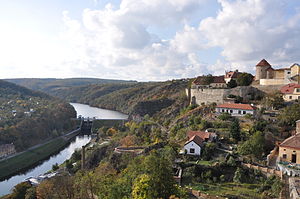 The town is situated on a rock outcropping on the steep left bank of the Thaya (Dyje) River, about 55 km (34 mi) southwest of the regional capital Brno. Located near the border with Austria, it is connected to Vienna by railway and road (about 80 minutes).

A fortress at the site possibly already existed during the time of the Great Moravian Empire in the 9th century. From about 1055, Znojmo Castle served as the residence of a Přemyslid principality within the Bohemian March of Moravia and a strategic important outpost near the border with the Bavarian March of Austria in the south. Few years later (1101), Luitpold of Znojmo, Duke of Moravia, established Ducal Rotunda of the Virgin Mary and St Catherine in this castle, later depicted by unique scene of genealogy Bohemian and Moravian Dukes of Přemyslide dynasty and the castle was conquered and devastated by Duke Vladislaus II of Bohemia in 1145.

In 1190 Duke Conrad II of Bohemia founded the Premonstratensian Louka Abbey at Znojmo, which became the settlement area of German-speaking immigrants in the course of the medieval Ostsiedlung movement. The royal city of Znojmo was founded shortly before 1226 by King Ottokar I of Bohemia on the plains in front of the reconstructed castle. The town privileges were confirmed by King Rudolf I of Germany in 1278. On 9 December 1437 the Luxembourg emperor Sigismund died at Znojmo and lied in state for three days at the St. Nicholas Church, before his mortal remains were transferred to Nagyvárad (Oradea) in Hungary.

Znojmo is best known for the armistice concluded there in 1809 after the Battle of Wagram between Napoleon and the archduke Charles. It is also the (alleged) birthplace of Leopold Loyka, the driver of Austrian Archduke Franz Ferdinand's car when Ferdinand was assassinated in Sarajevo 1914, an event which triggered the First World War. After the war, it was part of Czechoslovakia except Nazi German occupation between 1938 and 1945. During the period, it was part of Reichsgau Niederdonau. The German Citizens were expelled in 1945 according to the Beneš decrees.

Birthplace of the sculptor Hugo Lederer and writer Charles Sealsfield, it also has a special co-operation relation with Harderwijk, Netherlands. 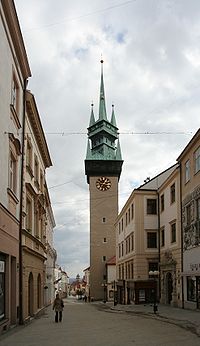 The Gothic Church of St. Nicholas and the Late Gothic Town Hall tower are the most recognizable landmarks. St Nicolas` Church was built in 1348 by Emperor Charles IV, and the town hall, with its 75 m (250 ft) tower, dates from around 1446.

Overlooking the Dyje River valley, on the edge of the medieval city, there is Znojmo Castle, dating back to 11th century, founded by Přemyslid dukes. The only remains of the castle used by the Přemysl dukes is the Romanesque Rotunda of Saint Catherine, the interior of which is covered with 11th-century frescoes depicting biblical scenes and illustrating the life of Přemysl.

Under the city and castle is a vast labyrinth of connected passageways and cellars, Znojmo Catacombs, developed in the 14th and 15th century for defensive purposes and containing wells, drainage, fireplaces, trap doors and escapeways that led beyond the fortifications of the city. 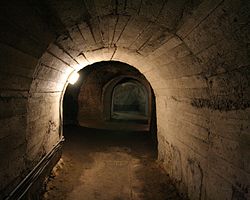 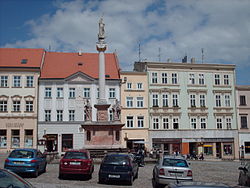 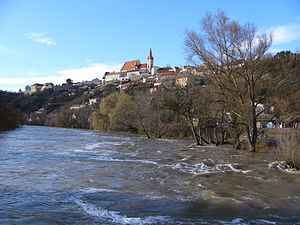 Václav Prokop Diviš (26 March 1698 – 25 December 1765) was a Czech priest, theologian and natural scientist, pioneer in the field of electricity and the constructor of the first electric musical instrument Denis d'or.

St. Clement Mary Hofbauer, C.Ss.R., (born Jan Dvořák) (1751-1820) a Redemptorist priest and a patron saint of Vienna, who served as an apprentice baker in this city in his youth.

Květoslav Svoboda (born in Znojmo on 25 August 1982) - Czech swimmer, took part in many competitions including the Olympic Games 2000 and 2004.