Zonal Art Exhibition "Leningrad" (Leningrad, 1964) (Russian: Зональная выставка "Ленинград" 1964 года) became one of the most significant, successful and productive events in the history of Soviet art exhibitions of the 1960s through the 1980s. The exhibition took place in State Russian Museum.

The Zonal Art Exhibition "Leningrad" was opened at November 3, 1964. Organization and preparation of the Zonal Exhibition engaged a specially formed Exhibition Committee which consisted of 56 of the most authoritative art-experts. Among them were Mikhail Anikushin, Boris Korneev, Anatoli Levitin, Yuri Neprintsev, Gleb Savinov, Joseph Serebriany, Nadezhda Shteinmiller, Mikhail Trufanov, Yuri Tulin, Boris Ugarov, Vecheslav Zagonek, Alexander Zaytsev, and others. It was published a catalog of the exhibition.[1] In total the exhibition displayed 2,000 works of art of painters, sculptors, graphics, masters of arts and crafts, and artists of theater and cinema, and was attended by over 1200 artists of Leningrad. 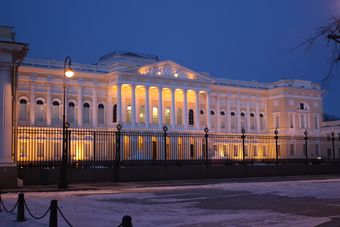 For the exhibition were selected artworks created in the years of 1963–1964, as well as some earlier works. All were exhibited in the first time. Some of them were subsequently found in the collections of leading Soviet art museums, as well as domestic and foreign galleries and collectors.

Historical genre was represented of "The enemy is not broke through" by Sergei Babkov, "October. Triptych", "Red Guards" by Mikhail Natarevich, "Bloody Sunday. January 9, 1905" by Dmitry Oboznenko, "Evacuation in Ladoga" by Piotr Nazarov, "October" by Boris Ugarov, "Petersburg. 9 of May, 1864. Nikolai Chernyshevsky" by Lev Chegorovsky, "The Road of Life", "The Year of 1941", "Ice Highway. Ladoga 23 of April 1942", "Year of 1941" by Boris Korneev, "Leningrad in the Struggle" by Oleg Lomakin, "Bread. The Year of 1941" by Yuri Neprintsev, "Roads of War" by Boris Nikolaev, "A Heir" by Genrikh Pavlovsky, and some others.[3]

Genre painting was represented of "Work" by Piotr Alberti, "Soviet sailors in India" by Andrei Bantikov, "Spring in kolkhoz", "The Plane Arrived" by Leonid Baykov, "Komsomol construction" by Dmitry Belyaev, "Requiem" by Lev Bogomolets, "After surgery" by Piotr Buchkin, "At the Monument to Heros" by Oleg Eremeev, "Guests have Gone" by Maya Kopitseva, "After Bath" by Elena Kostenko, "In the Way", "A Midday" by Boris Lavrenko, "Night Shift", "On the way" by Anatoli Levitin, "Donbass", "Oilmen. A Youth" by Boris Maluev, "Friends", "Ground", "From the Childhood" by Evsey Moiseenko, "May Demonstration" by Nikolai Mukho, "Young Mothers" by Mikhail Natarevich, "Asphalt Layings" Anatoli Nenartovich, "The Tram has Coming to Front" by Yuri Neprintsev, "Haymaking Time" by Sergei Osipov, "To the Home", "At Baba Sasha House", "On the Lawn" by Nikolai Pozdneev, "In a Cornfield" by Stepan Privedentsev, "Talking in Workshop" by Semion Rotnitsky, "Seamen", "Mothers" by Gleb Savinov, "Road to the Sandpit" by Vladimir Sakson, "Alexander Block with Working Picket" by Alexander Samokhvalov, "Summer", "Green Rye" by Boris Shamanov, "Harvesting" by Mikhail Tkachev, "To the School" by Vitaly Tulenev, "Night Shift" by Valery Vatenin, "Сhukotka Spring", "Firstborn", "Returning of Hunters", "Gatherer of Roots", "Waiting", "May" by Andrew Yakovlev, and some others.[3]