Álvaro Barreirinhas Cunhal, who used the name Álvaro Cunhal (Portuguese pronunciation: [ˈaɫvɐɾu kuˈɲaɫ]; 10 November 1913 — 13 June 2005), was a Portuguese communist revolutionary and politician. He was one of the major opponents of the dictatorial regime of Estado Novo. He served as secretary-general of the Portuguese Communist Party (PCP) from 1961 to 1992. He was one of the most pro-Soviet of all western Europe communist leaders, often supporting the Soviet Union's foreign policies, including the intervention in Czechoslovakia in 1968.

Cunhal was born in Coimbra, the third child of Avelino Henriques da Costa Cunhal (Seia, Seia, October 28, 1887 – Coimbra, Sé Nova, December 19, 1966) and wife (m. Coimbra, Sé Nova, August 22, 1908) Mercedes Simões Ferreira Barreirinhas (Coimbra, Sé Nova, May 5, 1888 – Lisbon, September 12, 1971). His father was a lawyer in Coimbra and Seia, and later on in Lisbon, and came from a family of rural bourgeoisie, related to a rich and more aristocratic family, the Cunhal Patrício. His mother was a devout Catholic who wished her son had also become one. He also studied Law at the University of Lisbon, where he joined the PCP, then an illegal organization, in 1931. The deaths of his younger sister Maria Mansueta Barrerinhas Cunhal (Coimbra – Seia, January 13, 1921) and of his older brother António José Barreirinhas Cunhal (Coimbra, 1910 – Lisbon, 1932) struck the grief of both his parents and brothers, but specially of his mother and Álvaro, of whom they had always been close. He visited the Soviet Union for the first time in 1935 to attend the Seventh World Congress of the Comintern in Moscow. He joined the Central Committee of the PCP in 1936 at the age of 24. His first arrest occurred in 1937.

While in prison, Cunhal submitted his final thesis on the topic of abortion and obtained his law degree (the jury included the future prime minister Marcello Caetano). In the thesis, he also supported the illegality of abortion in USSR, claiming it was no longer practised there. He then taught for some months at the Colégio Moderno, in Lisbon. Among his pupils was the future President of Portugal, Mário Soares, who would be one of his great political rivals after the coup of 1974. 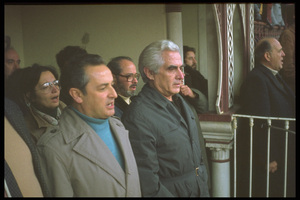 From 1941 to 1949 Cunhal was underground and became the de facto leader of the PCP. Arrested in 1949, he remained in prison until he made a spectacular escape from the Peniche prison in 1960. This escape had a wide impact. The government of António Salazar claimed that a Soviet submarine was near the Peniche coast waiting for Cunhal. In 1961, he was elected secretary-general of the PCP, following the death of Bento Gonçalves in the political prisoners colony of Tarrafal in Cape Verde. Cunhal lived in exile in Moscow, where his daughter by Isaura Maria Moreira named Ana Cunhal was born on December 25, 1960, now married with three sons, and Paris until the Carnation Revolution of April 1974.

Back in Portugal, Cunhal took charge of the newly legalised PCP and led the party through the political upheavals which followed the revolution. He was minister without portfolio in several of the provisional governments which followed the revolution. A faction of army officers seen as aligned with the PCP dominated the post-revolutionary provisional governments, with pro-communist prime-minister Vasco Gonçalves, leading four provisional governments, leading to accusations that the PCP was attempting to take power via the military. Cunhal, was largely responsible for the PCP's hardline attitude, particularly its hostility towards the Portuguese Socialist Party led by Soares, which prevented the formation of a united left.

Cunhal left his office in 1992, being succeeded by Carlos Carvalhas. Nevertheless, his voice remained important in the following years, and he consistently sided with the most orthodox wing of the PCP. He also revealed that under the pseudonym Manuel Tiago he had been the author of several neo-realistic novels. His drawings, made while in prison, were published, revealing his sensibility for the arts, as was also shown by his translation of King Lear by Shakespeare (edited in his last years, and originally written under the female pseudonym Maria Manuela Serpa).

Álvaro Cunhal died in Lisbon in 2005, after several years away from public eye. His funeral, on June 15, took place in Lisbon and was attended by about 500,000 people.[citation needed]

His only remaining sister Maria Eugénia Barreirinhas Cunhal (b. Lisbon, January 17, 1927) has also been for her entire life a militant of the PCP. She married in Lisbon on May 21, 1949 medical doctor Fernando Manuel da Rocha de Medina (Lisbon, March 15, 1924 – Lisbon, September 9, 1965), half-cousin of Ambassador Rui Eduardo Barbosa de Medina, and has four children. 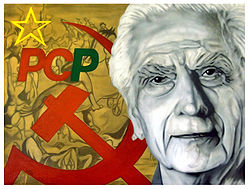