"Ä" and "ä" are both characters that represent either a letter from several extended Latin alphabets, or the letter A with an umlaut mark or diaeresis. 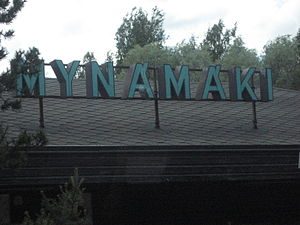 The sign at the bus station of the Finnish town Mynämäki, illustrating an artistic variation of the letter Ä. 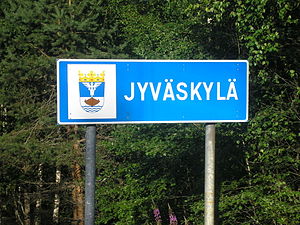 The letter Ä occurs as an independent letter in the Swedish, Finnish, Skolt Sami, Karelian, Estonian, Luxembourgish, North Frisian, Saterlandic, Emiliano-Romagnolo, Rotuman, French, Slovak, Tatar, Gagauz, and Turkmen alphabets, where it represents a vowel sound. In Finnish and Turkmen this is always /æ/; in Swedish and Estonian, regional variation, as well as the letter's position in a word, allows for either [æ] and [ɛ]. In German and Slovak Ä stands for [ɛ] (or a bit archaic but still correct [æ]).

In the Nordic countries, the vowel sound [æ] was originally written as "Æ" when Christianisation caused the former Vikings to replace the Runic alphabet with the Latin alphabet around A.D. 1100. The letter Ä arose in German and later in Swedish from originally writing the E in AE on top of the A, which with time became simplified as two dots. In the Icelandic, Faroese, Danish and Norwegian alphabets, "Æ" is still used instead of Ä.

Finnish later adopted the Swedish alphabet during the 700 years that Finland was part of Sweden. Although the phenomenon of Germanic umlaut does not exist in Finnish, the phoneme /æ/ does. Estonian gained the letter through high and extensive exposure to Germanic languages with Swedish in-particular during the 160 years of Estonia as an occupied, later integrated part of the Swedish Empire.

The letter is used in some Romani alphabets as well.

Main article: A with diaeresis (Cyrillic)

Ӓ is used in some alphabets invented in the 19th century which are based on the Cyrillic script. These include Mari, Altay[citation needed] and the Keräşen Tatar alphabet.

A similar glyph, A with umlaut, appears in the German alphabet. It represents the umlauted form of a, resulting in [ɛ] (or [e] for many speakers). In German, it is however called "Ä" (pronounced [ɛ]) or "A-Umlaut", which may be ambiguous, as it also refers to "Germanic a-mutation". With respect to diphthongs, Ä behaves as an E, e.g. Bäume /bɔɪmə/ (Engl.: trees). In German dictionaries, the letter is collated together with A, while in German phonebooks the letter is collated as AE. The letter also occurs in some languages which have adopted German names or spellings, but is not a part of these languages' alphabets. It has recently been introduced in revivalist Ulster-Scots writing.

The letter was originally an A with a lowercase e on top, which was later stylized to two dots.

In other languages that do not have the letter as part of the regular alphabet or in limited character sets such as US-ASCII, Ä is frequently replaced with the two-letter combination "Ae".

Johann Martin Schleyer proposed an alternate form for Ä in Volapük but it was rarely used. Its uppercase form resembled a Cyrillic я (ya).

Æ, a highly similar ligature evolving from the same origin as Ä, evolved in the Icelandic, Danish and Norwegian alphabets. The Æ ligature was also common in Old English, but had largely disappeared in Middle English.

In modern typography there was insufficient space on typewriters and later computer keyboards to allow for both A-diaeresis (also representing Ä) and A-umlaut. Since they looked near-identical the two glyphs were combined, which was also done in computer character encodings such as ISO 8859-1. As a result there was no way to differentiate between the different characters. Unicode theoretically provides a solution, but recommends it only for highly specialized applications.[1]

Ä is also used to represent the ə (the schwa sign) in situations where the glyph is unavailable, as used in the Tatar and Azeri languages. Turkmen started to use Ä officially instead of schwa.