The Çoruh River (Turkish: Çoruh, Georgian: ჭოროხი ch'orokhi, Greek: Άκαμψις, Akampsis Armenian "Ճորոխ"- (Tchorokh)) rises in the Mescit Mountains in north-eastern Turkey, flows through the cities of Bayburt, Ispir, Yusufeli, and Artvin, along the Kelkit-Çoruh Fault, before flowing into Georgia, where it reaches the Black Sea just south of Batumi and a few kilometers north of the Turkish-Georgian border.

In Arrian's Periplus Ponti Euxini, it is called the Άκαμψις Acampsis; Pliny may have confused it with the Bathys.[2] In English, it was formerly known as the Boas, the Churuk, or the Chorokh.[3][4]

The Çoruh valley lies within the Caucasus ecological zone, which is considered by the World Wild Fund for Nature and by Conservation International as a biodiversity hotspot.[5][6] The Çoruh Valley is recognised by Turkish conservation organisations as an important plant area,[7] an important bird area,[8] a key biodiversity area[9] and has been nominated as a high priority area for protection. This valley is rich in plants and contains 104 nationally threatened plant species of which 67 are endemic to Turkey.[7]

The Çoruh has been called "an eco-tourism gem" and "Turkey's last remaining wild river", and is being promoted for whitewater kayaking by the Eastern Anatolia Tourism Development Project.[10] It attracts kayakers and rafters from all over the world and was the site of the 2005 Coruh Extreme kayak competition.[11] 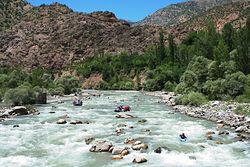