Łódź Voivodeship (also known as Łódź Province,[1] or by its Polish name of województwo łódzkie [vɔjɛˈvut͡stfɔ ˈwut͡skʲɛ]) is a province (voivodeship) in central Poland. It was created on 1 January 1999 out of the former Łódź Voivodeship (1975–1999) and the Sieradz, Piotrków Trybunalski and Skierniewice Voivodeships and part of Płock Voivodeship, pursuant to the Polish local government reforms adopted in 1998. The province is named after its capital and largest city, Łódź, pronounced [wut͡ɕ].

The voivodeship contains 44 cities and towns. These are listed below in descending order of population (according to official figures for 2006):[2] 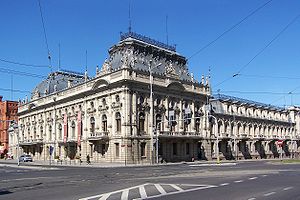 Łódź Voivodeship is divided into 24 counties (powiats): 3 city counties and 21 land counties. These are further divided into 177 gminas.

The counties are listed in the following table (ordering within categories is by decreasing population).

Protected areas in Łódź Voivodeship include seven Landscape Parks, as listed below.

The capital of the Łódź Voivodeship has always been Łódź, but the area of land which it comprises has changed several times. The first was a unit of administrative division and local government in the Second Polish Republic in the years 1921–1939. In 1938 some western counties were ceded to Greater Poland Voivodeship (see: Territorial changes of Polish Voivodeships on April 1, 1938).

The largest cities of the Voivodeship were (population according to the 1931 census):

The next incarnation existed from 1945 until 1975 (although the city of Łódź was excluded as a separate City Voivodeship). This Łódź Voivodeship was then broken up, superseded by Łódź (see below), Sieradz, Piotrków Trybunalski, Skierniewice and partly Płock Voivodeships.

Łódź Voivodeship, also known as Łódź Metropolitan Voivodeship (województwo miejskie łódzkie), existed from 1975 until 1998, after which it was incorporated into today's Łódź Voivodeship. Until 1990, the mayor of the city of Łódź was also the voivodeship governor.

As of 1995, major cities and towns in Łódź Metropolitan Voivodeship included (with their 1995 populations):

The basic cultural activities in the Łódź Region are: monitoring activities of seven regional self-government cultural institutions, i.e.: the Arthur Rubinstein Łódź Philharmonic, Museum of Art in Łódź (having one of the biggest modern art collections in Europe), the Opera House, Stefan Jaracz Theater, the Museum of Archeology and Ethnography, The Józef Piłsudski Regional and Municipal Public Library in Lodz, the Chamber of Culture in Łódź but also: supporting NGO’s, protection of monuments, awarding scholarships to young artists and rewards for the prominent artists. What is more, infrastructural projects are being undertaken. Among the most important investments are: the creation of four regional scenes in Stefan Jaracz Theatre, opening the new section of the Museum of Art in Lodz - ms² or the reconstruction of medieval settlement in Tum in the vicinity of Łęczyca. The major universities in Łódź Voivodeship are:

There are also dozens of other schools and academies, but for the last four years the best students in Łódź Voivodeship (according to the prestigious contest "Studencki Nobel") have been studying at the University of Łódź - in 2009 the regional laureate was Piotr Pawlikowski, in 2010 - Joanna Dziuba, in 2011 and 2012 - Paweł Rogaliński.[3][4]

The excellent scientific staff of the higher education establishments in Łódź is complemented by Łódź’s scientists from the Institute of the Polish Academy of Sciences (PAN) and scientific ministerial institutes working within the field of the occupational medicine, textile, paper and leather industries. The number of students in the higher education establishments in Łódź is still growing. Currently, they educate 113,000 students from Poland and other countries.