Łachwa (or Lakhva) Ghetto was a World War II ghetto created on 1 April 1942 by Nazi Germany in the town of Łachwa in occupied Poland (now Lakhva, Belarus), with the aim of persecution, terror and exploitation of the local Jews. The ghetto existed only until September. It was the location of one of the first,[1] and possibly the first,[2][3] Jewish ghetto uprising after the Nazi–Soviet Invasion of Poland.

Establishment of the ghetto

The German army entered the Soviet occupation zone on 22 June 1941 under the codename Operation Barbarossa and two weeks later, on 8 July 1941, overran the town of Łachwa, located in the Polesie Voivodeship of the Second Polish Republic before 1939.[4] Many young Jews escaped with the Red Army.[5] A Judenrat was established, headed by a former Zionist leader, Dov Lopatyn.[1] Rabbi Hayyim Zalman Osherowitz was arrested by the Germans. His release was secured later only after the payment of a large ransom.[6]

On 1 April 1942, the town's Jews were forcibly moved into a new ghetto consisting of two streets and 45 houses, and surrounded by a barbed wire fence.[3][4] The ghetto housed roughly 2,350 people, which amounted to approximately 1 square metre (11 sq ft) for every resident.[6] 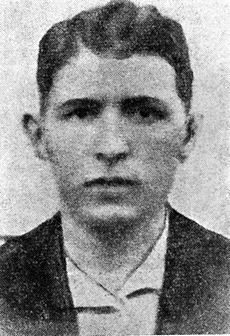 The news of massacres, committed throughout the region by German Einsatzkommandos, soon spread to Łachwa. The Jewish youth organized an underground resistance under the leadership of Isaac Rochczyn (also spelled Yitzhak Rochzyn or Icchak Rokchin), the head of the local Betar group. With the assistance of Judenrat, the underground managed to stockpile axes, knives, and iron bars, although efforts to secure firearms were largely unsuccessful.[3][4][6]

By August 1942, the Jews in Łachwa knew that the nearby ghettos in Łuniniec (Luninets) and Mikaszewicze (now Mikashevichy, Belarus) had been liquidated. On 2 September 1942, the local populace were informed that some farmers, summoned by the Nazis, had been ordered to dig large pits just outside the town. Later that day, 150 German soldiers from an Einsatzgruppe mobile killing squad with 200 local auxiliaries surrounded the ghetto. Rochczyn and the underground wanted to attack the ghetto fence at midnight to allow the population to flee, but others refused to abandon the elderly and children. Lopatyn asked that the attack be postponed until the morning.[4][6][7][8]

On 3 September 1942, the Germans informed Dov Lopatyn that the ghetto was to be liquidated, and ordered the ghetto inhabitants to gather for "deportation". To secure the cooperation of the ghetto's leaders, the Germans promised that the members of Judenrat, the ghetto doctor and 30 labourers (whom Lopatyn could choose personally) would be spared. Lopatyn refused the offer, reportedly responding: "Either we all live, or we all die."[3][4][6]

When the Germans entered the ghetto, Lopatyn set fire to the Judenrat headquarters, which was the signal to commence the uprising.[1] Other buildings were also set on fire. Members of the Ghetto underground attacked the Germans as they entered the ghetto, using axes, sticks, molotov cocktails and their bare hands. This battle is believed to represent the first ghetto uprising of the war. Approximately 650 Jews were killed in the fighting or in the flames, with another 500 or so taken to the pits and shot. Six German soldiers and eight German and Ukrainian (or Belarusian) policemen were also killed. The ghetto fence was breached and approximately 1,000 Jews were able to escape, of whom about 600 were able to take refuge in the Prypeć (Pripet) Marshes. Rochczyn was shot and killed as he jumped into the Smierc River, after killing a German soldier with an axe to the head. Although an estimated 120 of the escapees were able to join partisan units, most of the others were eventually tracked down and killed. Approximately 90 residents of the ghetto survived the war.[3] Dov Lopatyn joined a communist partisan unit and was killed on 21 February 1944 by a landmine. Lakhva was liberated by the Red Army in July 1944.[4]