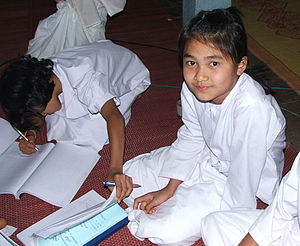 A young Buddhist nun in Thailand 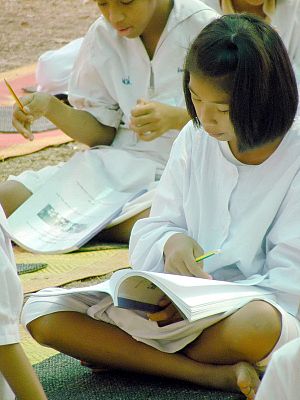 The word śrāmaṇerī is the feminine form of śrāmaṇera, which literally means "lesser śramaṇa".

A woman is to be ordained, according to the traditional vinayas, by both a monk and a nun, first as a śrāmaṇerī. Śrāmaṇeras and śrāmaṇerīs keep the Ten Precepts as their code of behaviour, and are devoted to the Buddhist religious life during a break from secular schooling, or in conjunction with it if devoted to formal ordination.

The Ten Precepts upheld by śrāmaṇerīs are:

After a year or at the age of 20, she will be ordained as a full bhikṣuṇī (Pali: bhikkhuni).