listen) (French and German: Sagan, Upper Sorbian: Zahań, Czech: Zaháň, Latin: Saganum) is a town on the Bóbr river in western Poland, with 26,253 inhabitants (2010). The town is the capital of Żagań County in the historic region of Silesia. Previously in the Zielona Góra Voivodeship (1975–1998), Żagań has been in the Lubusz Voivodeship since 1999. Before 1945 it was part of Germany.

The town's name probably means "place of the burnt forest" (pol. żegać, żagiew): probably referring to the burning of primaeval forest by early settlers. If this is correct, it is consistent with the names of nearby places: Żary, Zgorzelec, Pożarów.[2]

Żagań is located roughly halfway between Cottbus and Wroclaw/Breslau, approximately 100 meters above sea level and at the centre of the Żagań administrative district. It is approximately 100 km (62 mi) north of the Polish frontier with the former Czechoslovakia (now the Czech republic), and since the most recent reconfiguration of the frontiers has been located approximately 40 km (25 mi) to the east of the Polish frontier with Germany (formerly East Germany). The rural district of Żagań surrounds the town on its northern, eastern and southern sides. Iłowa lies to the south-west and the rural district of Żary is to the north-west. The Rivers Bóbr and Kwisa meet up just outside the town on its south-eastern side.

Żagań, first mentioned in a 1202 deed, then belonged the Duchy of Lower Silesia at Wrocław under the rule of the Piast duke Henry I the Bearded. In 1251 it was part of the newly created Duchy of Głogów under Henry's grandson Konrad I. After Konrad's death in 1274, his heirs again divided the duchy and the castle of Żagań became the residence of his youngest son Przemko of Ścinawa, Duke of Żagań from 1278, who established a monastery of the Augustinian Canons here. Thus the Duchy of Żagań came into the existence. In 1284 he swapped his estates for the Duchy of Ścinawa and was succeeded by his elder brother Konrad II the Hunchback. When Konrad II died in 1304, all the former Głogów estates were reunified under his surviving brother Henry III.

In 1309 Henry III of Głogów was succeeded by his eldest son Henry IV the Faithful, who in 1321 again had to divide the duchy with his younger brothers. He ceded Głogów to Przemko II and retired to Żagań, which again became the capital of a duchy in its own right. In 1329 all the sons of Henry III of Głogów became vassals of John of Luxembourg, the King of Bohemia - with the exception of Przemko II who died suddenly two years later. When in 1393 Henry VI the Older, grandson of Henry IV, died without issue, the estates were again reunified with Głogów until in 1412 Jan I, the eldest son of Duke Henry VIII the Sparrow, became the sole ruler of the Żagań duchy. After a fierce battle for the inheritance, his son Jan II the Mad finally sold it to Duke Albert III of Saxony from the House of Wettin, thus ending the centuries-long Piast rule. 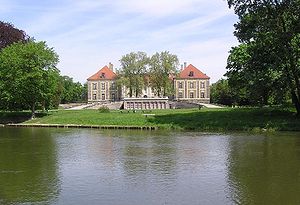 In 1549 Elector Maurice of Saxony ceded Żagań to the Bohemian king Ferdinand I of Habsburg. Emperor Ferdinand II of Habsburg allotted the fief to Albrecht von Wallenstein, his supreme commander in the Thirty Years' War in 1627. It then passed to the illustrious Bohemian family of Lobkowicz, who had the Baroque Żagań Palace erected. After the First Silesian War of 1742, Żagań became part of the Prussia.

In 1786 the fief was purchased by Peter von Biron, Duke of Courland, and in 1843 it passed to his daughter Dorothea, the wife of Edmond de Talleyrand, a nephew of the great French diplomat Talleyrand, who spent her retirement years at Żagań. A patent of King Frederick William IV of Prussia on 6 January 1845 invested her as Duchess of Sagan; and Napoleon III recognized the title in France, in favour of her son Louis. The double title (a prince and a duc) both Prussian and French, served to render the duc de Sagan a neutral party in World War II: his Château de Valençay provided a safe haven for treasures of the Louvre during the German occupation of France.

Żagań was occupied by Soviet troops during the third week of February 1945, following several days of savage fighting. After World War II, the town was transferred from Germany to Poland along with the rest of Silesia under terms previously agreed between the winning wartime powers. The war formally ended in May 1945. During 1945 and 1946 the German population either fled ahead of the Red Army or was expelled. The town was repopulated with Poles many of whom had themselves been expelled from territories that had been transferred from Poland to the Soviet Union.[3][4] as part of the same deal between the allies.

Clearing the rubble began in 1947, and was followed by the establishment of small enterprises, factories and schools. During the 1970s a "new town" quarter was built, and by 1983 the historic baronial château ("Żagań Palace") had been fully rebuilt.[5]

As early as 1939, soon after invading Poland, Nazi Germany established a system of notorious Prisoner of War camps in Żagań. In total, the Mannschafts-Stammlager Stalag VIIIC and its subsidiaries held over 300,000 prisoners from some 30 different countries. It is estimated that around 120,000 of them died of hunger, disease and maltreatment. Later, in 1942, an additional camp was set up for Allied pilots, called Stalag Luft III.[3] 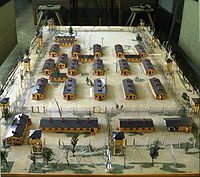 Model of Stalag Luft III at the Żagań Historical Museum

In March 1942, the town became the location of the Stalag Luft III camp for captured airmen (Kriegsgefangenen Stammlager der Luftwaffe 3 Sagan).[4] It was the site of the most courageous escape resulting in the killing of 50 prisoners including the following Polish flight officers: Major Antoni Kiewnarski; Lieutenant Stanislaw Krol; and navigation Lieutenants Włodzimierz Kolanowski, Jerzy Mondschein, Kazimierz Pawluk and Paweł Tobolski. This episode of history was the subject of the 1963 film The Great Escape, starring Steve McQueen. It was the biggest and the most deadly escape of officer aircrew captured by Nazi Germany during the entire World War II. The number of prisoners attempting the escape was 200, of whom 76 managed to leave the camp; 73 were caught and 50 executed on Hitler's orders. Just three successfully escaped, one to Gibraltar and two to Sweden.[4] All three re-united in England.

There were only a few other, similar escapes from German PoW camps in World War II. A slightly smaller one on March 6, 1943 from the oflag in Szubin, involving 43 British officers. On September 19–20, 1943, an escape from the Oflag VI B in Doessel near Wartburg involved 47 Polish officers. A day later 67 French officers escaped from Edelbach in Austria 67. Another involved 54 French soldiers on December 18, 1943, from Marlag near Hamburg. 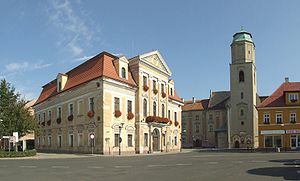 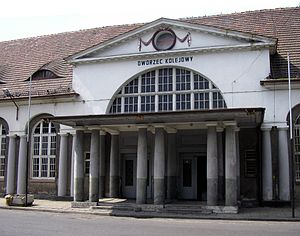 Żagań is home to sports' clubs

Żagań is twinned with: