1+1 (Ukrainian: Один плюс один, Оdyn plyus odyn (One Plus One)) is a national Ukrainian-language TV channel with a technical penetration of 95%. Its target audience is 18–54 years old.

1+1 TV channel was founded in August 1995, headed by its original President Alexander Rodnyansky who also was its general director from 1996 to 2002.[1] In 2002 he joined STS Media and since 2004 he has been the president of that Delaware-registered Russian company.

It immediately became a major force in the Ukrainian TV industry, even though in the very beginning the channel's programming consisted solely of movie broadcasts. Its first broadcast was within two months of its founding, in September 1995, and since 1997 has been broadcasting continuously on the second channel of the Ukrainian national TV network UT-2 (Ukrainian: Другий загальнонаціональний канал (УТ-2), liter.: "Druhyj zagalnonatsionalnyj Kanal"), with an appropriate license of the Ukrainian National Television and Radio Council.

From the start, the channel was very successful, despite its initial limited programming. Until 2004 1+1 broadcast only for 15 hours. Its program schedule was from 7 AM until 10 AM, followed by a break for four hours, and then from 2 PM until 2AM. Beginning on 30 June 2004 the channel was given official permission to broadcast 24 hours each day. Since then, 1+1 has been able to create a complete round-the-clock broadcast schedule. 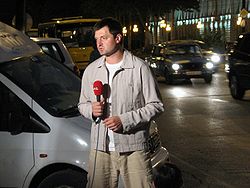 1+1 was the first TV project in Ukraine to start actively inviting popular TV stars and other celebrities to take part in their live shows.[citation needed] The following is a list of programmes currently being offered to 1+1 viewers:

TSN
Television Service of News (TSN) is a news service programme, which has been operating on the channel from the start, and even its presenters have mainly remained the same. Such names as Ala Mazur (on TSN since January 3, 1997; in 1996, 1998, 1999, and 2001 was awarded the best news presenter of the year), Ljudmyla Dobrovolska, Oles Tereshenko and some others are very familiar to those who live in Ukraine, and according to the research, these people have the highest level of trust among news viewers.[citation needed] The TSN series air daily at 7:30 pm except Saturday. Oles Tereshenko leads the concluding TSN series of a day at 00:00 and a week as well every Sunday at 7:30 pm with the overview of political, social, and cultural life of Ukraine and the world.

Due to the high level of professionalism that the TSN has been providing for years, CNN offered 1+1 to take a part in its live broadcasting and now TSN especially is taking part in the news on CNN International in the project "World report".[citation needed]

No Taboo
Created in September 2000 by Olga Gerasymiuk and Andriy Nesterenko, this programme has become unique in the way that it films real people who offer the presenters to show the incredible stories of their lives on TV. People come to the studio, get filmed in front of the live audience, and tell their stories in public. "No taboo" means that there are no prohibitions on the topics, emotions, feelings or support. The main achievement of the programme is that the author Olga Gerasymiuk has been getting positive feedback from the participants for years.

Cinema Document and Cinema Document Plus
This is an intellectual show, that consists of two parts. In the first one the leading persons Yuri Makarov and Anatoli Yarioma invite to their studio people who are well known nationally in culture, art, and history, and conduct conversations including live phone calls with questions from the screen audience. In the second part of the programme they show a Ukrainian documentary movie, which has an actual connection to the present day.

I Think So
This TV challenge is for the strongly opinionated only. Ana Bezulyk is the presenter and the creator of this programme. It started at the time of the Presidential election in Ukraine in 2004 and originally was meant to carry a political ring. Various political leaders were invited to the studio as opponents to each other without any preparation or knowledge of the programme's topics.With the help of the live and phone audience they were led into the discussions considering their various point of view and perspectives in the society. But since the end of elections, I Think So has never stopped.

Breakfast with 1+1 and Breakfast Plus
Working actively since 2002, Breakfast is the early morning programme, offering viewers a way to spend the morning with lots of fun. Its schedule always consisted of bright songs, cartoons, and news series, as well as interesting guests in the studio. Originally, it was the Monday to Friday Breakfast, but since 2006 a weekend breakfast has been "cooked" as well, adding such activities to its "menu" as "Fitness", "Fashion Stuffs", "Relax!", and "Don't sleep and travel". The programme offers an interactive area on its website.

Along with sponsoring of various public and cultural projects, 1+1 takes part in filming as well. The channel and its employees have a big list of filmed movies, that have had a great success in Ukraine, Russia, Belarus, and Poland. These movies includes

The brand of the channel has become a traditional sign of quality in Ukrainian TV industry. The company's work and separate presenters have been recognized and highly evaluated not only by national specialists and experts in TV production, but also by many international experts and at TV forums.

In 1999, after 1+1 had been broadcasting on UT-2 24h per day for two years with an appropriate license, the channel sent a claim to the Supreme Court of Ukraine requesting the TV company AITI, who used to hire UT-2 9h broadcasting time earlier before, to give up its license as it had stopped its programming for a year. In the year 2000 the claim was decided for the 1+1 preference.

Channel 1+1 has been the subject of continuing criticism during the 2004 presidential election, when it was heavily criticized for twisting information in favor of Viktor Yanukovych (Prime Minister of Ukraine at the time). Such behavior was typical for a Ukrainian-wide channel, because all of the media were under heavy pressure from the Administration of the President of President Kuchma. Furthermore, critics accused the channel of being part of the Social Democratic Party of Ukraine empire.[2][3]

In late November 2004 several journalists left the channel in protest against this pressure and almost all leading presenters had refused to report news. Those actions altogether with similar actions on other channels marked the beginning of the Orange revolution.

In October 2006 Alexander Rodnyansky, the General Producer of Studio 1+1, won a hard appeal process in the Supreme Court of Ukraine, after the court gave ownership of 70% of the company's shares to Mr. O. Kolomyyskyy, as he had claimed, that in June 2005 there was an agreement signed between himself and Rodnyansky, that 70% of the company's shares were sold to Kolomyyskyy (for ~70 million USD).

On the New Year night the 80th Disco TV program was shown on 1+1. Oleg Gazmanov participated in it. He is one of the signatories of the petition in support of Russian actions in Crimea and Ukraine in 2014. That caused a scandal in Ukrainian society. The National Council on Television and Radio of Ukraine promised to review all facts of violation of broadcast regulations by Ukrainian TV and radio companies on the New Year night.[4]