1. FC Lokomotive Leipzig is a German football club based in the city of Leipzig in Saxony and may be more familiar to many of the country's football fans as the historic side VfB Leipzig, the first national champions of Germany. The team won the 2015-16 NOFV-Oberliga Süd and qualified for the 2016–17 Regionalliga Nordost, where it will face former East German champions FC Carl Zeiss Jena and BFC Dynamo.

The club was formed on 26 May 1896 out of the football department of gymnastics club Allgemeine Turnverein 1845 Leipzig. However, they lay claim to an earlier date of origin by reaching back to a club that was incorporated into VfB in 1898 – Sport Club Sportbrüder Leipzig – which was one of four football clubs formed in Leipzig in 1893. The union lasted until 2 May 1900 when the two sides went their separate ways again.

VfB Leipzig was one of the original eighty-six teams that came together in the city in 1900 to form the German Football Association (Deutscher Fußball Bund). They were immediately successful at their chosen sport and made their way to the first German national championship final held in 1903. Their opponents were DFC Prag, an ethnically German side from Prague, which was then part of Austria-Hungary. The DFB had invited "German" clubs of this sort from other countries in order to boost numbers in their new national association.

DFC Prag had made their way to the final under circumstances that had allowed them to avoid playing a single playoff game, while VfB Leipzig had come through some hard fought matches. Arriving in Hamburg for the match, the heavily favoured Pragers took themselves off on an ill-advised pub crawl the night before the contest and so arrived to the pitch in less than ideal game-shape. The contest against was delayed half an hour as officials scrambled to find a football that was in good condition. The host, FC 93 Altona Hamburg, provided a new ball and eleven minutes in, DFC Prag scored the first goal. At the end of the first half, the score stood at 1:1, but VfB Leipzig then pulled away to emerge as the first winners of the Viktoria Meisterschaftstrophäe (Victoria Championship Trophy), representative of German football supremacy, on the strength of a decisive 7–2 victory.

Leipzig played themselves into another final appearance in 1904, but the match was never contested. A protest by FV Karlsruhe over their disputed semi-final with Britannia Berlin was never resolved and the DFB called off the final only hours before its scheduled start. There would be no champion that year. The following season Leipzig found themselves unable to cover the expense of travelling to participate in their scheduled first round playoff match and so were eliminated from that year's competition. They did, however, go on to raise the Viktoria again in 1906 and 1913 and also played in the 1911 and 1914 finals.

In the period leading up to World War II, VfB was unable to repeat their early success. After the re-organization of German football leagues under the Third Reich in 1933, the club found itself in Gauliga Sachsen, one of sixteen upper tier divisions. While they earned good results within their own division, they were unable to advance in the playoff rounds. In 1937, they captured the Tschammerpokal, known today as the German Cup, in a match against FC Schalke 04, the dominant side of the era. 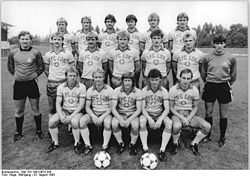 The club, like most other organizations in Germany, including sports and football clubs, was dissolved by the occupying Allied authorities in the aftermath of the war. Club members reconstituted the team in 1946 as SG Probstheida under the auspices of the occupying Soviets. After playing as BSG Erich Zeigner Probstheida and then BSG Einheit Ost, the club merged with SC Rotation Leipzig in 1954 and played in the DDR-Oberliga, East Germany's top flight league, but earned only mediocre results. In 1963 Leipzig's two most important clubs – SC Rotation and SC Lokomotive Leipzig – were put together resulting in two new sides being founded – SC Leipzig and BSG Chemie Leipzig. East German football went through a general re-organization in 1965, creating football clubs as centres of high-level football, during which SC Leipzig was transformed into 1. FC Lokomotive Leipzig, while rivals Chemie Leipzig continued as a Betriebssportgemeinschaft (BSG), or a company team. Playing as Lokomotive, the club's fortunes improved somewhat as they almost always finished well up the league table, but they were unable to capture the top honour in the DDR (German: Deutsche Demokratische Republik or German Democratic Republic) with losing final appearances in 1967, 1986, and 1988.

Re-unification in 1990 was followed by the merger of the football leagues of the two Germanys a year later. A poor season led to a seventh-place finish in the transitional league, but an unexpectedly strong playoff propelled the club into the 2. Bundesliga.

1. FC Lokomotive made a grasp at their former glory by re-claiming the name VfB Leipzig. A third-place finish in 1993 advanced the team to the top flight Bundesliga where they finished dead-last in the 1994 season. The new VfB began a steady slide down through the 2. Bundesliga into the Regionalliga Nordost (III) by 1998 and then further still to the NOFV-Oberliga Süd (IV) by 2001. They were bankrupted in 2004, their results were annulled and the club was dissolved.

In 2004, the club was re-established by a group of fans as 1. FC Lokomotive Leipzig. The renewed side had to start in the lowest league eleventh-tier 3. Kreisklasse, Staffel 2 in 2004–05. Even so, they continued to receive solidly enthusiastic fan support: their game against Eintracht Großdeuben's second team in the Leipzig Zentralstadion on 9 October 2004 broke the world record for lower-league attendance with an astounding 12,421 spectators in the stands. Thanks to a merger with SSV Torgau, the club could play in the seventh-tier Bezirksklasse Leipzig, Staffel 2 in 2005–06. Finishing this league as champions, the team qualified for the sixth-tier Bezirksliga. In 2006 Lok Leipzig also played a friendly match vs. FC United of Manchester (4–4) and qualified for the Landespokal 2006–07 by winning the Bezirkspokal. Lokomotive Leipzig finished as champions of their group and promoted to fifth-tier Landesliga Sachsen Group for 2007–08 season. The club finished 2nd to FC Erzgebirge Aue II and missed out on direct promotion to NOFV-Oberliga Süd by 2 points in 2007–08 season. It still had the chance to regain Oberliga status through a relegation play-off with FC Schönberg 95, winning game one 2–1 at Schönberg. In the return leg, in front of almost 10,000 spectators, the club lost 0–1 but still gained Oberliga promotion on the away-goal rule.[1] Lokomotive Leipzig finished Oberliga as third in 2008–09, as 12th in the 2009–10 and as 8th in the 2010–11 seasons. Lokomotive Leipzig was promoted to Regionalliga Nordost after finishing Oberliga as sixth due to reserve teams of FC Rot-Weiß Erfurt, Dynamo Dresden and FC Carl Zeiss Jena being ineligible for promotion. Lokomotive finished as tenth in the 2012–13 season but was relegated to Oberliga Nordost after finishing as 15th in the 2013–14 season.[2][3]

The club stayed in contention for promotion back up to the Regionalliga during the 2014–15 season, having hired former German international Mario Basler as director of sports in early 2015. In the final game of the season Lok supporters stormed the field after their team had fallen behind 2–0, forcing the game to be abandoned and the club to finish outside of the promotion ranks.[4] Finally the club reached the first place in the South Group of the NOFV-Oberliga and returned to Regionalliga Nordost for the 2015–16 season.

Records (since re-establishment on 10 December 2003)