The 100 mm field gun M1944 (BS-3) (Russian: 100-мм полевая пушка обр. 1944 г. (БС-3)) was a Soviet 100 mm anti-tank and field gun. The gun was successfully employed in the late stages of World War II, and remained in service into the 1950s, being replaced in Soviet service by the T-12 antitank gun and the 85 mm antitank gun D-48 in 1955. The BS-3 was also sold to a number of other countries and in some of these countries the gun is still in service. A number of BS-3 pieces are still stored in Russian Army arsenals. Also at least 12 BS-3 cannons are active in 18th Machinegun & Artillery Division, located on the Kuril Islands, used as anti-ship and anti-landing guns (2012).

The gun was employed by light artillery brigades of tank armies (20 pieces along with 48 ZiS-3) and by corps artillery. 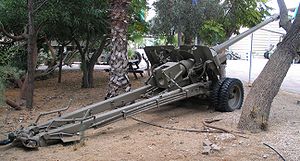 In the Second World War the BS-3 was successfully used as a powerful anti-tank gun. It was capable of defeating any contemporary tank at long range, excluding the Tiger Ausf B: to destroy that heavy tank the gun needed to shoot at less than 1600 m from the target. The gun was also used as a field gun. Though in this role it was less powerful than the 122 mm A-19, as it fired a smaller round, the BS-3 was more mobile and had a higher rate of fire.