It was activated in mid 1918, too late to join the fighting in World War I. The division is best known for its exploits during World War II as the 100th Infantry Division. Fighting in the European Theater, the division advanced through France and Germany through the end of the war, fending off serious German counterattacks along the way. World War II would be the only war the division would fight in before taking on its role as a training unit.

The division then began preparations to deploy to Europe and join the American Expeditionary Forces in combating the Central Powers during World War I. Before the division could deploy, though, the war ended on 11 November 1918, Armistice Day. The 100th Division then began demobilization as part of the post-war drawdown of the U.S. Army.[5]

It would remain on the U.S. Army's roll until November 1919, when it was completely demobilized. Only two years later, in June 1921, the division was reconstituted with its headquarters in Wheeling, West Virginia.[5] On 29 May 1923, the division received its shoulder sleeve insignia.[3]

The 100th Infantry Division was reactivated in the active duty force on 15 November 1942 at Fort Jackson, South Carolina.[5] Enlisted personnel were primarily original members of the unit, fleshed out by fillers from the 76th Infantry Division. The Officers were mostly members of the unit, again fleshed out with fillers from the Organized Reserves.[7] The commander of the 100th was Major General Withers A. Burress, one of only eleven generals who commanded their divisions for the entire war.[2]

From late 1943 to early 1944, the division trained in the mountains of Tennessee and was subsequently sent to Fort Bragg, North Carolina, for further training.[7] While at Fort Bragg, Technical Sergeant Walter L. Bull earned the first Expert Infantryman's Badge.[7]

As soon as the division was prepared for combat, it began moving into the Meurthe-et-Moselle region,[12] and sent its first elements into combat at St. Remy in the Vosges Mountains on 1 November 1944.[10] The division as a whole began the relief of the 45th Infantry Division at Baccarat on 5 November, and assumed control of the sector on 9 November.[10] The attack jumped off on 12 November, and the division drove against the German Winter Line in the Vosges Mountains.[10] The 100th took Bertrichamps and Clairupt, pierced the German line, and seized Raon-l'Étape and Saint-Blaise-Moyenmoutier between 16 and 26 November.[10] Later in November the division moved into the Vosges region,[12] elements assisted in holding the Saverne Gap bridgehead while the bulk of the division went into reserve.[10] The unit was relieved from assignment to VI Corps and transferred to the US XV Corps on 27 November 1944.[11] It then moved into the Moselle region.[12] 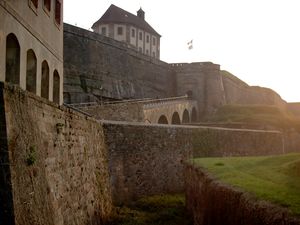 The citadel of Bitche, France

In December 1944, the division went on the offensive in the vicinity of Bitche, France. The division occupied the nearby areas of Wingen and Lemberg after fierce fighting on 6–10 December. The division then advanced to Reyersweiler, which fell after fighting on 11–13 December.[10] Fort Schiesseck, a major defensive work in the region, capitulated after a heavy assault by the 100th on 20 December.[10] The division was ordered to halt its attack and to hold defensive positions south of Bitche as part of the Seventh Army during the Battle of the Bulge.[10] Thanks to a stout defense, the men of the 100th later became known as the "Sons of Bitche". The German counterattacks of 1 and 8–10 January 1945 were repulsed, after heavy fighting at Bitche. After further attacks stalled and the Germans began to withdraw, the sector was generally quiet and the division prepared to resume its offensive east.[10]

On 15 March 1945, the attack jumped off and on 16 March, Bitche fell to the 100th Infantry Division.[10] The unit was then relieved from assignment to XV Corps, and transferred to XXI Corps on 22 March 1945.[11] Taking Neustadt and Ludwigshafen, the division reached the Rhine River on 24 March.[10] On 25 March 1945, the unit was returned from XXI Corps back to VI Corps.[11] On 31 March 1945, the 100th Infantry Division crossed the Rhine and moved south in the wake of the 10th Armored Division and then east across the Neckar River, establishing and enlarging a bridgehead from 4 to 11 April.[10] Heilbronn fell after nine days of house-to-house combat on 12 April and the division resumed its rapid pursuit of the enemy, reaching Stuttgart by 21 April.[10] The 100th was mopping up along the Neckar, southeast of Stuttgart on 23 April, when it was removed from VI Corps and assigned directly to the Seventh United States Army as an Echelon Above Corps Asset.[11] The division was then assigned primarily to patrolling the sector east of Stuttgart.[13] Shifting to Göppingen on 30 April, the Division engaged in occupational duties as the war in Europe came to an end on V-E Day.[13]

The division spent 163 days in combat.[14] During that time, it suffered 12,215 casualties, including 933 killed in action, 3,667 wounded in action, 589 missing in action, 1 prisoner of war, as well as 7,425 non-battle casualties.[14] The division took 13,351 prisoners of war on its own.[14] Members of the division won three Medals of Honor, seven Distinguished Service Crosses, five Legions of Merit, 492 Silver Star Medals, 23 Soldier's Medals, 5,156 Bronze Star Medals, and 90 Air Medals. The division itself was awarded three campaign streamers for participation in the campaign.[14]

100th Infantry Division returned to the United States via the Hampton Roads Port of Embarkation on 10 January 1946, and was released from active duty at Camp Patrick Henry, Virginia that day.[10] The division then began the process of demobilization, before inactivating on 26 January.[5]

In fall of 1946, the division was reactivated in the U.S. Army Reserve as the 100th Airborne Division in Louisville, Kentucky.[5] This distinction as one of the few airborne divisions within the U.S. Army was brief; in 1952 the division was once again redesignated the 100th Infantry Division.[5] It would change names again in 1955, this time to 100th Division (Replacement Training).[5] It would once again be reorganized in 1959 to its present designation as 100th Division (Institutional Training). Its mission became to teach basic, advanced, and common training skills to soldiers from the Army's active, reserve, and National Guard components.[5]

In 1961, some 1,500 soldiers from the 100th were activated and sent to Fort Chaffee, Arkansas,[5] in order to provide support during the Berlin Crisis. During their time on active duty, the 100th successfully trained some 32,000 soldiers after thoroughly rebuilding and fixing the old Army base. The unit was returned to reserve status again in August 1962.[7] In 1968, the division received its distinctive unit insignia, which alluded to its history in World War II and as a Kentucky-based unit.[3]

In 1978, the 100th became the first Army Reserve formation to be equipped with its own squadrons of M1 Abrams tanks. With the arrival of the M3 Bradley infantry fighting vehicles, the division's mission profile changed from individual combat training to armor and armor reconnaissance training.[7] By 1986, it was the largest reserve unit within the state of Kentucky, commanding fifty-eight percent of instate reservists.[7]

Gulf War and beyond

At the outbreak of Operation Desert Storm in 1991, the 100th was assigned to armor training at Fort Knox, Kentucky for deploying armor units. Armor training was a responsibility that the division continued after the war.[7]

During 1997, the division was tasked with partial responsibility for Operation Future Challenge at Fort Knox, a six-week Reserve Officer's Training Corps Basic Camp during each summer. By 2000, the 100th has assumed full responsibility for running the camp. Later that same year, the 100th began deactivating many of its M1A1 Abrams tanks as part of a reduction in military expenditures.[7]

After the September 11 attacks, the 100th Division began taking on the job of preparing Army National Guard units from Ohio and Kentucky as they began to prepare for deployment in support of the War on Terrorism.[7]

By 2006, the division had moved its headquarters from Louisville to Fort Knox, easing distance strains in administration and training.[7] In line with Army Reserve transformations, the 100th Division restructured, eliminating all but four of its brigades. The division shifted its focus from initial entry training to providing military occupational specialty and non-commissioned officer training for four army career fields across the United States. The new 100th Division (Operational Support) teaches soldiers subjects from military intelligence, signal corps, civil affairs/psychological operations and health services.[4]

During the Second World War many units within the division were awarded Distinguished Unit Citations, as well as Meritorious Unit Citations.[5]

The division's legacy in World War II has been honored several times. The Cross Island Parkway in Queens, New York was renamed the "100th Infantry Division Parkway" in 2005 in honor of 2,300 soldiers from New York that served with the division during the war.[17] Three soldiers earned the Medal of Honor serving with the division in World War II. They were Edward A. Silk, Mike Colalillo, and Charles F. Carey, Jr..[18][19] A street in Bitche, France, is named for the 100th Infantry Division.[citation needed]