The 102d Infantry Division ("Ozark"[1]) was a unit of the United States Army in World War II.

Patch was used in 1986 for the Military Police unit stationed at Richards Gebaur AFB near Belton Missouri.

The 102d Infantry Division arrived at Cherbourg, France, 23 September 1944, and, after a short period of training near Valognes, moved to the German-Netherlands border. On 26 October, elements attached to other divisions entered combat and on 3 November the division assumed responsibility for the sector from the Wurm to Waurichen. A realignment of sectors and the return of elements placed the 102d in full control of its units for the first time, 24 November 1944, as it prepared for an attack to the Roer. The attack jumped off, 29 November, and carried the division to the river through Welz, Flossdorf, and Linnich.

After a period of aggressive patrolling along the Roer, 4–19 December, the division took over the XIII Corps sector from the Wurm River, north of the village of Wurm, to Barmen on the south, and trained for river crossing. On 23 February 1945, the 102d attacked across the Roer (→ Operation Grenade), advanced toward Lövenich and Erkelenz, bypassed Mönchengladbach, took Krefeld, 3 March, and reached the Rhine. During March the division was on the defensive along the Rhine, its sector extending from Homburg south to Düsseldorf. Crossing the river on 9 April on pontoon bridge, the division attacked in the Wesergebirge, meeting stiff opposition. After 3 days and nights of terrific enemy resistance Wilsede and Hessisch-Oldendorf fell, 12 April 1945, and the 102d pushed on to the Elbe, meeting little resistance. Breitenfeld fell, 15 April, and the division outposted the Elbe River, 48 miles from Berlin, its advance halted on orders. Storkau experienced fighting on the 16th,EHRA on the 21st along with Fallersleben. On 3 May 1945 the 102nd shook hands with the Russian 156th Division just outside Berlin. 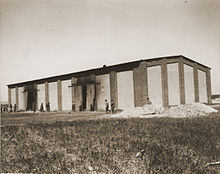 The barn set on fire in the Gardelegen Massacre

On 15 April the division discovered a war crime in Gardelegen. About 1,200 prisoners were herded into the empty barn measuring approximately a hundred by fifty feet on the outskirts of the town. The barn was then burned down, killing those inside. About 1,016 people were killed. However, two men survived, buried under a shield of dead bodies, protecting them from the gunfire and flames. When the first soldiers arrived at the barn, the two came crawling out from under the dead and burning bodies. The division commander ordered that the civilian population be forced to view the site and to disinter and rebury the victims in a new cemetery. After digging the graves and burying the bodies, they erected a cross or a Star of David over each grave and enclosed the site with a white fence.[2]

It patrolled and maintained defensive positions until the end of hostilities in Europe, then moved to Gotha for occupational duty.

Assignments in the European Theater of Operations