The gun was based on an artillery piece originally developed by the French arms manufacturer Schneider prior to World War I and used by the Russian Empire as the 107 mm gun M1910. The modernized variant, adopted in 1931, differed from the original design mainly by having a larger chamber and longer barrel, resulting in longer range. The M1910/30 remained in production until the mid-1930s and was employed by the Red Army in World War II, mainly in corps artillery and Reserve of the Main Command units.

A number of captured guns were used by the Wehrmacht.

From the late 1920s the RKKA sought to upgrade its First World War era artillery pieces. One of the modernized weapons was the 107 mm gun M1910, originally designed by the French arms manufacturer Schneider. Modernization projects were submitted by Orudiyno-Arsenalny Trest (OAT) and by the design bureau of the Scientific and Technical Committee of the Main Directorate of Artillery (KB NTK GAU). After trials it was decided to adopt the weapon designed by KB NTK GAU, but to fit it with an equilibrating mechanism as used in the OAT project. The modernized weapon was adopted in 1931 as the 107 mm gun M1910/30.[1]

The upgrade included the following:[citation needed]

The weapon was manufactured by the Bolshevik Plant in Leningrad and by the Barrikady Plant in Stalingrad from 1931 until 1935 or later.[1] Additionally, a number of M1910 pieces were upgraded by Bolshevik, No 7, No 13 and KKZ plants.[citation needed] 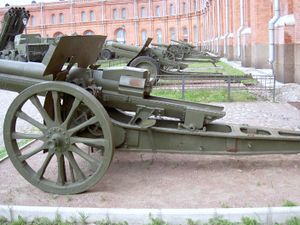 The barrel of the M1910/30 was longer than the original barrel and was fitted with a slotted muzzle brake (which reduced recoil by 25%); in order to balance the barrel, a special weight was fitted to the opposite end of the tube. The breech was of the interrupted screw type. The recoil system, consisting of a hydraulic recoil buffer and a hydropneumatic recuperator, was located in a sleigh below the barrel.[citation needed]

The box trail carriage was nearly identical to that of the M1910. It had either unsprung wooden wheels or metal wheels with solid rubber tires. With wooden wheels, the speed of transportation was limited to about 6 km/h. A team of eight horses was needed to tow the gun; another six towed an ammunition box with 42 rounds.[1]

In September 1941 rifle corps of the RKKA were disbanded, therefore corps level artillery ceased to exist. 107 mm guns were then issued to Reserve of the Main Command units, in 12, 18 or 24-piece gun regiments or 36-piece gun brigades.[citation needed]

When corps level was reintroduced in 1943, most 107 mm pieces were again given to corps artillery. New corps artillery regiments had 16-20 pieces and along with 107 mm guns included 122 mm guns and 152 mm howitzers.[2]

Many 107 mm guns were also used by the independent artillery regiments of fortified regions and by independent battalions and batteries belonging to fronts and armies.[citation needed]

A surviving piece can be seen in the Artillery Museum in Saint Petersburg.[citation needed]

A number of M1910/30 guns were captured by the Wehrmacht and pressed into service in both field and coastal artillery. In German service, the gun was designated the 10,7 cm K 352(r). In March 1944, the Wehrmacht still possessed 17 pieces, all on the Eastern Front.[7]

The modernization of the M1910/30 gave the Red Army a relatively lightweight, reliable corps artillery piece with improved range and a wide array of ammunition. On the other side, it failed to address other drawbacks of the weapon. Because of its unsprung wheels, the M1910/30 was unsuitable for high-speed transportation. A very small traverse of 6 degrees limited the effectiveness of the gun against enemy tanks, despite decent armor penetration.[citation needed]

In 1940, the RKKA adopted a more modern 107 mm gun, the M-60. Although originally intended - and officially designated - as a divisional gun, in practice the M-60 was never used by rifle divisions; from 1943 it mainly served in the reintroduced corps artillery. However, soon after the outbreak of war, production of the M-60 was stopped. In 1943 another 107 mm gun, the 9S-1, was developed, but it was never adopted, leaving the M1910/30 the last mass production 107 mm piece in Red Army service.[citation needed]

The gun fired separately loaded, cased charge ammunition. Two different charges – full and reduced – were used. Use of the full charge was prohibited with the muzzle brake removed, or with old high-explosive ammunition, shrapnel and smoke rounds.[citation needed]

The explosion of the OF-420 shell, with the fuse set to the fragmentation action, resulted in damage to 90% of targets in the 6 to 14 meters area and to 50% of targets in a 20 to 42 meter area. When the fuse was set to high-explosive action, the shell made a crater 1–1.5 m in diameter and 40–60 cm deep in an average soil.[citation needed]

The shrapnel shell contained more than 600 bullets and covered an area about 800 m long and 45–50 m wide.[citation needed]