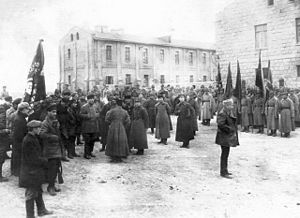 Red Army in Baku, Democratic Republic of Azerbaijan in May 1920 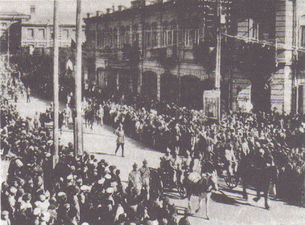 The 11th Red Army marching down a street in Yerevan, the capital of the Democratic Republic of Armenia on November 29, 1920.

The 11th Army (1st formation) of the Red Army was a unit of the then newly created Soviet armed forces. It was formed by the Bolsheviks on October 3, 1918, from the Red Northern Caucasus Army.[2] In February 1919 it was dissolved and was again deployed in March 1919 as a subdivision of the Caspian-Caucasian Front. It took a prominent part in the sovietization of the three republics of the southern Caucasus in 1920–21, when Azerbaijan, Armenia, and Georgia were brought within the orbit of Soviet Russia. In 1939 the 11th Army (2nd formation) was formed in the Belarusian Special Military District (BSMD) from the former Minsk Army Group.

Since the Russian Republic's Caucasus Front dissolved, it did not have a true successor organization. The Army of the North Caucasus, which was renamed 11th Army on October 3, 1918, constituted the main army of the Russian Republic in the area during the Russian Civil War. During the Russian Civil War the 11th Army fought against the White troops of General Anton Denikin's Volunteer Army in the western part of the North Caucasus. It was the main strength of the Caspian-Caucasian Army Group. In January 1919, the front of 200 miles held by the Red troops along the Caucasus foothills and South Russian steppes was cut into two by the White forces, which resulted in the panic flight of the 11th Red Army.[3]

On 27 April 1920 the 11th Army took Baku. The Bolsheviks then established the Democratic Republic of Azerbaijan, as a Soviet republic in May 1920. This was the first country in the South Caucasus that the Bolsheviks seized control of. Taking advantage of its quarrels with neighboring Armenia, the 11th Army had little difficulty in initially sovietizing Azerbaijan. Although it soon was embroiled in a fierce anti-Soviet insurgency, the army remained poised to advance into the two remaining republics, Armenian and Georgia.[4]

For the time being, however, the authorities in Moscow ordered the army to stand down while negotiations between Russia and Armenia were being carried out.[5] In that brief span the Red Army did aid Armenian communists fighting against the Armenian government in the Ijevan region of Armenia.

By 1921, the 11th Red Army is characterized by the modern French historian Marie Broxup as "a purely Russian army led by Russian commanders and Russian political cadres."[6] In May 1921 the army lost its name and was integrated into the Caucasian Front, later part of the North Caucasus Military District.

In 1939 the 11th Army (2nd formation) was formed in the Belarusian Special Military District (BSMD) from the former Minsk Army Group. It took part in the Soviet invasion of Poland (1939). In summer 1940 it became part of the Baltic Military District (from August, 17th, 1940 the Baltic Special military district).

When the Germans invaded in June 1941 the 11th Army comprised the 16th Rifle Corps (which included the 5th, 33rd and 188th Rifle Divisions) and 29th Rifle Corps (179th and 184th Rifle Divisions) and the 3rd Mechanised Corps (640 tanks), the 23rd, 126th and 128th Rifle Divisions, the 42nd (Шауляйский) and 46th Fortified Regions (Тельшайский), and 45th Fortified Regions (УР), and other smaller formations and units. It participated in military operations as part of the Soviet Northwestern Front west and south-western of Kaunas and Vilnius.

Since July 9, 1941, it had under its command the 41st and 22nd Rifle Corps and the 1st Mechanised Corps. On 1 September 1941 its structure included the 180th, 182nd, 183rd, 202nd, and 254th Rifle Divisions, 21st Motor Rifle Regiment, 9 арт. бригада ПТО, 614th Corps Artillery Regiment, 698 ап ПТО, the 87th and 110th Independent Tank Battalions, 7th Mixed Aviation Division, and a number of separate formations.[7] In 1942 and 1943 it participated in attacks against the Wehrmacht near Solzy and Staraya Russa and in operations around the Demyansk Pocket. In summer and fall 1943 it was part of the Western Front. In mid July 1943 the Army comprised the 53rd Rifle Corps, the 4th, 96th, 260th, 273rd and 323rd Rifle Division, the 225th Tank Regiment and other units. From July 30 11th Army joined the Bryansk Front, and fought in the Battle of Kursk. In December 1943 the 11th Army was dissolved, with the personnel being integrated into other Soviet armies.

The commanders of the 11th Army were: