From the late 1920s the Red Army sought to upgrade its First World War era artillery pieces. In January 1927 the Main Artillery Directorate (GRAU) initiated development of a new 122 mm gun for corps artillery. The development was initially entrusted to GRAU design bureau (led by F. F. Lender until its death in September 1927), and from June 1929 - to the design bureau of All-Union Ordnance Trust, with assistance from GRAU designers.[1]

On 17 June 1929 a prototype, along with technological documentation, was ordered from Motovilikha Plants. It underwent trials starting in October 1931, with two barrels of different construction, both fitted with muzzle brake. In May 1932 the gun was sent for improvements to the No 38 Plant, and it received that plant's designation A-19. In 1933, three more prototypes were ordered from the Barrikady Plant in Stalingrad and were completed in March 1935. The gun reached trials again in November 1935. After successfully completing the trials, it was adopted by RKKA on 13 March 1936 as 122 mm corps gun M1931 (A-19).[1]

In contrast with World War I-era guns, the M1931 had split trail carriage, allowing for much wider traverse angle. The carriage was fitted with leaf spring suspension and ten-spoke metal wheels with solid rubber tires. Some late production pieces had ML-20-type wheels with pneumatic tires. The carriage also featured spring-type equlibrator. The shield gave the crew some protection from small arms and shell fragments.

The barrel consisted of liner, jacket and screwed-upon breech. Early production barrels had a built-up construction, but in 1936 these were replaced in production by loose liner barrels. The breechblock was of interrupted screw type, similar in construction to that of the 152 mm howitzer M1910/37. Unlike early prototypes, productional barrels did not have muzzle brake. Recoil system consisted of hydraulic recoil buffer and hydropneumatic recuperator, both located inside the cradle under the barrel.

Initially a separate transportation (with the barrel removed from the carriage and transported on a special wagon) was considered. However, following the trials it was decided to always tow the gun as a single piece. Several types of artillery tractors were employed: S-2 Stalinets-2, Komintern and, from 1943, Ya-12.

Both variants - M1931 and M1931/37 - had the same place in army organizations, were often used alongside each other and combat reports rarely differentiate between them; consequently, the data in this section is for M1931 and M1931/37 together, unless specified otherwise.

The A-19 was originally intended for corps artillery. Together with ML-20 it formed a so-called "corps duplex". In 1940-41 there were three types of corps artillery regiments:

The A-19 was primarily used for indirect fire against enemy personnel, fortifications and key objects in the near rear. It was also equipped with armour-piercing shells for direct fire against armoured targets. Although not an ideal anti-tank gun because of its large size, slow traverse and relatively slow rate of fire, in 1943 the A-19 was one of a few guns effective against new German tanks.

The Finnish Army captured 25 pieces in 1941 and also pressed them into service. The same designation 122 K/31 was applied to both variants. Because of shortage in heavy tractors, the gun was mostly used in coastal artillery. Four pieces were lost; the rest remained in service after the war. During the 1980s some pieces had their barrels replaced with 152 mm barrels of the ML-20; the resulting pieces were designated 152 H 37-31. In the late 1980s all 152 H 37-31 and the remaining 122 K/31 received new 152 mm L/32 barrels manufactured by Vammas, to become 152 H 88-31. Only in 2007 did the Finnish Army begin to remove these guns from service.[8] 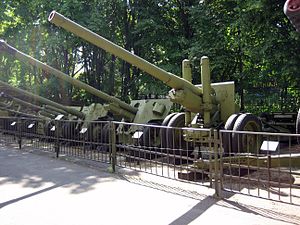 As mentioned above, late production M1931s differed from early production ones. Guns manufactured starting in 1936 had free liner barrel construction in contrast to the earlier built-up barrels; in 1937 changes in breech block construction were introduced, and some late production pieces received ML-20-type wheels with pneumatic tires.

In addition, the M1931 had a number of experimental variants.

In 1933, development of a carriage with improved off-road mobility was started. The carriage in two variants - on tracks and on large, tractor-type wheels - reached trials in 1937 and was found to be not durable enough.[1]

In 1933-36 the gun was involved in experiments with pre-rifled projectiles. For these experiments a special variant of the barrel was produced. The experiments were stopped because of inherent deficients of those projectiles, namely more complicated loading process and lower accuracy.[1]

Another variant, with bag loading, designated Br-3, reached trials in 1937, but was not adopted.[1]

As already mentioned, in Finland carriages of the A-19 were fitted with 152 mm barrels, resulting in two models:

The M1931 was one of the first Soviet artillery pieces to feature split trail carriage. This carriage construction allowed for much better traverse angles compared to earlier single trail or box trail carriages. Good elevation angle and ability to use different propellant charges made the gun flexible indirect fire weapon, and its ballistics were powerful enough to make it useful in direct fire role against enemy armor (though, as mentioned above, it was not an ideal anti-tank gun because of its size, traverse speed and rate of fire).

The carriage of M1931 had a number of shortcomings though. The elevation mechanism was slow and unreliable; solid-tired wheels hindered mobility to some extent; there were technological problems in carriage production.[1] These shortcomings eventually led to adopting a better carriage, creating the M1931/37.

As calibers similar to 122 mm were not typical for western field artillery of World War II era, pieces directly comparable to the M1931 were rare.

British Army and U.S. Army both employed 4.5 inch (114 mm) pieces with similar characteristics, and designed to utilize the same ammunition - BL 4.5 inch Medium Field Gun and 4.5 inch Gun M1 respectively. The 5.65-ton M1 fired a 24.9 kg shell to the maximum range of 19.3 km; however the only type of ammunition available for the gun was a HE-frag shell, and that contained only about two kg of explosives.

The gun fired separate loading, cased charge ammunition, with one of four possible propellant charges - the full, no. 1, no. 2 and no. 3 (the smallest).[1] In addition to 122 mm gun shells, the A-19 could fire 122 mm howitzer shells; however because of lesser durability of those shells they could not be used with full charge; use of steely iron howitzer shells O-460A and O-462A was prohibited.[9] 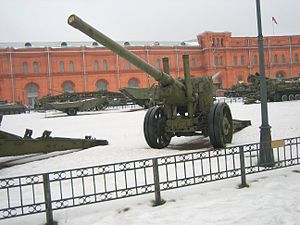 M1931 in the Museum of Artillery and Engineering Forces, St. Petersburg.