12th SS Panzer Division Hitlerjugend ("Hitler Youth") was a German armoured division of the Waffen-SS during World War II. The majority of its junior enlisted men were drawn from members of the Hitler Youth, while the senior NCOs and officers were from other Waffen-SS divisions.

The division committed several war crimes while en route to and during the early battles in Normandy, including the Ascq and Ardenne Abbey massacres. It first saw action on 7 June 1944 as part of the German defensive operations at Caen.

In December 1944, the division was committed against the US Army in the Ardennes offensive. After the operation's failure, which became known as the Battle of the Bulge, the division was sent to Hungary to participate in fighting around Budapest. The division eventually retreated into Austria and surrendered to the 7th US Army on 8 May 1945.

After the war's end, several members of the division, including Kurt Meyer, were convicted of war crimes. 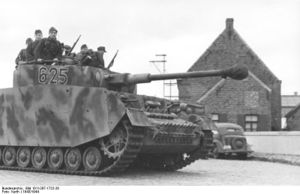 Panzergrenadiers on a Panzer IV during training 1943.

The idea for the Waffen-SS division was first proposed by Artur Axmann, the Nazi leader of the Hitler Youth to Reichsführer-SS Heinrich Himmler in early 1943.[1] The plan for a combat division made up of Hitler Youth members born in 1926 was passed on to Adolf Hitler for his approval. Hitler approved the plan in February and SS-Gruppenführer Gottlob Berger was tasked with recruiting.[1] SS-Oberführer Fritz Witt of SS Division Leibstandarte (LSSAH) was appointed divisional commander.[1] Personnel from the LSSAH provided the regimental, battalion and most of the company commanders for the division.[2]

About 2000 personnel were transferred from the LSSAH and had an decisive influence on the character of the division. The following statement, taken from the surreptitious recording of POWs' conversations by the Allies, illustrates the type of officers that were commanding the new recruits. SS-Untersturmfuhrer originally from LSSAH recounted the following from his time on the Eastern Front near the city of Orel in Russia:[3]

An MG 42 was set up in the main aisle of a church, [...] and the Russian men, women and children were taken into the church, without knowing at all what was happening. Then they were shot immediately with the MG 42 and petrol was poured on them and the whole place was set on fire.

In September 1943, the division had over 16,000 recruits on its roster, undergoing training in Beverloo Camp, Belgium.[1] The indoctrination was often brutal. While in Allied captivity, an SS-man from the division recalled: "In the Waffen-SS you couldn't do anything if an Unterfuhrer hit you during the training. The purpose of the training is to make you just as they are; it's pure sadism." (The comments have also been taken from similar transcripts).[4]

In March 1944 the 12th SS was attached to the I SS Panzer Corps and transferred to Caen in Normandy.[5] At the beginning of June, the division's tank strength was over 150.

The division committed its first massacre while en route to Normandy. The division executed 86 French men on 1 April 1944 in Ascq, France, in a reprisal against the civilian population after the railway they were traveling on was sabotaged. The commander of the convoy, SS-Obersturmführer Walter Hauck, ordered troops to search and arrest all male members of the houses on both sides of the track. Altogether 70 men were shot beside the railway line and another 16 killed in the village itself. In 1949, Hauck was put on trial in Lille, France and was sentenced to death. His sentence was later commuted to life imprisonment. He was freed in 1957 after a further sentence reduction. 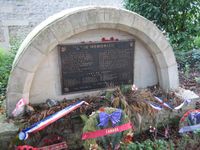 A memorial to the executed Canadian soldiers in the garden of the Ardenne Abbey.
Main article: Ardenne Abbey massacre

A further massacre was committed by the division on its second day of operations during Operation Overlord, the Allied invasion of France. During the evening of 7 June, 11 Canadian prisoners of war, soldiers from the North Nova Scotia Highlanders and the 27th Armoured Regiment (The Sherbrooke Fusilier Regiment), were shot in the back of the head.

Following a year of investigations from August 1944 to August 1945, the Canadian War Crimes Commission (CWCC) strove to discover the details of the murders. As commander of the regiment, Kurt Meyer was the prime suspect.[6] At Meyer’s war crimes trial in December 1945, he was found guilty of inciting his troops to commit murder and of being responsible as a commander for the killings at the Abbey. He was sentenced to death on 28 December 1945; however, his sentence was commuted to life imprisonment in 1946. He was released in 1954.

On 6 June 1944, the division, along with the 21st Panzer Division, were the closest Panzer divisions to the landing beaches, but they were unable to move until they got authorization from the OKW (Wehrmacht High Command). The division was ordered to the front at 1430 hours on 6 June, over twelve hours after the first reports of the landings. Prior to this Field Marshal Gerd von Rundstedt had ordered over half of the division to deal with a parachute landing on the coast near Lisieux which were found to be dummies from Operation Titanic.[7] 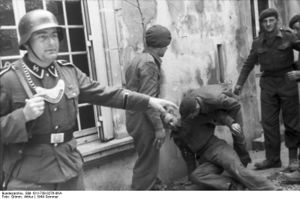 However, they failed to break through the Canadians around Buron, a kilometer to the north. Meyer, however, countermanded the divisional commander's order on his own initiative, feeling that objective unrealistic, and hoped to merely stop the flow of Canadian units inland until the situation could be stabilized.[10]

The attack by the division was supposed to have been supported by the 21st Panzer Division but they could not disengage from fighting the British 3rd Infantry Division and were still at Couvre.[11] Casualties of the 25th SS Panzergrenadier Regiment amounted to about 300 men. 15 tanks from the 12th SS Panzer Regiment were also destroyed.[12]

Late on 7 June, the 26th SS Panzergrenadier Regiment under command of SS-Obersturmbannfuhrer Wilhelm Mohnke arrived on the battlefield. Meyer's attack had pushed back one part of the Canadian advance but to the west of Meyer, the 7th Canadian Infantry Brigade had occupied a group of small villages three kilometres into the German line. The 26th Panzergrenadier Regiment crossed behind Meyer's regiment and took up positions to their west. The 1st Battalion launched an attack towards Norrey-en-Bessin, defended by the Regina Rifles of the 7th Canadian Infantry Brigade, 3rd Canadian Division. Their orders were to overrun the Canadians and force a deep wedge between them and the British division to the west. No reconnaissance of the Canadian positions was done and the infantry met intense defensive fire from firmly established positions.[13] 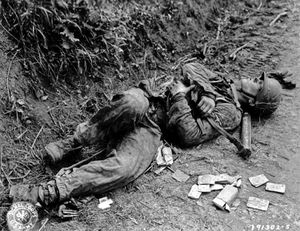 The attack, launched at 0330 hours, 8 June had little initial success. The various companies in the attacking battalion failed to coordinate their moves towards the Canadians and, despite high casualties, Canadian artillery and supporting heavy machine guns of the Cameron Highlanders of Ottawa took a heavy toll on each attacking company of SS troops. The Regina Rifles held their ground and the 1st Battalion fell back. The division was criticized for performing inadequately in the opening days of the Normandy campaign.[9] and Canadian Brigadier Harry Foster later noted that "no use was made of the fact that the Reginas' flanks were exposed; instead, the enemy flung himself straight against the strongest points and utterly failed to exploit the undoubted weakness of his opponent's position".[14]

On the Canadian right the 2nd Battalion attacked the Royal Winnipeg Rifles defending the village of Putot-en-Bessin at 0630 hours. The Battalion managed to break into the village and surround several companies, effectively pushing the Winnipeg Rifles out of the village by 1300 hours and inflicting 256 casualties – of which 175 were taken prisoner. However, later that day, a counterattack by the Canadian Scottish Regiment, with artillery, tank and tank-destroyer support, re-took Putot with the SS giving up the struggle for the town and withdrawing around midnight.[15] 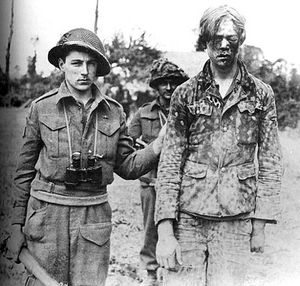 9 August 1944 A captured member of the division, with Canadian guards.

The 3rd Canadian Division ceased major combat operations until July, with only one day of major operations, on 11 June, at Le Mesnil-Patry. This saw the 12th SS inflict major casualties to the Queen's Own Rifles of Canada and the 1st Hussars (6th Armoured Regiment) which lost 51 Sherman tanks during the attack.[16] Also on 11 June the 46th Royal Marine Commando assaulted Rots. The official historian of Le Régiment de la Chaudière, described the "ferocious battle" including hand-to-hand fighting and "smoldering" tanks: "from each blackened turret hangs the charred corpse of a machine gunner".[17] The division was driven from its positions in Buron and nearby villages of Gruchy and Cussy, and the divisional command post in the Ardenne Abbey, which had been occupied since before D-Day, was also lost.[18] Witt was killed in action by a Royal Navy naval artillery barrage which hit the divisional command post at Venoix on 14 June 1944. Kurt Meyer was placed in command of the division.[19]

During their retreat from France, members of the LSSAH and the Hitlerjugend division murdered 34 French civilians in the towns of Tavaux and Plomion.[20] The units in the division that were not fit for combat were ordered to pull back to Germany on 8 September, leaving behind a small Kampfgruppe attached to the SS Division Das Reich.[21]

The division losses during the fighting in Normandy, in the three months from June to September, amounted to 80% of its troops, over 80% of its tanks, 70% of its armored vehicles, 60% of its artillery and 50% of its motor vehicles.[22]

In September, SS-Obersturmbannführer Hubert Meyer was placed in command of the division.[23] The operation opened on 16 December 1944, with Kampfgruppe Peiper from the 1st SS Panzer Division Leibstandarte SS Adolf Hitler breaking through the American lines with some difficulty. After the 12th SS reached the front, it was met with heavy resistance from American troops stationed on the Elsenborn Ridge. Despite repeated efforts, the division could not budge the American defenders. As a result, the division was ordered to swing left and follow the advance line of the remainder of the 1st SS Panzer Division. American troops prevented the division from reaching its objective, and after the destruction of Kampfgruppe Peiper from the LSSAH, the advance of Dietrich's forces were altogether stopped. On 8 January Hitler gave the authorization to withdraw. The attack was ultimately a failure. The 12th SS had been severely mauled, with only 26 tanks and assault guns and an average of 120 men remaining in each battalion.[24] In total during the offensive the division had lost 9,870 men which included 328 officers and 1,698 NCO's.[25] By 28 January 1945, the 12th SS, along with all the German forces, had been pushed back to its starting positions.

On 14 January 1945, Dietrich's 6th SS Panzer Army was ordered to Hungary where it was to take part in an offensive to recapture the Hungarian oilfields and open the way to Budapest,[25] where 45,000 men of the IX SS Mountain Corps had been encircled. While the division was in transit, the IV SS Panzer Corps launched several unsuccessful relief operations. The division, alongside the LSSAH as a part of I SS Panzer Corps arrived in Hungary in early February 1945, a few days before the city fell. The division next took part in Operation Spring Awakening, the operation to retake the Hungarian oilfields. The attack got underway on 6 March 1945; after initial success, the combination of the muddy terrain and strong Soviet resistance ground them to a halt.[26] On 16 March, the Soviet forces counterattacked in strength, driving the entire southern front into a retreat towards Vienna. The Soviet forces took Vienna on 13 April.[27] Retreating through Odenburg and Hirtenberg, the division reached Linz, Austria near the American lines. On 8 May 1945, 10,000 men of the division surrendered near the town of Enns to the troops of the 65th Infantry Division commanded by Major General Stanley Eric Reinhart.[28]