For many years, the M-46 was one of the longest range artillery systems around, with a range of more than 27 km.

A second "duplex" artillery system was subsequently designed by FF Petrov's design bureau at Artillery Factory No 9. This comprised a 122 mm Gun and a 152 mm Howitzer. The 122 mm Gun D-74 was a competitor to the M-46; and while many were produced, the M-46 became the only long range Gun in Soviet service until new 152 mm Guns in the 1970s.

The M-46 was developed from the M-36 130 mm naval gun used on ships and for coast defence. It is a true gun, being unable to fire much above 45° and having a long barrel and a single propelling charge.

It has a 52 calibre barrel with a tied jaw horizontal sliding block breach and ‘pepperpot’ muzzle brake. The latter is not notably efficient, but subjective reports suggest that it is quite effective in reducing muzzle flash. The hydro-pneumatic recoil system comprises a buffer below the barrel and a recuperator above the barrel. The long barrel enables a substantial propelling charge by providing more length in which to achieve ‘all-burnt’ and hence projectile acceleration space and thus achieve its 930 m/s muzzle velocity.

The barrel is mounted on a split-trail carriage, with deep box section trails and foam filled road wheels on the ground when firing and 50° of top traverse. The small shield protects little more than the sights, possible including from the effects of muzzle blast, and some protection from machine gun fire in anti-tank engagements. The gun has long and robust trails to provide stability when firing, a large detachable spade is fitted to the end of each when the gun is brought into action.

Non-reciprocating sights are standard Soviet pattern, designed for one-man laying. Included are a direct fire anti-tank telescope, a panoramic periscopic indirect-fire sight (a dial sight) in a reciprocating mounting, an angle of sight scale, and a range drum engraved with the range (distance) scale, coupled to a mounted elevation levelling bubble. The range drum enables the standard Soviet technique of semi-direct fire when the piece is laid visually on the target and the range set on the range drum. An APN-3 was later provided for direct fire at night in place of the day telescope.

For travel, the gun is towed via a two-wheeled limber fitted to the end of the closed trails, with the spades removed and carried on each trail. Simple jacks on the trails just behind the main wheels are used to lift and support the closed trails so that the limber can be connected. The barrel and recuperator are pulled back between the closed trails and locked in a travelling position. There is a large bicycle chain arrangement on the right trail for this, and a compressed air cylinder, charged by the gun firing, is used to bring the barrel forward when the gun is brought back into action. It takes about four minutes to bring the gun into action, the normal detachment is eight strong.

Propelling charges are in metal cartridge cases and loaded separately from the projectile. Projectiles originally included HE fragmentation, Armour Piercing solid shot, smoke, illuminating and chemical. HE shells weigh some 33 kg. Illuminating shells have a substantially lower muzzle velocity. APHE and extended range shells were introduced later. Maximum rate of fire is probably 6-7 rounds/minute, and about 70 rounds/hour. The standard Soviet unit of fire was 80 rounds.[2][3][4]

The M-46 was first seen openly at the 1954 May Day Parade in Moscow. It initially replaced the 100 mm BS-3 field and anti-tank gun. However, its long range made it well suited for counter-battery actions - some western troops on its receiving end have reported poor fragmentation, and large fragments would be consistent with the counter-battery purpose. Its Soviet use with an integrated fire control system including SNAR-2 radars has also been reported. In Soviet service, M-46 battalions were in Army and Front artillery brigades.

It is or has been in service with at least 25 countries and has been license manufactured in China as the Type 59. It was replaced in Soviet/Russian inventory by the 2A36 Giatsint-B and the self-propelled 2S5 Giatsint-S. Several companies, like Soltam and RDM Technology BV, have presented upgrade packages for the gun. These include, for instance, an upgrade to a 45 caliber 155 mm gun.

The M-46 saw extensive use by the NVA in Vietnam War, especially at the siege of Khe Sanh. It was regarded by both sides as the best all-round field artillery of the Vietnam War.[5]

A version of this gun, possibly the Chinese-manufactured Type 59-1, is suspected to have been used by North Korea for shelling the South Korean island of Yeonpyeong in the Yellow Sea on 23 November 2010. 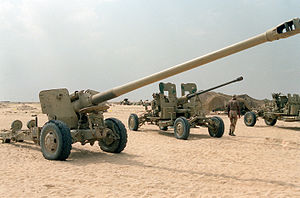 The US Defense Intelligence Agency has reported the existence of a number of locally designed self-propelled artillery systems, including the SPG 130mm M1975, the SPG 130mm M1981 and the SPG 130mm M1991. Details are not available, but they appear to be M-46/Type 59s mounted on a tracked chassis “Tokchon”.[6] 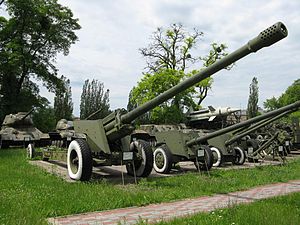 Unless stated, figures are sourced from Jane's Armour and Artillery [12] 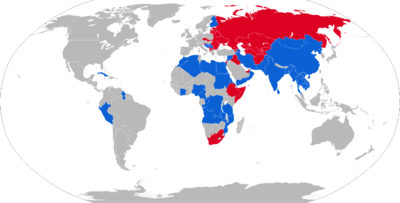 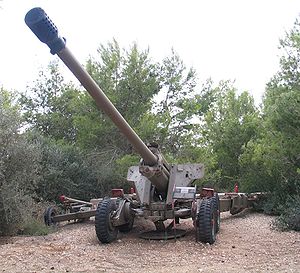 M-46 in an Israeli museum. Note that the carriage is fitted with an extra axle and wheels to give a 'walking' suspension, and a sole plate has been added. 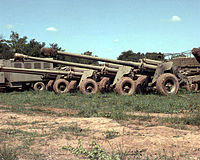