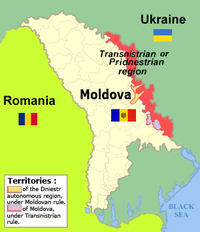 The involvement of the Soviet 14th Guards Army in the War of Transnistria was extensive and contributed to the outcome, which left the Pridnestrovian Moldavian Republic (PMR) with de facto independence from the Republic of Moldova.

The 14th Army was formed as a unit of the Soviet Army on 25 November 1956 from the 10th Guards 'Budapest' Rifle Corps, formerly part of the Odessa Military District with headquarters in Chişinău.[1]

In 1960 the following divisions were assigned to the army:[2]

On 3 November 1967 the army was renamed the 14th Guards Combined Arms Army.

In 1968 the 48th MRD took part in the Warsaw Pact invasion of Czechoslovakia, and then joined the Central Group of Forces there.

In the 1980s the army headquarters was moved to Tiraspol, within the then Moldovan Soviet Socialist Republic. By 1991, the army was made up of four motor rifle divisions and other smaller units. Only the 59th Guards Motor Rifle Division and some smaller units, including the 1162nd Anti-Aircraft Rocket Regiment were on the left bank of the Dniester in the region of Transnistria.[3] Other formations, including the 28th Guards and 180th Motor Rifle Divisions, were over the border in Ukraine and became part of the Ukrainian Ground Forces. According to the Army sources, local Transnistrians made up the great majority of its soldiers, including 51 percent of the officers and 79 percent of the draftees.[4]

On November 19, 1990, the 14th Guard Army beside the above-mentioned units additionally included:

While the official policy of the Russian Federation early after the outbreak of the widespread armed conflict in 1992 was one of neutrality, many soldiers and officers of the 14th Army were sympathetic to the PMR cause and had defected to the PMR and actively participated in the fighting as part of its armed forces, the Republican Guards. Furthermore, a considerable amount of the army’s materiel was taken without resistance or given to the PMR armed forces.[6]

The commanding officer of the Army, General G. I. Yakovlev, was openly supportive of the newly created PMR. He participated in the founding of the PMR, served in the PMR Supreme Soviet and accepted the position as the first chairman of the PMR Department of Defense on 3 December 1991, causing the Commander-in-Chief of the CIS armed forces, Yevgeny Shaposhnikov, to relieve him of his rank and service in the Russian military.[7] Yakovlev's successor, General Yuriy Netkachev has assumed a more neutral stance in the conflict.[8] However, his attempts at mediation between Chişinău (capital of Moldova) and Tiraspol (capital of PMR) were largely unsuccessful.[9]

On 23 March 1992, Shaposhnikov signed a decree authorising the transfer of military equipment of 14th Guards Army units stationed on the right bank of the Dniester to the Republic of Moldova. This military equipment had constituted the majority of the materiel utilized by the Moldovan army in the ensuing War of Transnistria. A second decree, issued on 1 April by Boris Yeltsin, transferred the personnel of the 14th Guards Army, as well as all left-bank military equipment, including a large weapons stockpile at Cobasna, under Russian jurisdiction.[10]

By June 1992 the situation had escalated to an open military engagement. With the near disintegration of the army during the heaviest fighting in and around the city of Bendery, in the wake of a coordinated offensive by Moldovan forces, General Major Alexander Lebed arrived at the 14th Army headquarters on 23 June with standing orders to stop the ongoing conflict with any available means, inspect the army, prevent the theft of armaments from its depots and ensure the unimpeded evacuation of armaments and Army personnel from Moldovan and through Ukrainian territory. After briefly assessing the situation, he assumed command of the army, relieving Netkachev, and ordered his troops to enter the conflict directly. On 3 July at 03:00, a massive artillery strike originating from the 14th Army formations stationed on left bank of the Dniester obliterated the Moldovan force concentrated in Hîrbovăț forest, near Bendery, effectively ending the military phase of the conflict.[9][10][11] According to at least one Moldovan source, 112 Moldovan soldiers were killed by the bombardment.[12]

After the end of the conflict, a separate Russian unit was moved into the region as part of the joint Russian-Moldovan-Transnistrian peacekeeping force, the Joint Control Commission. The 14th Guards Army itself was reformed in April 1995 into the Operational Group of Russian Forces in Moldova which came under the command of the Moscow Military District and was charged with guarding the weapons stockpile at Cobasna.[10] The force is now around 1200 strong, and according to Kommersant-Vlast in 2005, consisted of the 8th Guards Motor Rifle Brigade, the 1162nd Anti-Aircraft Rocket Regiment, 15th Signals Regiment, and other support units.[13]

In December 2002 the brigade was disbanded, and the remaining personnel, numbering 5,719 effectives were absorbed into the Peacekeeping Forces command.

As a result of reduction in the strength of the Operational Group (commander General-Major Boris Sergeyev) the remaining strength as of 2006 is about 1,000 – 1,500 troops, and comprises:[14]

The operational group is as of September 2006[update] commanded by Major General Boris Sergeyev of Russia and numbers 1,199 troops. It serves alongside the Joint Control Commission.[15]

On 18 November 2008, the NATO Parliamentary Assembly adopted a resolution, urging Russia to "respect its commitments which were taken at the Istanbul OSCE Summit in 1999 and withdraw its illegal military presence from the Transnistrian region of Moldova in the nearest future."[16]