Post World War II, the D-1 saw combat in numerous conflicts during the mid- to late 20th century. The long operational history of D-1 howitzers in national armies of numerous countries is a testimony to its qualities; the gun still remains in service in a number of post-Soviet states and some other countries. The D-1 is widely considered a valuable element of Soviet artillery.[1][2]

However, the rifle corps were re-established in late 1942 and the previous organization of artillery at the corps level was reintroduced. As a result of the halting of 152 mm howitzer production, the Red Army corps artillery lacked a weapon more mobile than the heavy 152 mm howitzer-gun M1937 (ML-20) (typically employed by army-level and Reserve of the Main Command artillery units), but more powerful than the 122 mm howitzer M1938 (M-30).

Response to the challenge

In 1942, trying to solve the problem of lack of a suitable mobile 152 mm howitzer, the design bureau headed by F. F. Petrov started to work privately on a new howitzer, based on the carriage of the M-30 and the barrel of the M-10 (which was fitted with a muzzle brake in order to reduce the recoil and thus prevent damage to the lighter carriage). The approach allowed production to begin on the new howitzer almost immediately from the stockpile of parts for both earlier guns. Given the war situation and shortages of artillery, this solution was both elegant and expedient.

Early in 1943 Petrov notified the People's Commissar of Armaments Dmitriy Ustinov about the new project. On 13 April Ustinov informed Petrov that the State Committee of Defence had requested for five of the new guns to be sent to the testing grounds on 1 May. On 5 May, two pieces were received for trials; two days later, on 7 May the gun was recommended for adoption, and on 8 August 1943 it was officially adopted as the 152 mm howitzer M1943. One and a half months later, the first series production D-1 howitzers were delivered to the Red Army representatives.[1][2]

The D-1 was manufactured solely at No. 9 Plant (UZTM) in Sverdlovsk from late 1943 to 1949. During World War II, the howitzer was only produced in small numbers because Plant No. 9 was also responsible for the mass production of the 122 mm howitzer M-30. This resulted in critical shortages of the 152 mm howitzers in the Red Army corps artillery until the end of the war.[2] 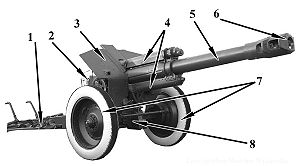 The D-1 howitzer was essentially a combination of the barrel of the 152-mm howitzer model 1938 (M-10) on the carriage of the 122-mm howitzer M1938 (M-30). Since the new carriage was lighter than that of the M-10, the barrel was fitted with a massive double-baffle muzzle brake DT-3 to soften the shock of recoil. The breech block was of interrupted screw type, the recoil system consisted of a hydraulic buffer and a hydro-pneumatic recuperator. The separately loaded ammunition included a variety of shells and eight different propellant charges in cartridges.

The carriage was nearly identical to the carriage of the M-30. It had suspension and steel wheels with pneumatic rubber tires. The trails were initially of riveted construction, but were eventually replaced in production by welded ones. Late production pieces were equipped with caster wheels to ease manhandling. Time to set up for combat was about two minutes. In an emergency it was possible to fire without splitting trails; however this was at the price of a drastically reduced traverse (1°30'). Since the gun was not equipped with a limber, it could be towed only by vehicle. The maximum towing speed was 40 km/h on paved roads, 30 km/h on cobbled roads and 10 km/h off-road. To give the crew some protection from bullets and shell fragments, the gun was fitted with a shield.[1][2][3]

From a technical and tactical point of view, the D-1 project provided the Red Army (RKKA) corps artillery with a modern 152 mm howitzer, which combined both good mobility and firepower. When compared with a typical contemporary howitzer of similar caliber, the D-1 had shorter range, but was much lighter. For example, the German 15 cm sFH 18 had a range of 13,325 meters - about one kilometer longer than that of the D-1 - but also weighed almost two tons more (5,510 kilograms in traveling position). The same can be said of the US 155-mm howitzer M1 (14,600 meters, 5,800 kilograms) or the 149 mm howitzer manufactured by the Italian Ansaldo (14,250 meters, 5,500 kilograms). A German howitzer with characteristics similar to those of the D-1 — the 15 cm sFH 36 — did not reach mass production. Compared with older pieces such as the French Schneider model 1917 (11,200 meters, 4,300 kg), the D-1 had the advantage in both weight and range.

The D-1 was employed by corps artillery and the reserve of the main command units. In 1944, the rifle corps of the Red Army had one artillery regiment each. Those regiments consisted of five batteries (totaling 20 guns), equipped with the D-1 along with various other 152 mm howitzers, 122 mm gun M1931/37 (A-19), 152 mm howitzer-gun M1937 (ML-20) or 107 mm gun M1910/30. Reserve of the Main Command included howitzer regiments (48 pieces) and heavy howitzer brigades (32 pieces). Those could be merged to form artillery divisions.[2]

The Red Army employed D-1 howitzers from 1944 onwards, during the final stages of World War II. The D-1 was used primarily used against personnel, fortifications and key structures in the enemy rear. The anti-concrete G-530 shell was also sometimes used against armored vehicles with good results. During its service the gun earned a reputation for being reliable and accurate.[1] The D-1 was finally withdrawn from service in the mid-seventies.

After the war the gun was supplied to many countries around the globe, including former Warsaw Pact allies, such as Poland. As of the early 2000s it remains in service in Afghanistan, Albania, China, Cuba, Hungary, Iraq, Mozambique, Syria, Vietnam and other countries. The gun was employed in the Arab-Israeli Conflict and also in some conflicts in former republics of Soviet Union.[2] The long operational history of D-1 howitzers in the national armies of numerous countries is an additional testimony to its qualities.

Surviving D-1 howitzers can be seen in various military museums and war memorials, e. g. in the Museum of Artillery and Engineering Forces, Saint Petersburg, Russia; in the Museum of Heroic Defense and Liberation of Sevastopol on Sapun Mountain, Sevastopol; in the Museum of the Great Patriotic War, Kiev, Ukraine; in Poznań Citadel, Poland and in Polatsk, Belarus, as a memorial piece.

In addition to the towed howitzer, Petrov's team developed a vehicle-mounted variant of the D-1. Red Army offensive operations in the summer and fall of 1943 reawakened interest in the idea of a heavy "artillery" tank similar to the KV-2, that could provide close fire support to rifle and tank units and would be capable of demolishing heavy fortifications. Probable causes for the development of such a vehicle were the cessation of mass production of the SU-122 medium assault gun and diversion of SU-152 heavy assault guns for anti-tank actions. The tank variant of the D-1 was originally intended for mounting in a variant of the KV-1s heavy tank. It utilized the mount of the 85 mm D-5, leading to the unofficial name D-1-5 and eventually to the official designation of D-15. Only one example was built. There is no information about the gun being mounted in the KV tank. By October 1943 Soviet authorities were anticipating the start of mass production of the powerful IS-2 heavy tank; as a result the idea of a specialized artillery tank based on the obsolete KV chassis was dropped.[4]

Another project combining the T-34 tank chassis with the D-15 gun was also considered. Designated SU-D15, the medium assault gun was intended as a replacement for the SU-122. Although the project received a lot of support from the authorities it never entered production, both because of its shortcomings (the heavy gun put too much strain on the suspension and ammunition stowage was too limited) and because it was made redundant by the ISU-152. However lessons learned mounting a powerful gun in the T-34 allowed for rapid development of the SU-100 tank destroyer.[5] 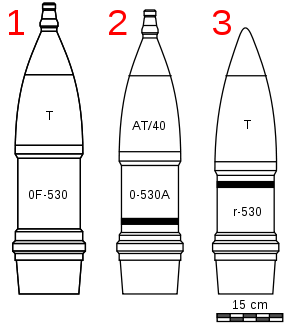 The D-1 had a large variety of ammunition, including high-explosive, armor-piercing, HEAT, shrapnel, illumination, and chemical.

The D-1 used separate loading ammunition, with eight different charges. The charges included the "full charge" Zh-536 and smaller charges ranging from the "first" to "sixth", which was the smallest. A "special charge" was used with the BP-540 HEAT projectile. Propellant charges were produced in "full" and "third" variants in munitions factories. All other charges were derived from them by removing small gunpowder bags from the charge cartridge. For flash suppression there was a special chemical mixture which was to be inserted into a cartridge before night firing.[3] 152 mm projectiles for the D-1 weighed about 40 kg; a difficult job for the loaders, who had to carry the projectiles alone.

When set to fragmentation mode, the OF-530 projectile produced fragments which covered an area 70 meters wide and 30 meters deep. When set to high-explosive (HE) action, the exploding shell produced a crater about 3.5 meters in diameter and about 1.2 meters deep.[1] Despite the D-1's withdrawal from service in the mid- 1970s, the OF-530 is still fired from modern 152 mm ordnance pieces of the Russian Army.

The G-530 HEAC anti-concrete shell had a muzzle velocity of 457 m/s when fired with the "first" charge. At a range of one kilometer it had a 358 m/s terminal velocity and was able to punch through up to 80 centimeters of reinforced concrete before detonating a TNT charge which increased the total penetration to 114 centimeters. The G-530 could not be fired with a "full" charge without putting the crew at risk of having the shell explode in the barrel. A special version of the shell, the G-530Sh, was developed to allow use with the full charge.[3]

In the late 1950s old ammunition stocks for the D-1 were removed from the Soviet inventory. The only shells retained were the OF-530, O-530, G-530/G-530Sh, and possibly chemical shells. The Soviet Army also possessed a 152 mm nuclear shell, but it is not clear whether that shell could be used with the D-1.[6]