The 2A65 "Msta-B" is a Soviet towed 152 mm howitzer. The "B" in the designation is an abbreviation for Buksiruyemaya, which means towed. This weapon has been fielded in Russian forces since at least 1987 and is currently in service with Russian front and army level artillery units. The 2A65 howitzer, like many pieces of modern artillery, is capable of firing nuclear artillery shells.

In addition to the towed 152 mm 2A36 gun covered in detail in a separate entry, Russia also deployed a new 152 mm towed howitzer, designated the 2A65, which was allocated the NATO designation of the M1987. This was the year that the weapon was first identified by Western intelligence. According to United Nations sources there were no exports of this weapon between 1992 and 2006. The 152 mm 2A65 is also referred to as the MSTA-B and the weapon forms the main armament of the 152 mm self-propelled artillery system, the 2S19, which is also referred to as the MSTA-S. Full details of the latter are given in a separate entry. In the designation MSTA-B the latter stands for Buksiruemyi, or towed.

The 152 mm howitzer 2A65 (M1987) is mounted on a conventional split trail carriage and, when deployed in the firing position, rests on three points, the hydraulic circular firing jack under the forward part of the carriage and the two spades at the rear. Each of the box section trails has a caster wheel to assist the gun crew in bringing the weapon into action. When deployed in the firing position, these swing upwards through 180° and rest on top of each trail. The 152 mm ordnance is fitted with a muzzle brake and a semi-automatic breech mechanism, spring-operated ramming system, hydraulic counter-recoil device and a liquid-cooled recoil brake. Elevation and traverse is manual, two-speed, with the direct and indirect sighting devices being located on the left side of the weapon. Pneumatic brakes are fitted as standard.

The gun fires the same 152 mm ammunition types as the 152 mm 2S19 self-propelled artillery system and, more recently, a new family of separate loading (for example projectile and charge) 152 mm has been introduced. The standard OF45 high-explosive projectile weighs 43.56 kilograms, has a maximum muzzle velocity of 823 meters per second and a maximum range of 24.7 km. The charges include OF72 (long range), OF58 (full charge) and OF73 (reduced charge). The OF45 projectile can be fitted with different rear ends, for example various types of screw-on boat tails, or the OF61 base bleed projectile which weighs 42.86 kilograms, has a maximum muzzle velocity of 828 m/s and a maximum range of 29 km. The OF23 cargo projectile weighs 42.8 kg, has a maximum range of 26 kilometers and contains 42 High-Explosive Anti-Tank (HEAT) bomblets, each of which can penetrate 100 millimeters of conventional steel armour. Other types of projectile include the HS30 jamming round and the Russian 152 mm Krasnopol laser-guided projectile, which is covered in the entry for the 2S19 self-propelled artillery system. A 155 mm version of this system has been developed but as far as it is known this has not been exported. China has developed a new 155 mm/52 calibre SP artillery system called the PLZ52. This has a turret very similar to the 2S19. In addition to these new 152 mm projectiles the 2A65 can fire all standard types of 152 mm ammunition fired by the older Russian D-20 towed gun-howitzer and the 2S3 self-propelled gun-howitzer.

The howitzer is towed by either the KrAZ-260 6x6 truck or the Ural 4320 6x6 truck. The gun consists of a distinctive four-wheeled carriage, and has an armored shield that slopes to the rear and extends over the wheels. It has been fielded since 1987 and was first deployed by Soviet forces in Eastern Europe.

A self-propelled version, the 2S19 "Msta-S", is produced. 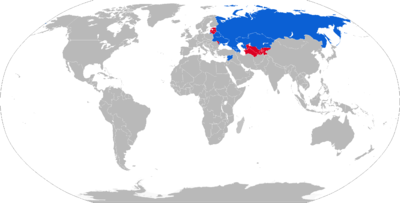