From Infogalactic: the planetary knowledge core
Jump to: navigation, search
Not to be confused with the American 155 mm Long Tom.

The 155 mm Creusot Long Tom was a French field gun (artillery piece) manufactured by Schneider et Cie in Le Creusot, France and used by the Boers in the Second Boer War. The guns had a De Bange-type breech.[1]

Four guns,[2] along with 4,000 common shells, 4,000 shrapnel shells and 800 case shot were purchased by the South African Republic (informally known as the Transvaal) in 1897. The guns were emplaced in forts around Pretoria. 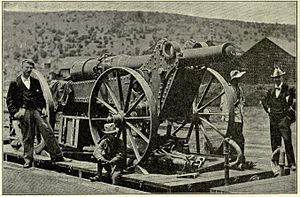 Long Tom being transported to the Siege of Kimberley 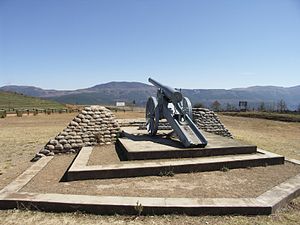 During the Second Boer War the guns were deployed as field guns and siege guns at Vaal Krantz,[3] Ladysmith, Mafeking, Kimberley and Bergendal. During the early stages of the war these guns gave the Boers an advantage as they had longer range than any British guns that were deployed in South Africa at the time.[4] After all their ammunition had been expended, the guns were destroyed one by one, to prevent them from falling into British hands.

Long Tom shells are incorporated in the Honoured Dead Memorial in Kimberley, commemorating those who fell in the town's defence, where they surround the gun called Long Cecil (built in Kimberley during the siege by George Labram, and a catalyst in the Boers bringing Long Tom to the siege).

Replicas of the original cannons can be seen at various places in South Africa, including Fort Klapperkop near Pretoria, in the Long Tom Pass in Mpumalanga, The Anglo-Boer War Museum in Bloemfontein (formerly the War Museum of the Boer Republics) and next to the town hall in Ladysmith.